CHICAGO (AP) — Two men were charged with murder and other felonies Friday in the December attacks on 14 people in Chicago, including a man who was beaten to death with a crowbar and baseball bat while hanging Christmas lights on his home. 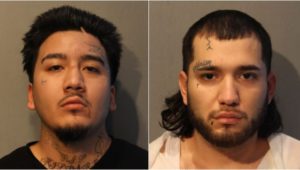 Chicago Police Superintendent David Brown and Cook County State’s Attorney Kim Foxx said at a news conference that the 49-year-old Tellez was hanging lights on his home in the Gage Park neighborhood on the city’s Southwest Side the evening of Dec. 11 when the two suspects attacked. The other 13 victims survived.

Police said the violence began around 3:30 p.m. and continued until 8 p.m., as they drove from the North Side of the city to the South Side.

Foxx said Tellez “was doing what many of us were doing and and should expected to do during the holidays, hanging Christmas lights with his daughter before being tragically and senselessly beaten to death.”

Police said the two pulled up, grabbed the bat and crowbar, and climbed out of the vehicle.

“They decided they were going to target him and rob him as well,” said Chief of Detectives Brendan Deenihan. “And… the daughter heard the screams and saw out the window what was happening and tried to get her brother to help but by that time the defendants had already beaten him to death and fled the scene.”

Deenihan said that Barrios was arrested the same day on suspicion of committing one of the robberies. But after his arrest, police found in what they believed was the car he and Mendiola were driving. Inside the vehicle, they recovered a crowbar and baseball bat they suspect were used in the attacks.

The suspects were linked to the crimes with the help of DNA evidence and fingerprints from the weapons as well as surveillance video and license plate identification technology, Deenihan said.

Mendiola and Barrios were expected to appear in bond court on Friday afternoon.