HONOLULU (AP) — Three Honolulu police officers appeared in court on Friday to face charges in connection with the fatal shooting of a 16-year-old Micronesian boy, the first cases of their kind against law enforcement in the city in more than 40 years. 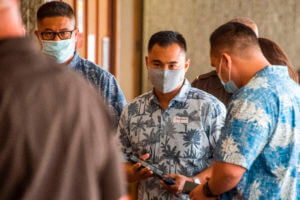 The officers were not asked to enter pleas during the hearing, when they were officially informed of the charges that they face.

The April 5 shooting killed Iremamber Sykap, who police and prosecutors have said was driving a stolen car linked to an armed robbery, burglary, purse-snatching and car theft. Sykap led officers on a chase immediately before the shooting, authorities have said.

Officer Geoffrey H.L. Thom fired 10 rounds at Sykap through the rear window of the Honda using a 9 mm Glock semi-automatic firearm, prosecutors said. The five-year police department veteran fired the shots “without provocation” after the car came to a stop at an intersection, according to court documents.

Thom was charged with one count of second-degree murder. If convicted, he faces a minimum sentence of 20 years because of the kind of gun used in the shooting.

Attorneys for the three officers said in a statement that “it is clear that most in our community believe that filing these charges after an independent Grand Jury rejected them is concerning, to say the very least.”

The statement added: “While we recognize the tragedy of this situation, we as their attorneys will do all that we can to prevent wrongful convictions in this case.”

The officers, who each wore blue aloha shirts, didn’t speak in court. A judge scheduled a preliminary hearing for July 20.

Friday’s court appearance drew hundreds of supporters of the officers to the plaza in front of the downtown courthouse.

Many wore T-shirts saying “Support our Officers” and chanted “free the three!”

Brandon Wolff joined along with about 80 fellow members of the Longshoremen Brotherhood community service group.

“They’re not murderers, and they are heroes because what they did was they stopped these criminals who were on an active crime spree,” he said.

Wolff said he was troubled that the officers were being made into “the bad guys.”

“We know, because we live in these communities, how much of an asset they are to us. We know what they do. They protect us. They serve us daily,” he said.

Wolff said police won’t be able to adequately respond to threats and do their jobs if they are prosecuted like this. “The good guys are going to die,” he said.

Sykap was born in Guam, a U.S. territory, to a family from Chuuk in the Pacific island nation of Micronesia.

Some in the Micronesian community said the shooting highlighted the racism they face in Hawaii, belying the state’s reputation as a tolerant and diverse melting pot of ethnicities and cultures. Micronesians comprise a small minority in Hawaii, numbering about 15,000 to 20,000 out of a state of nearly 1.5 million.

Prosecutors say Thom hit Sykap with eight of the 10 shots he fired, striking the teenager in the back of the head, neck, back and left arm. The bullet that hit Sykap in the back of his head fractured his skull and entered his brain.

Court documents say the Honda was apparently in drive mode at the time. It started moving forward and struck an empty patrol car after the shots were fired.

Ah Nee fired four shots as the Honda climbed a sidewalk and went through a fence before landing in a canal, prosecutors said. Two of these rounds hit Sykap’s brother, Mark Sykap, in the front passenger seat.

Fredeluces allegedly fired one shot at Iremamber Sykap but didn’t hit him.

One passenger ran from the car before the shooting carrying a bag that police later found contained a starter pistol, prosecutors said in court documents. The police department’s firearms expert concluded the pistol did not constitute a firearm, the documents said.

Prosecutors said they brought the charges after reviewing 1,300 pages of police reports, 70 body camera videos and more than 40 videos from cameras in the area. They also reviewed the “use of force” histories of the accused and other evidence.

Sykap’s family has sued the city and police, alleging negligence, assault and battery.