COLUMBUS, Ohio (AP) — A magistrate judge on Friday set bond at $3 million for the white former Ohio police officer charged with murder in the December shooting death of Andre Hill, a Black man. The ex-officer, Adam Coy, pleaded not guilty on Friday. 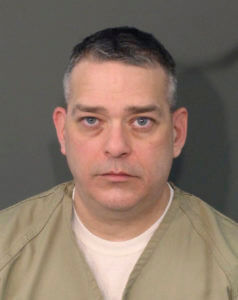 Coy was indicted by a grand jury Wednesday following a monthlong investigation by the Ohio Attorney General’s Office into the fatal shooting of Hill, 47, on Dec. 22.

The Ohio Attorney General’s Office, which is prosecuting Coy, argued that the high bond was necessary given the facts of the case. Saken also ordered Coy not to have contact with any witnesses in the case, including other police officers.

The charges faced by Coy, a 19-year member of the force, also include failure to use his body camera and failure to tell another officer he believed Hill presented a danger. Bodycam footage of the confrontation shows Hill emerging from a garage holding a cellphone with his left hand and his right hand not visible, before being shot by Coy. No weapon was found at the scene.

While Hill’s family welcomed the news of Coy’s indictment, data shows and experts conclude that Yost and the prosecution team will face a hard battle to secure a conviction. 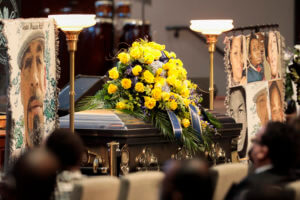 FILE – Flowers and blankets are placed near the casket of Andre Hill during his funeral on Tuesday, Jan. 5, 2021 at First Church of God in Columbus, Ohio.  (Joshua A. Bickel/The Columbus Dispatch via AP)

Only 46% of cases of on-duty police shootings in which murder or manslaughter charges were brought over the past 16 years ended up in convictions, according to data compiled by Philip Stinson, a criminal justice professor at Bowling Green State University in Ohio.

The overall rate for murder convictions among the general population is about 70%, according to U.S. Bureau of Justice Statistics data.

Collins, Coy’s attorney, has already signaled a possible defense for their case. On Wednesday, he said Coy will fight the charges based on U.S. Supreme Court case law that examines such use of force incidents through the eyes of a “reasonable police officer.”

Collins added that his client has fully cooperated with investigators up until this point and “honestly believed that he saw a silver revolver coming up in the right hand of the individual.”

Farnoush Amiri is a corps member for the Associated Press/Report for America Statehouse News Initiative. Report for America is a nonprofit national service program that places journalists in local newsrooms to report on undercovered issues.