WASHINGTON (AP) — The American Civil Liberties Union sued the Trump administration Thursday, alleging officials violated the civil rights of protesters who were forcefully removed from a park near the White House by police using chemical agents before President Donald Trump walked to a nearby church to take a photo. 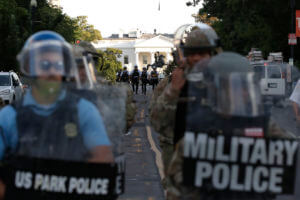 Police clear the area around Lafayette Park and the White House as demonstrators gather to protest the death of George Floyd, Monday, June 1, 2020, in Washington. Floyd died after being restrained by Minneapolis police officers. (AP Photo/Alex Brandon)

The lawsuit, filed in federal court on Washington, comes as Attorney General William Barr defended the decision to forcefully remove the peaceful protesters, saying it was necessary to protect officers and federal property.

The suit argues that Trump, Barr and other officials “unlawfully conspired to violate” the protesters’ rights when clearing Lafayette Park on Monday. Law enforcement officers aggressively forced the protesters back, firing smoke bombs and pepper balls into the crowd to disperse them from the park.

Barr said he had met with other law enforcement officials earlier Monday and decided they needed to extend a security perimeter around the White House to protect federal agents “who could be reached by projectiles from the street.” He expected the perimeter to be moved in the early afternoon, but when he arrived in the evening, shortly before Trump was set to speak at a news conference, he learned it wasn’t done and ordered law enforcement officials to take action.

After the crowd was dispersed, Trump, followed by an entourage of his most senior aides — including Barr — along with Secret Service agents and reporters, walked over to St. John’s Church, the landmark pale-yellow building where every president, including Trump, has prayed, that had been damaged Sunday night in a protest fire. Barr said Trump, as the nation’s chief executive, had every right to do so and claimed it wasn’t political.

“I don’t necessarily view that as a political act. I think it was entirely appropriate for him to do,” Barr said.

U.S. Park Police launched an investigation after officers were seen hitting an Australian journalist with a shield as they cleared the protesters.

For days, the federal government has vowed to have an aggressive response in the District of Columbia after nights of violence that led to fires being set, windows shattered, store shelves emptied and dozens of police officers injured. The federal government has deployed law enforcement officials from numerous agencies, and National Guard troops from a number of states have been sent to the District of Columbia. 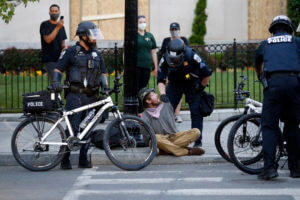 A demonstrator is detained by police during a protest over the death of George Floyd, Monday, June 1, 2020, near the White House in Washington. Floyd died after being restrained by Minneapolis police officers. (AP Photo/Alex Brandon)

The Justice Department had deployed agents from every one of its agencies, including the FBI’s Hostage Rescue Team, an elite tactical unit, and riot teams from the Bureau of Prisons.

The Park Police and Secret Service have had dozens of officers out in riot gear for the last few nights, in addition to the Metropolitan Police Department. U.S. Customs and Border Protection and other Homeland Security agencies were also dispatched.

Members of Congress have raised concerns about a number of federal law enforcement officials in Washington who have refused to identify which agency they work for and stand, armed, without any visible identification or badges. Some lawmakers have vowed to introduce legislation to require federal agents to identify themselves at protests.

“We are concerned about the increased militarization and lack of clarity that may increase chaos,” House Speaker Nancy Pelosi wrote in a letter to Trump on Thursday.

Some of the officers appeared to be assigned to Bureau of Prisons special response teams, which were dispatched to Washington and Miami. Some of those officers have said they were told to say only that they work for the federal government or the Department of Justice.

But Bureau of Prisons Director Michael Carvajal said that was untrue and no such directive had been given.

“I probably should have done a better job of marking them nationally as the agency, the point is well taken, but I can assure you that no one was specifically told, to my knowledge, not to identify themselves,” he said.

Hundreds of other law enforcement officials have also been deployed to the streets of Washington.

They include more than 100 Drug Enforcement Administration agents who have been deployed to work alongside members of the National Guard at checkpoints that have been set up to help slow the numbers of vehicles coming into the area, which investigators suspect may be used to bring in projectiles to be thrown at police. Acting DEA Administrator Timothy Shea said they also serve a vital purpose by helping to relieve the Metropolitan Police Department so it can handle other emergencies.

On Wednesday night, Shea visited a handful of checkpoints throughout downtown Washington.

“They’ve been verbally assaulted at times. Earlier in the week there were bricks thrown at their vehicles, and they responded with restraint and they respected the rights of protesters but were also able to identify criminal activity that was happening,” Shea said of his agents. 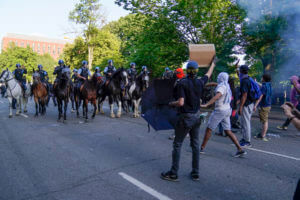 Police on horseback begin to approach demonstrators who had gathered to protest the death of George Floyd, Monday, June 1, 2020, near the White House in Washington. Floyd died after being restrained by Minneapolis police officers. (AP Photo/Evan Vucci)

Most of the protesters have been peaceful and tried to discourage violence. Trump, Barr and others have tried to blame some of the civil unrest on left-wing extremist groups, including antifa, and other “anarchists.” Short for anti-fascists, antifa is an umbrella term for far-left-leaning militant groups that resist neo-Nazis and white supremacists at demonstrations.

A senior Justice Department official said intelligence gathered by the FBI shows that antifa and other groups have been involved in some of the protests around the U.S. There have been “multiple instances” in which people who have been arrested have identified themselves to law enforcement as members of antifa, the official said. The official, who could not discuss ongoing investigations publicly and spoke on condition of anonymity, did not provide specific details about those incidents.

Investigators also believe that groups have been training some demonstrators on techniques to rush officers on the lines of the protests and giving tips on how to avoid being arrested, the official said. 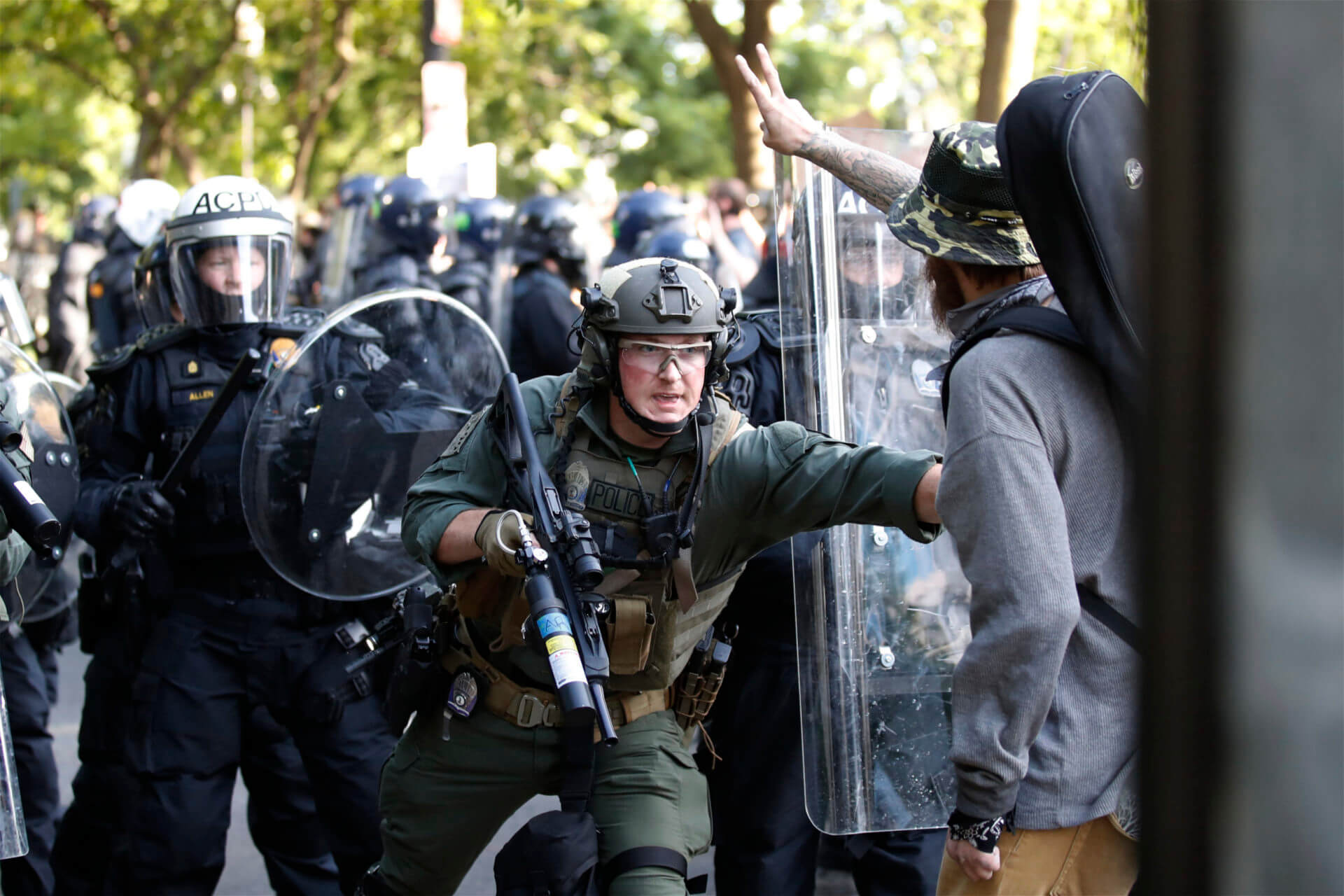 Police begin to clear demonstrators gather as they protest the death of George Floyd, Monday, June 1, 2020, near the White House in Washington. Floyd died after being restrained by Minneapolis police officers. (AP Photo/Alex Brandon)
MORE NEWS