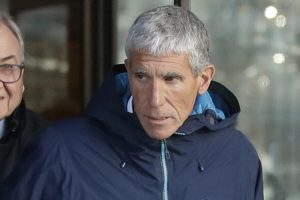 FILE – In this March 12, 2019, file photo, William “Rick” Singer, founder of the Edge College & Career Network, exits federal court in Boston after he pleaded guilty to charges in a nationwide college admissions bribery scandal. In a legal filing on Friday, April 24, 2020, prosecutors said the defense’s claims that investigators bullied Singer, their cooperating witness, into lying in order to entrap actress Lori Loughlin, her husband Mossismo Giannulli and other parents were “repugnant and untrue.” (AP Photo/Steven Senne, File)

Allegations that FBI investigators bullied the witness who helped them build their huge case into lying to trick “Full House” Lori Loughlin, her husband, Mossimo Giannulli, and other parents were “repugnant and untrue,” the prosecutors said in a legal filing Friday.

The witness — admissions consultant Rick Singer — agreed the investigators did not engage in misconduct, according to the FBI.

“Singer noted that the agents didn’t do anything wrong,” according to notes from an FBI interview last week with Singer.

The interview came after the judge overseeing the case ordered prosecutors to explain iPhone notes Singer wrote when he was secretly working with the government in October 2018. Judge Nathaniel Gorton called Singer’s claims in his notes “serious and disturbing.”

Loughlin and Giannulli are set to go to trial in October alongside other parents on charges that they paid $500,000 in bribes to get their two daughters into the University of Southern California as crew recruits, even though neither girl was a rower.

Their lawyers say Singer’s phone notes show investigators fabricated evidence and warrant a dismissal of the case. Loughlin, Giannulli and the other parents say they believed their payments were legitimate donations to the schools or Singer’s charity.

In his phone notes, Singer wrote that investigators told him to lie to get parents to make incriminating statements. The agents instructed him to say he told the parents the payments were bribes, instead of donations, according to the notes made public in legal filings.

Judge Gorton this month asked prosecutors for an explanation, saying that while investigators are “permitted to coach cooperating witnesses during the course of an investigation, they are not permitted to suborn the commission of a crime.”

Prosecutors wrote in their filing that Singer took the notes when he hadn’t yet fully accepted responsibility for his crimes.

“Like many white collar collar criminals,” prosecutors wrote, Singer was not “typically so blunt” and didn’t “use words like ‘bribe’ or ‘payoff,’ even though that is what the payments were.”

“At the time he never considered what he was doing was a bribe and he had several arguments with the agents over the word bribe,” the notes from the FBI interview with Singer said.

The agents in the case also denied pressuring Singer to lie. They said they had been instructing him to be more explicit with new clients who had not already gone through with the bribery scheme.

Singer has pleaded guilty and is expected to be a crucial witness at trials. He began cooperating with investigators in September 2018 and secretly recorded his phone calls with parents to build the case against them.

Nearly two dozen parents have pleaded guilty, including “Desperate Housewives” star Felicity Huffman. She was sentenced to two weeks in prison for paying $15,000 to have someone cheat on her daughter’s entrance exam.