HARTFORD, Conn. (AP) — A lawyer for conspiracy theorist Alex Jones is facing scrutiny from a Connecticut judge, who began hearing testimony Wednesday on whether the lawyer should be disciplined for giving other attorneys for Jones highly sensitive documents, including medical records of relatives of victims of the Sandy Hook Elementary School shooting.

Attorney Norman Pattis is representing Jones in a defamation lawsuit filed by Sandy Hook families against Jones for calling the 2012 shooting in Newtown, Connecticut, a hoax. Twenty first-graders and six educators were killed. 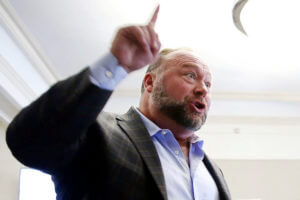 FILE – Alex Jones talks to media during a midday break in his trial at the Travis County Courthouse in Austin, Texas, on July 26, 2022.A Connecticut judge began hearing testimony Wednesday, Aug. 17, 2022, on whether a lawyer for conspiracy theorist Alex Jones should be disciplined for allegedly giving unauthorized people highly sensitive documents, including medical records of relatives of victims of the Sandy Hook Elementary School shooting.
(Briana Sanchez/Austin American-Statesman via AP, Pool, File)

The Connecticut trial is separate from a trial in Texas that ended earlier this month with a jury awarding more than $49 million to the parents of one of the slain children. There’s also a second lawsuit against Jones in Texas by Sandy Hook families over the hoax claims.

Pattis, who did not testify Wednesday, has denied violating Judge Barbara Bellis’ order in the case to not disclose confidential documents to unauthorized people. Pattis said he was “confident in our defense” in a brief response to an email seeking comment Wednesday.

A lawyer for the Sandy Hook families, Christopher Mattei, testified Wednesday that Pattis sent him a text in which Pattis said he may have violated the document disclosure order. After a couple hours of testimony before Bellis in Waterbury, Connecticut, the hearing was continued to next week.

Jury selection before Bellis is set to resume Thursday for a trial on how much in damages Jones should pay the families. Bellis found him liable for damages last November.

According to court documents, Pattis sent a large number of records from the Connecticut defamation case within the past month to the lawyer representing Jones in Texas in the similar lawsuits by Sandy Hook parents over the hoax claims, as well as a bankruptcy case for one of Jones’ companies.

It hasn’t been made clear what documents Pattis allegedly sent. But from what has emerged from court documents, lawyer comments and the Texas lawsuit, they appear to have included confidential medical records of some of the Sandy Hook victims’ relatives as well as texts from Jones’ cell phone.

Jones’ attorneys in Texas mistakenly sent the last two years’ worth of texts from Jones’ cellphone an attorney for a Sandy Hook family. In the recently completed Texas case, Jones had said he didn’t have any texts about Sandy Hook. Legal experts say that episode could open Jones up to a possible perjury charge.