HOUSTON (AP) — Attorneys for a man accused of shooting a 9-year-old girl when he was robbed at an ATM in Houston said Thursday that he was only trying defend himself when he fired at a man who had held him and his wife at gunpoint.

During a court hearing, attorneys for Tony Earls argued that prosecutors had no probable cause to hold him in custody as he didn’t intend to harm Arlene Alvarez, who died after the shooting, and was only protecting himself and his wife.

Earls, 41, has been charged with aggravated assault, serious bodily injury, in the girl’s death. 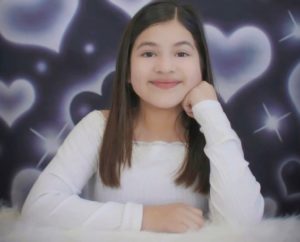 9-year-old Arlene Alvarez was fatally shot in the head when Tony Earls opened fire on a suspect who robbed him at gunpoint at an ATM. (Alvarez Family)

”Our client has the right to defend himself,” Brennen Dunn, one of Earls’ attorneys, said in court. Earls, dressed in orange jail clothing, did not speak during the hearing.

State District Judge Amy Martin ruled there was probable cause to charge Earls and she also denied a request by his attorneys to lower his bond of $100,000. Earls remained in the Harris County Jail on Thursday.

Police allege that after Earls and his wife were robbed in their car at the Chase Bank ATM in southeast Houston at around 9:45 p.m. on Monday, he got out of his vehicle and opened fire at the suspect.

During the court hearing, prosecutor Sepi Zimmer said the robber took $20 from Earls and his wife, along with their car keys, which he later dropped on the ground.

Arlene was sitting in the backseat of her family’s truck when she was shot in the head as her family stumbled upon the robbery. She died the next day in a hospital.

Zimmer alleged that Earls shot at the robber four times and then fired twice at the truck. Police say Earls fired at the truck thinking the robbery suspect had possibly climbed into it.

Zimmer said under Texas law, Earls was not justified in using deadly force because during his actions, he killed an innocent bystander.

“I think it was an unfortunate event that happened to both families but there is one family that lost a child,” Zimmer said.

Dunn said he believes the robber’s actions, including pointing a gun at the head of Earls’ wife, show that Earls “had the right to defend his property and himself.”

After the court hearing, Earls’ attorneys offered their condolences to the Alvarez family.

“It’s an ongoing investigation and we ask that you all continue to pray for both families,” said defense attorney Myrecia Donaldson.

Arlene’s family said during a news conference on Thursday that they don’t believe the shooting was self-defense.

Rick Ramos, an attorney for the Alvarez family, said after the court hearing that Earls’ actions, which he described as “reckless judgment,” require that he be charged with murder. Prosecutors have said they are still reviewing evidence to determine if the charge in the case could be upgraded.

“From the time he was actually robbed to the time he actually got to pull out that pistol, he was no longer defending himself. He was basically trying to kill somebody, which he did, a 9-year-old,” Ramos said.

Ramos said he planned to file a lawsuit on behalf of the Alvarez family against Chase bank, which owns the ATM where the robbery happened.

The ATM location has been the site of previous robberies in recent months, including one in October in which a woman, Mary Jane Gonzalez, was killed over $40.

Ramos is representing Gonzalez’s family in a lawsuit against Chase.

Police were still searching for the robbery suspect. They have not determined if that man returned fire or was shot.

Arlene was the second 9-year-old girl to be shot in Houston since last week. Ashanti Grant remains hospitalized after being shot in the head during a road rage attack Feb. 8. Several children have been shot this year in the Houston area, including an 11-year-old boy who was killed on Feb. 3 as he walked from his apartment to his family’s car to get his coat.

“Our community needs to stop this. We need to start taking care of each other,” Zimmer said of the recent shootings.

While overall crime in Houston dropped by 3.4% in 2021, the nation’s fourth largest city, like other major U.S. cities, has seen an increase in violent crime, particularly homicides.