WASHINGTON (AP) — President Joe Biden signed an executive order Wednesday to improve accountability in policing — a meaningful but limited action on the second anniversary of George Floyd’s death that reflected the challenges in addressing racism, excessive use of force and public safety when Congress is deadlocked on stronger measures. 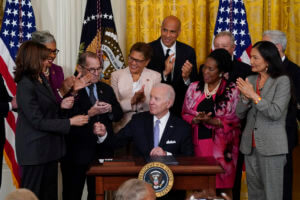 President Joe Biden hands a pen to Vice President Kamala Harris after signing an executive order in the East Room of the White House, Wednesday, May 25, 2022, in Washington. The order comes on the second anniversary of George Floyd’s death, and is focused on policing. (AP Photo/Alex Brandon)

The event shaped by one tragedy occurred a day after a second one, a mass shooting at a Texas elementary school that killed 19 children and two teachers. Biden and Vice President Kamala Harris gave remarks that tried to comfort those affected by the shooting as well those who have suffered from police brutality, promising them that change could come eventually despite the partisan divides on Capitol Hill.

“I know progress can be slow and frustrating,” Biden said. “Today we’re acting. We’re showing that speaking out matters. Being engaged matters. That the work of our time, healing the soul of this nation, is ongoing and unfinished and requires all of us never to give up.”

Floyd’s family was in the audience at the White House as the president declared that “what we do in their memory matters.” With lawmakers unable to reach agreement on how to reform police policies or on efforts to reduce mass shootings, the president has limited avenues for advancing his campaign promises. And as he tries to build consensus, Biden is also attempting to strike a balance between police and civil rights groups at a time when rising concerns about crime are eclipsing calls for reform. 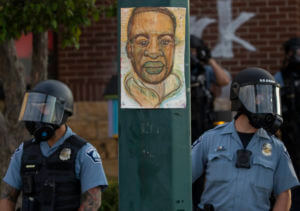 FILE – Minneapolis police stand outside the department’s 3rd Precinct on May 27, 2020, in Minneapolis. President Joe Biden plans to sign an executive order on policing on Wednesday, the second anniversary of George Floyd’s death. That’s according to three people familiar with the matter who spoke on condition of anonymity to preview the matter. The executive order includes changes to policies on use of force and restrictions on the flow of surplus military hardware to local police. (Carlos Gonzalez/Star Tribune via AP, File)

Most of Biden’s order is focused on federal law enforcement agencies — for example, requiring them to review and revise policies on use of force. It will also create a database to help track officer misconduct, according to the White House.

Although the administration cannot require local police departments to participate in the database, which is intended to prevent problem officers from hopping from job to job, officials are looking for ways to use federal funding to encourage their cooperation.

In addition, the order is designed to restrict the flow of surplus military equipment to local police.

Many organizations and lawmakers said the order was an important but incomplete step forward.

“While this action does not have the long-term impact that we had hoped for,” Floyd family lawyer Ben Crump said in a statement, “it does represent incremental progress, and we need to commit ourselves to making progress every day.”

The International Association of Chiefs of Police and the Fraternal Order of Police both engaged with the Biden administration on the order. They said that they “see many components of the order as a blueprint for future congressional action.”

Yet not everyone was satisfied.

“President Biden’s executive order is a poor excuse for the transformation of public safety that he promised the Black voters who put him in office,” the Movement for Black Lives, a civil rights group, said in a statement.

Floyd’s killing by Minneapolis police sparked nationwide protests two years ago. It was the largest series of demonstrations in American history, occurring in the midst of coronavirus lockdowns and President Donald Trump’s divisive reelection campaign.

However, transforming the initial outcry into political change has proven difficult.

When four officers were convicted last year for killing Floyd, Biden urged Congress to pass legislation to reform police by the anniversary of his death.

The guilty verdict was “not enough,” he said, and “we can’t stop here.”

However, no legislation was passed, and bipartisan talks dragged on, and later broke down.

The White House eventually decided to move forward with executive actions rather than wait for Congress.

Sen. Cory Booker, a New Jersey Democrat who helped lead the talks, said the order will enhance transparency, accountability and policing standards. But he noted that additional efforts will be needed for the police to improve relationships with the people they are to protect and serve.

“Across the United States, there is a deficit of trust between law enforcement and the communities they are sworn to protect — particularly Black and Brown communities,” Booker said.

In September, the Justice Department curtailed federal agents’ use of no-knock warrants — which allow law enforcement agents to enter a home without announcing their presence — and updated its policy to prohibit agents from using chokeholds in most circumstances.

But extending such rules to local police is more challenging, and White House officials have spent months in negotiations with civil rights groups and police organizations.

The resulting set of policies is less extensive than originally sought, not to mention delayed by a year.

“We know full well that an executive order cannot address America’s policing crisis the same way Congress has the ability to, but we’ve got to do everything we can,” said a statement from NAACP President Derrick Johnson.

The order goes beyond issues involving misconduct and use of force. It also assesses the impact of facial recognition software on civil liberties, looks for ways to reduce the spread of COVID-19 in federal correctional facilities and suggests better ways to collect data on police practices.

Biden is only the latest president to sign an executive order on police reform. His predecessor, Trump, signed a similar order less than a month after Floyd’s death in 2020 aimed at curbing police brutality. It provided federal dollars to departments that met certain credentialing standards on the use of force. One of the elements of the order called for the establishment of a database tracking terminations, criminal convictions and civil judgments against law enforcement officers for excessive use of force.

Former President Barack Obama also tried to push for police reform through a task force he formed in 2014. One of that task force’s recommendations was an expansion of an already existing database of officers who had been decertified.
___
Associated Press writer Fatima Hussein contributed to this report. 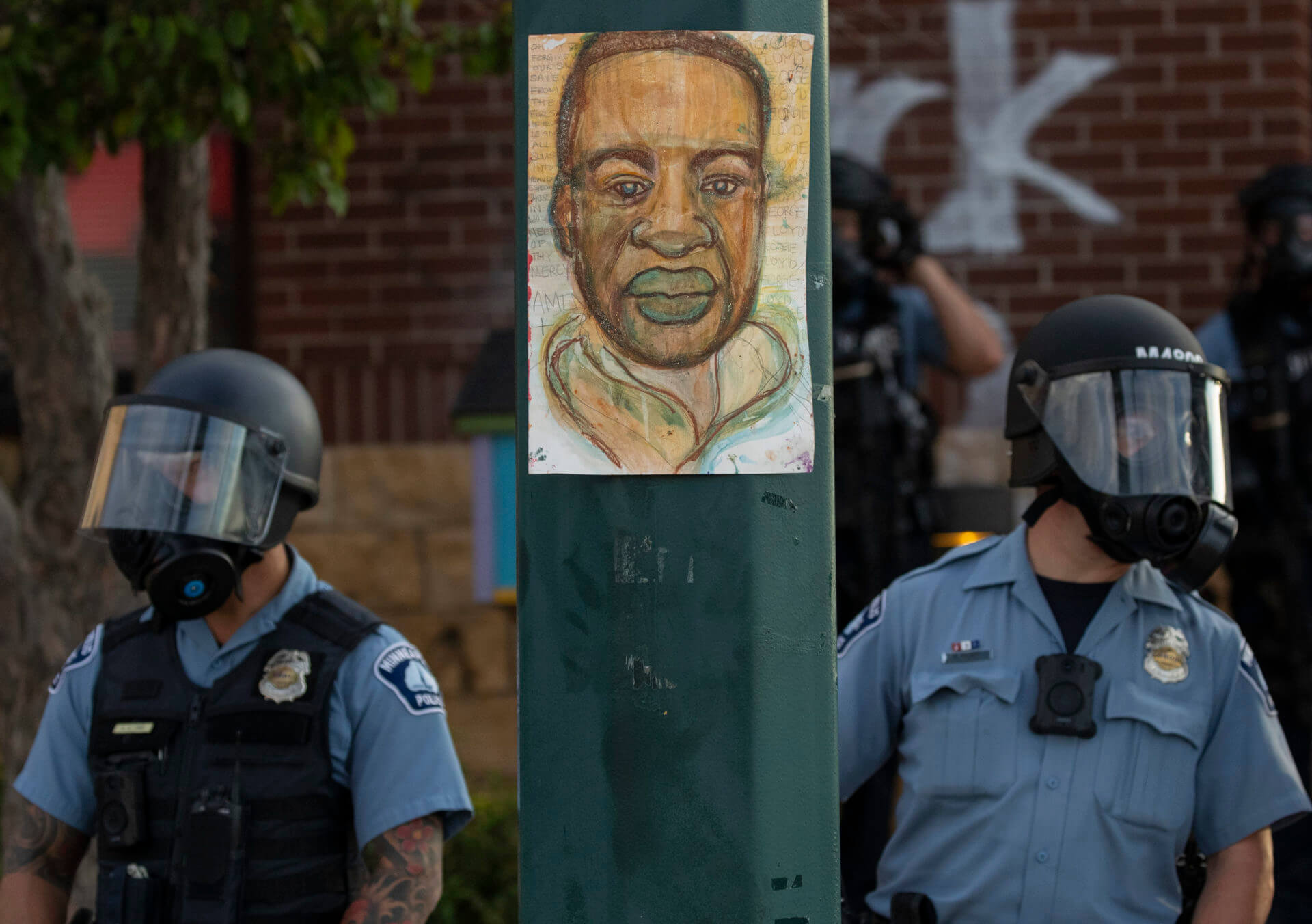 FILE - Minneapolis police stand outside the department's 3rd Precinct on May 27, 2020, in Minneapolis. President Joe Biden plans to sign an executive order on policing on Wednesday, the second anniversary of George Floyd's death. That's according to three people familiar with the matter who spoke on condition of anonymity to preview the matter. The executive order includes changes to policies on use of force and restrictions on the flow of surplus military hardware to local police. (Carlos Gonzalez/Star Tribune via AP, File)
MORE NEWS