DETROIT (AP) — Charges against former Gov. Rick Snyder and others in the Flint water scandal must be dismissed after the Michigan Supreme Court ruled Tuesday that a judge had no power to issue indictments under a century-old, rarely used law.

It’s an astonishing defeat for Attorney General Dana Nessel, who took office in 2019, got rid of a special prosecutor and put together a new team to investigate whether crimes were committed when lead contaminated Flint’s water system in 2014-15. 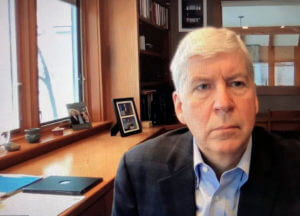 FILE – This screen shot from video, shows former Michigan Gov. Rick Snyder, during his Zoom hearing in the 67th District Court in Flint, Mich., on Jan. 18, 2020. A judge had no authority to issue indictments in the Flint water scandal, the Michigan Supreme Court said Tuesday, June 28, 2022 in an extraordinary decision that wipes out charges against former Gov. Snyder, his health director and seven other people (67th District Court in Flint via AP, file)

“But they do not authorize the judge to issue indictments,” the court said in a 6-0 opinion.

The challenge was filed by lawyers for former health director Nick Lyon. But the decision also applies to Snyder and others who were indicted by Genesee County Judge David Newblatt.

“This wasn’t even a close case — it was six-zip,” said Lyon attorney Chip Chamberlain. “It was based on a plain reading of the statute. They couldn’t do what they tried to do.”

There was no immediate comment from Snyder’s legal team. The attorney general’s office said it was reviewing the opinion.

In a money-saving move, Flint managers appointed by Snyder switched the city’s water source to the Flint River. State regulators said the river water didn’t need to be treated to reduce its corrosive qualities. That was a ruinous decision: Lead from old pipes flowed through the system for 18 months in the majority-Black city.

Snyder was charged with two misdemeanor counts of willful neglect of duty. Lyon and Michigan’s former chief medical executive, Dr. Eden Wells, were charged with involuntary manslaughter for nine deaths related to Legionnaires’ disease when Flint’s water system might have lacked enough chlorine to combat bacteria in the river water.

Nessel assigned Fadwa Hammoud to lead the criminal investigation, along with Wayne County prosecutor Kym Worthy, while the attorney general focused on settling lawsuits against the state.

Hammoud and Worthy turned to a one-judge grand jury in Genesee County — a century-old, rarely used method — to hear evidence in secret and get indictments against Snyder and others.

“There are no velvet ropes in our criminal justice system,” Hammoud proudly declared in 2021 when charges were filed. “Nobody — no matter how powerful or well-connected — is above accountability when they commit a crime.”

But she and her team, acting on Worthy’s recommendation, didn’t follow a traditional process. Hammoud still hasn’t publicly explained why.

Prosecutors in Michigan typically file charges after a police investigation. A one-judge grand jury is extremely rare and is mostly used to protect witnesses, especially in violent crimes, who can testify in secret. 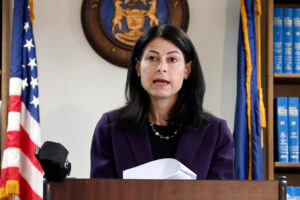 FILE – Michigan Attorney General Dana Nessel speaks during a news conference in Detroit on Oct. 14, 2021. A judge had no authority to issue indictments in the Flint water scandal, the Michigan Supreme Court said Tuesday in an extraordinary decision that wipes out charges against former Gov. Rick Snyder, his health director and seven other people. It’s an astonishing defeat for Attorney General Dana Nessel, who took office in 2019. (Max Ortiz/Detroit News via AP, File)

“It seems that the power of a judge conducting an inquiry to issue an indictment was simply an unchallenged assumption, until now,” the Supreme Court said Tuesday.

The Flint water switch and its consequences have been investigated for crimes since 2016 when then-Attorney General Bill Schuette, a Republican, appointed Todd Flood as special prosecutor. Schuette pledged to put people in prison, but the results were different: Seven people pleaded no contest to misdemeanors that were eventually scrubbed from their records.

Flood insisted he was winning cooperation from key witnesses and moving higher toward bigger names. Nonetheless, Nessel, a Democrat, fired him and pledged to start over following her election as attorney general.

Separately, the state has agreed to pay $600 million as part of a $626 million settlement with Flint residents and property owners who were harmed by lead-tainted water. Most of the money is going to children.

Meanwhile, roughly 10,100 lead or steel water lines had been replaced at Flint homes by last December.