RIPLEY, Miss. (AP) — An airport worker who knew how to take off but not land stole a small airplane Saturday and threatened to crash it into a Walmart, circling for five hours over unnerved Mississippians before ending the flight safely in a soybean field where police arrested him.

Cory Wayne Patterson, 29, was uninjured after the rough landing shortly after posting a goodbye message to his parents and sister on Facebook, authorities said at a news conference. The message said he “never actually wanted to hurt anyone.” 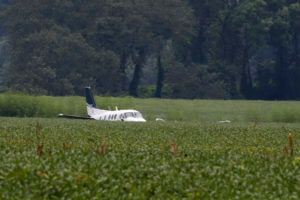 A stolen airplane rests in a field of soybeans after crash-landing near Ripley, Miss., on Saturday, Sept. 3, 2022. Authorities say a man who stole a plane and flew it over Mississippi after threatening to crash it into a Walmart store faces charges of grand larceny and terroristic threats. Tupelo Police Chief John Quaka said Cory Wayne Patterson didn’t have a pilot’s license but had some flight instruction and was an employee of Tupelo Aviation.(AP Photo/Nikki Boertman)

No one was injured.

It was not immediately known why, shortly after 5 a.m., the 10-year Tupelo Aviation employee took off in the fully fueled plane. Fifteen minutes later, Patterson called a Lee County 911 dispatcher to say he planned to crash the plane into a Tupelo Walmart, Quaka said. Officers evacuated people from the Walmart and a nearby convenience store.

“This is more likely a crime of opportunity,” said Quaka, adding that the airport’s tower is not staffed until 6 a.m.

Police negotiators were able to make contact during the flight and convince Patterson to land, but he didn’t know how. He was coached by a private pilot into nearly landing at the Tupelo airport but he aborted the attempt at the last minute and resumed the flight, authorities said.

A negotiator re-established contact around 10 a.m., and learned Patterson had landed in a field and was uninjured, Quaka said. The plane landed near Ripley, Mississippi, about about 85 miles (140 kilometers) southeast of Memphis, Tennessee, and about 45 miles (70 kilometers) northwest of Tupelo.

“There’s damage but believe it or not, the aircraft is intact,” the chief told reporters.

Patterson, whose Facebook page said he is from Shannon, was charged with grand larceny and making terroristic threats. Quaka said federal authorities also could bring charges. Police said Patterson is not believed to be a licensed pilot but has some flight instruction.

Jordan said Patterson contacted family members during the flight. The mayor said he hopes Patterson “will get the help he needs.”

“Sorry everyone. Never wanted to actually hurt anyone. I love my parents and sister this isn’t your fault. Goodbye,” read Patterson’s Facebook message posted at about 9:30 a.m.

Peter Goelz, former managing director at the National Transportation Safety Board, said the vulnerability of small airports, which cater to small planes and corporate jets, has worried security experts for years. 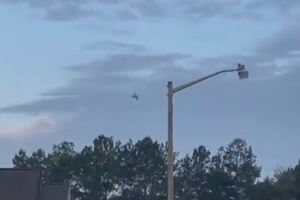 A small airplane circles over Tupelo, Miss., on Saturday, Sept. 3, 2022. Police say the pilot of the small airplane is threatening to crash the aircraft into a Walmart store. The Tupelo Police Department said that the Walmart and a nearby convenience store had been evacuated. (WCBI-TV via AP)

“If you’ve got a trained pilot who can get in and grab a business jet, you’ve got a pretty lethal weapon there,” he said.

She and others got onto four-wheelers to ride over.

“As soon as it crashed, police were there and waiting,” said Ward, who watched from a distance. “Police coaxed him out. They yelled at him, ‘Arms in the air.’” She said the pilot got out of the plane without resisting police.

Michael Canders, director of the Aviation Center at Farmingdale State College in New York, called the incident “a wake-up call” for general aviation airports and their staff.

The Transportation Security Administration requires annual training emphasizing a “see something, say something” approach to try and prevent a scenario like what police believe occurred in Tupelo — an employee with access to aircraft, Canders said.

“This very thing is discussed in the course, the potential for somebody gaining access and intent on damage,” he said. “It’s dependent on all of those who work at an airport. If you see someone you don’t recognize or some unusual activity, you’re supposed to report that.”

Leslie Criss, a magazine editor who lives in Tupelo, woke up early and was watching the situation on TV and social media. Several of her friends were outside watching the plane circle overhead.

“I’ve never seen anything like this in this town,” Criss told AP. “It’s a scary way to wake up on a Saturday morning.”

Goelz said the FAA and Department of Homeland Security would likely examine the incident and issue guidance focused on tightening up security, a potentially costly prospect.

“For an airport like Tupelo, for them to crank up security for Saturday morning at 5 a.m., when their tower doesn’t open until 6 — that’s expensive,’’ Goelz said. “They’re not going to have the funds unless the feds are going to provide it.’’

The airplane drama unfolded as tens of thousands of college football fans were headed to north Mississippi for Saturday football games at the University of Mississippi in Oxford and Mississippi State University in Starkville. Tupelo is between those two cities. 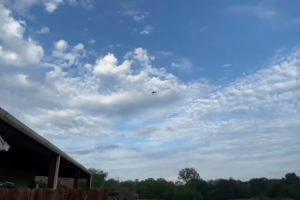 A small airplane circles over Tupelo, Miss., on Saturday, Sept. 3, 2022. Police say the pilot of the small airplane is threatening to crash the aircraft into a Walmart store. The Tupelo Police Department said that the Walmart and a nearby convenience store had been evacuated. (Rachel McWilliams via AP)

Jane and Daniel Alsup stood out in their front yard near where the plane landed and watched it circle low over the pine and oak trees.

“He left for a while, then we heard him come back. Just a few seconds later, we heard a big old ‘flump’ and he landed out in the soybean field,” Jane Alsup said.

Daniel Alsup said the plane landed on the other side of some trees, so they did not see it hit the ground.

“This was the best place it could have happened,” he said of the rural landing site. 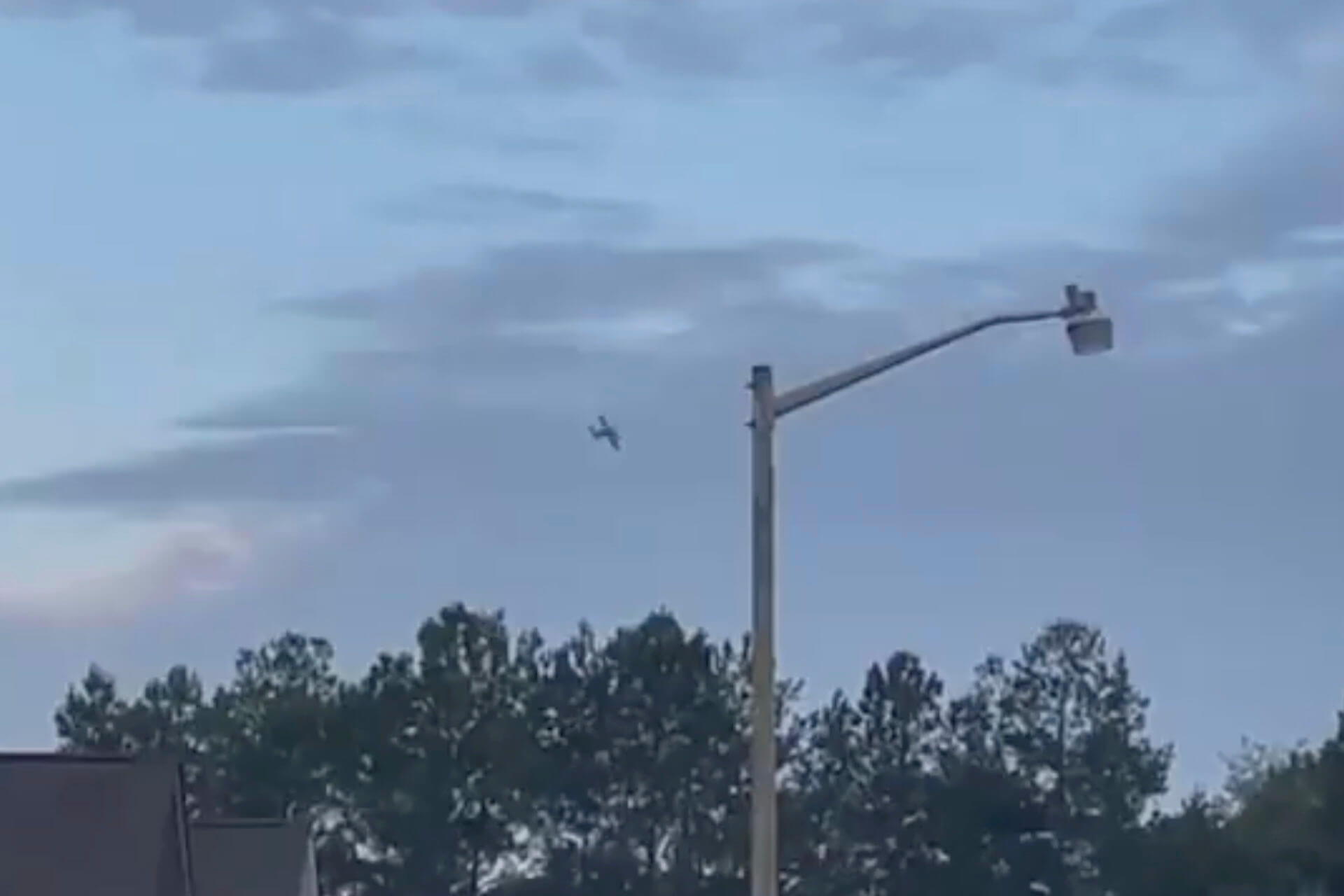 A small airplane circles over Tupelo, Miss., on Saturday, Sept. 3, 2022. Police say the pilot of the small airplane is threatening to crash the aircraft into a Walmart store. The Tupelo Police Department said that the Walmart and a nearby convenience store had been evacuated. (WCBI-TV via AP)
MORE NEWS