TALLAHASSEE, Fla. (AP) — The Florida House of Representatives on Thursday gave final passage to a bill that would dissolve Walt Disney World’s private government, handing Republican Gov. Ron DeSantis a victory in his feud with the entertainment giant over its opposition to a measure that critics have dubbed the “Don’t Say Gay” law.

The move could have huge tax implications for Disney, whose series of theme parks have transformed Orlando into one of the world’s most popular tourist destinations, and serves to further sour the relationship between the Republican-led government and a major political player in the state. Disney did not return an email seeking comment Thursday. 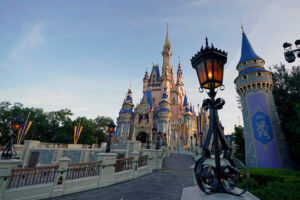 FILE – The newly painted Cinderella Castle at the Magic Kingdom at Walt Disney World is seen with the the crest to celebrate the 50th anniversary of the theme park Monday, Aug. 30, 2021, in Lake Buena Vista, Fla. The idea was presented to Florida lawmakers 55 years ago: Let Disney form its own government and in exchange it would create a futuristic city of tomorrow. That city never materialized, but Walt Disney World became an economic juggernaut, and its government retained unprecedented powers. Five decades later, Gov. Ron DeSantis is asking lawmakers to end Disney’s government in a move that throws a wrench into decades of symbiotic relations between the company and state government.(AP Photo/John Raoux, File)

For DeSantis, the attack on Disney is his latest salvo in a culture war waged over policies involving race, gender and the coronavirus, battles that have made him one of the most popular GOP politicians in the country and a likely 2024 presidential candidate.

The bill passed by the legislature on Thursday would eliminate the Reedy Creek Improvement District, as the 55-year-old Disney government is known, as well as a handful of other similar districts by June 2023. The measure does allow for the districts to be reestablished, leaving an avenue to renegotiate its future. The bill now moves to DeSantis’ office to be signed into law.

The voting ended a bitter, three-day special legislative session in which lawmakers were tasked with passing a new congressional map drawn by DeSantis but also took up the Disney bill at the governor’s request. Tensions erupted Thursday as Democrats staged a sit-in protest on the House floor against the map, prompting Republicans to walk out briefly.

Opponents of the new map chanted phrases about the suppression of Black voters as GOP lawmakers returned and passed both bills
“It was clear that our requests and proposed solutions were not going to be heard so he rushed it through,” Democratic Rep. Fentrice Driskell said of the Disney measure. 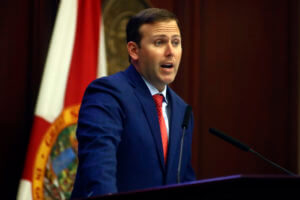 House Speaker Chris Sprowls, R-Palm Harbor, admonishes Rep. Carlos Guillermo Smith, D-Orlando (not pictured) about his line of questioning during debate on House Bill 3-C: Independent Special Districts in the House of Representatives Wednesday, April 20, 2022, at the Capitol in Tallahassee, Fla. The Florida Senate has passed a bill to repeal a law allowing Walt Disney World to operate a private government over its properties in the state. The Florida House of Representatives is expected to take up the bill Thursday.  (AP Photo/Phil Sears)

The dispute with the company began with Disney’s criticism of a new law barring instruction on sexual orientation and gender identity in kindergarten through third grade as well as instruction that is not “age appropriate or developmentally appropriate.”

In March, Disney said it would suspend political donations in the state and added that it would in turn support organizations working to oppose the new law. DeSantis and his fellow Republicans then lashed out at Disney, and have defended the law as reasonable.

“Disney and other woke corporations won’t get away with peddling their unchecked pressure campaigns any longer,” DeSantis wrote in a fundraising pitch Wednesday. “If we want to keep the Democrat machine and their corporate lapdogs accountable, we have to stand together now.” 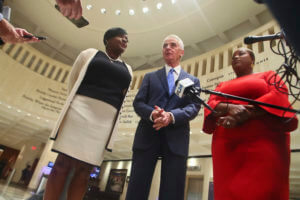 Democrats have criticized the Disney proposal as clear retaliation against the company and warned that local homeowners could get hit with big tax bills if they have to absorb bond debt from Disney — although such details are far from clear.

Disney is one of Florida’s biggest private employers, last year saying it had more than 60,000 workers in the state. It is not immediately clear how the company or local governments around its properties would be affected if the district was dissolved.

The creation of the Reedy Creek Improvement District, and the control it gave Disney over 27,000 acres (11,000 hectares) in Florida, was a crucial element in the company’s plans to build near Orlando in the 1960s. Company officials said they needed autonomy to plan a futuristic city along with the theme park. The city never materialized, however; instead, it morphed into the Epcot theme park.