BOULDER, Colo. (AP) — A judge on Tuesday ordered a state mental health evaluation for the man accused of killing 10 people at a Colorado supermarket in March to determine whether he is competent to stand trial.

Judge Ingrid Seftar Bakke ordered that state doctors conduct the evaluation of Ahmad Al Aliwi Alissa within three weeks at the Boulder County Jail, where Alissa has been detained since the March 22 shooting at a crowded King Soopers supermarket in Boulder. 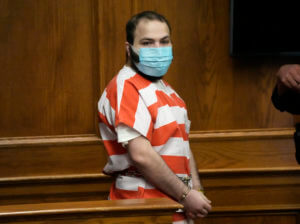 Ahmad Al Aliwi Alissa, accused of killing 10 people at a Colorado supermarket in March, is led into a courtroom for a hearing Tuesday, Sept. 7, 2021, in Boulder, Colo. A judge has ordered a state mental health evaluation for Alissa to determine if he is competent to stand trial. (AP Photo/David Zalubowski/Pool)

Bakke set an Oct. 19 hearing to hear the results of the evaluation, which is meant to determine if Alissa, 22, is competent to stand trial on multiple first-degree murder and other charges.

The defense initially raised unspecified concerns about Alissa’s mental health right after the shooting and said it needed time to evaluate him. They did not raise the issue again in court until Sept. 1, when one of Alissa’s lawyers filed a motion raising concerns about his competency. The filing is sealed as required by state law so the details of the concerns are not known.

However, in a public filing asking to delay a preliminary hearing, Alissa’s lawyers said they have a “reasonable belief” that he suffers from a “mental disability” based on personal interactions with Alissa, information from family members and others, evidence in the case and professional opinion. They also noted that they only got an expert’s determination on Alissa’s mental health on Aug. 31.

Prosecutors were upset that the defense first raised the issue of competency last week, just days before the preliminary hearing, which originally was set for Tuesday. The hearing was scheduled back in May.
A defendant’s ability to understand and assist in their defense is a separate legal issue than a plea of not guilty by reason of insanity, which hinges on whether someone’s mental health prevented them from knowing right from wrong when the crime was committed.

If defendants are unable to understand the proceedings and assist their lawyers, proceedings can be delayed to see if treatment, such as medication, can make them ready for trial.

A mentally ill defendant might eventually plead not guilty by reason of insanity, as James Holmes did in the 2012 shooting at an Aurora movie theater that killed 12 people and wounded 70. It would be up to a jury to decide whether the defendant knew right from wrong at the time of the crime — the state’s legal definition of insanity. Holmes is serving life without parole.

Alissa is accused of killing nine shoppers and workers inside and outside the store and one of the first three police officers who entered the store.

Alissa has also been charged with attempted first-degree murder over allegedly firing at 26 other people, including 11 law enforcement officers. He is also accused of unlawfully possessing 10 high-capacity ammunition magazines, devices banned in Colorado after previous mass shootings.

Investigators have not released a possible motive for the attack.

Several victims’ relatives watched in the courtroom Tuesday as Alissa responded “Yeah,” and “Yes,” as the judge advised him of his rights during the competency process. Alissa wore an orange-and-white striped jail suit and a blue face mask, swiveling slightly in his chair and often looking down during the hearing.