HONOLULU (AP) — A U.S. judge sentenced a former high-ranking Honolulu prosecutor to 13 years in prison Monday and her retired police chief husband to seven years, saying she stole money from her own grandmother and then used his law enforcement power to frame her uncle for a crime he didn’t commit — all to maintain the couple’s lavish lifestyle. 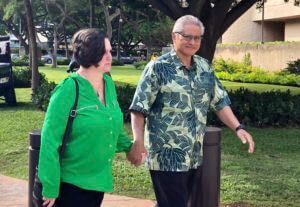 Katherine and Louis Kealoha, now estranged, were once a respected power couple. Louis Kealoha agreed to retire amid a wide-ranging federal investigation. She later gave up her law license.

“This case has staggered the community in many ways,” U.S. District Judge J. Michael Seabright said.

He described how Katherine Kealoha orchestrated a reverse mortgage scheme that forced her grandmother to sell her home, framed her uncle for stealing the Kealohas’ home mailbox, stole money from children whose trusts she controlled as a lawyer, cheated her uncle out of his life savings, convinced her firefighter lover to lie about their affair and used her position as a prosecutor to turn a drug investigation away from her doctor brother.

“Truth can be stranger than fiction,” the judge said at Katherine Kealoha’s sentencing.

Later, he told Louis Kealoha that while his wife was the mastermind, “you did master the frame job that followed,” and the scheme couldn’t have succeeded without the Honolulu Police Department.

A jury convicted the Kealohas last year of conspiracy, along with two former officers who are scheduled to be sentenced Tuesday.

The case is especially shocking, Seabright said, because of the role a police chief of a “major American city,” played.

“Think about that, the chief of police of one of the largest police departments in the country … swears to tell the truth, the whole truth and nothing but the truth,” and lies, the judge said of Louis Kealoha’s false testimony at the trial of his wife’s uncle for stealing the couple’s mailbox. The trial ended in a mistrial that prosecutors say the then-chief caused on purpose to thwart the investigation.

They went to great lengths to maintain a lifestyle they couldn’t afford on public servant salaries, the judge said. 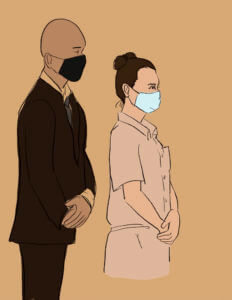 In a letter to the judge, she blamed a prescription drug addiction for clouding her judgment.

“My client was on drugs, her mind was not clear and she did a lot of bad things,” her lawyer, Gary Singh, said in court.

Kealoha apologized to her family in court and asked for forgiveness. “To my uncle, especially,” she said. “I know that he has been through so much pain and so much hurt.”

Kealoha’s aunt, Charlotte Puana Malott, read a letter she said her 100-year-old mother, Florence Puana, wrote before she died in February about her granddaughter’s “ruthless scheme.”

“I was 90 years old in 2009 when I agreed to a reverse mortgage on my home, not really understanding what it meant. It seemed complicated, yet I trusted you, Katherine,” the letter said.

Kealoha came to Puana and her son Gerard Puana with an idea about taking out a reverse mortgage on her grandmother’s home to help buy a condo her uncle wanted. Kealoha said she would consolidate her debts and promised her uncle and grandmother that she would pay off the loan.

She used the money to buy her uncle’s condo, but instead of paying off the loan, she spent the leftover money on luxuries, including $26,000 for an induction banquet when her husband became police chief and $10,000 on Mercedes-Benz and Maserati car payments, the judge said.

“She perverted justice. And she did so for her own personal reasons,” said Michael Wheat, a special federal prosecutor. “To facilitate a lifestyle and a facade and an image in this community.”

Framing her uncle for stealing the Kealohas’ mailbox was to make him less credible in the family financial dispute, the judge said.

He told Katherine Kealoha that she used the police “to do your dirty work.”

Louis Kealoha, 60, filed for divorce after they were convicted. 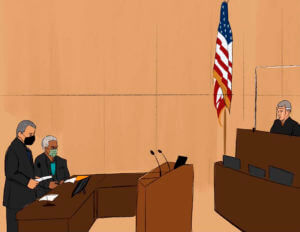 He said at his sentencing that he’s deeply sorry, ashamed and failed to live up to the standards of a police chief. “This is the last place in my life I thought I’d be and I vow never to be here again,” he said.

Partly because of the COVID-19 pandemic, Seabright agreed to allow Kealoha to remain free on bond until he self-surrenders in April. His wife has been in the Honolulu Federal Detention Center since they were convicted.

Monday’s sentencings come after several postponements. Concern about the spread of the coronavirus caused a delay in March, then a Nov. 3 date was changed after officials realized it was Election Day.

“COVID has kept us from this date for quite a while,” the judge said.