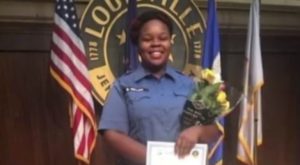 LOUISVILLE, Ky. (AP) — Despite mounting public pressure to file criminal charges nearly five months after Breonna Taylor’s death, prosecutors may face significant obstacles to bringing homicide-related charges against police officers who were shot at when sent to her house with a warrant, legal experts said.

Tensions have swelled in her home town and spread far afield as activists, professional athletes and social media stars push for action while investigators plead for more patience. The warrant also has been called into question and, with federal officials looking into potential civil rights abuses, the case could reach beyond the officers on the scene that night.

Taylor, a 26-year-old Louisville emergency medical tech studying to become a nurse, was shot multiple times March 13 after being roused from sleep by police at her door. The warrant was approved as part of a narcotics investigation into a suspect who lived across town, and no drugs were found at her home.

Attorney General Daniel Cameron, the first African American elected to the job in Kentucky, has declined to put a timetable on his decision since taking over the case in May.

“It’s a tough issue. He has to figure out whether there’s probable cause to believe that there was an unreasonable use of force” by the officers, said Christopher Slobogin, director of the criminal justice program at Vanderbilt University. Slobogin said attorneys for the officers would certainly raise the warrant as a defense in a criminal case. 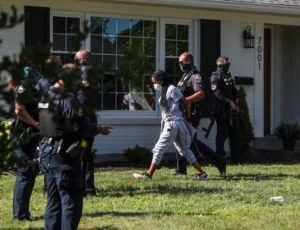 A protester is arrested Wednesday, July 15, 2020 after sitting in the front yard of Kentucky Attorney General Daniel Cameron’s home in Louisville, Kentucky, chanting Breonna Taylor’s name as well as calling for justice for her killing by Louisville Metro Police Department. Cameron said he still has no timeline for when his office will conclude its investigation of the case.About two dozen protestors were arrested. (Mary Ann Gerth/Courier Journal via AP)

Cameron has seen increasing pressure from protesters in recent weeks. Dozens of activists who went to his Louisville home were arrested after they wouldn’t leave his yard, and last week, an armed militia marched into downtown and demanded that Cameron make his decision within a month. Taylor’s family and multiple cultural luminaries — from LeBron James to Oprah Winfrey — have called for three police officers who were at her home to be charged with her killing. Oprah put Taylor on the cover of her O magazine this month.

Taylor’s boyfriend, Kenny Walker, was with her at the apartment and fired a shot at Louisville police Sgt. Jonathan Mattingly after the door was broken down. Mattingly was struck in the leg and returned fire, along with other officers who were outside the apartment.

Taylor, unarmed, was shot several times in her hallway and died on the scene. The officers on the scene were not wearing body cameras and the department has said there is no video of the raid.

The warrant they were carrying has come under scrutiny, and the police lieutenant who sought it, Joshua Jaynes, has been placed on administrative leave during the investigation. Attorneys for Taylor’s family said it was based on erroneous information that a drug dealer was sending packages to Taylor’s apartment.

The FBI is investigating the case for civil rights violations, and agents at its state-of-the-art crime lab in Quantico, Virginia, are examining evidence.

Walker told police investigators he heard knocking but didn’t know who was at the door. Police had secured a controversial no-knock warrant that allows for sudden entry, but Mattingly insisted to investigators they knocked and announced themselves before entering.

Louisville has since banned no-knock warrants in a local ordinance named for Taylor.

Slobogin and other experts noted that it may be challenging for prosecutors to push for charges against police officers who were shot at, prompting them to fire back.

The warrant, “combined with the fact that they were fired upon, would make for a powerful defense argument that they acted in valid self-defense while conducting a lawful police operation,” said Sam Marcosson, a University of Louisville law professor who has closely watched the local case.

Marcosson and Slobogin said if the warrant were proven to be obtained fraudulently, the officers would have had to be aware of that, another difficult legal hurdle. 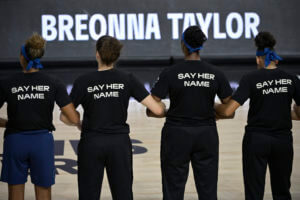 Minnesota Lynx players lock arms during a moment of silence in honor of Breonna Taylor before a WNBA basketball game against the Connecticut Sun, Sunday, July 26, 2020, in Bradenton, Fla. (AP Photo/Phelan M. Ebenhack)

Police department protocol allows the use of lethal force when officers feel threatened, giving some measure of latitude to their judgment at the time.

But the warrant does not necessarily immunize the police, Slobogin said. Even if they had a valid no-knock warrant and properly announced themselves, “blazing away, the way they did, arguably is an excessive use of force.”

One of the officers involved, Brett Hankison, was fired in June. A termination letter said the officer violated procedures by showing “extreme indifference to the value of human life” by “wantonly and blindly” shooting 10 rounds into Taylor’s apartment. It’s not yet clear whose bullets struck Taylor. Mattingly and Myles Cosgrove remain on administrative leave.

Sam Aguiar, an attorney for Taylor’s family who is suing the three officers, said the police shot an innocent person.

“Breonna did not shoot at them and posed no threat,” Aguiar said in an email to AP. “Mattingly clearly says (in his testimony) he sees a female without a firearm and a male with a firearm. He and the others don’t get a license to keep shooting an unarmed female simply because they are confronted by an armed male.”

Aguiar said the officers “created the initial threat” and Hankison should be charged with attempted murder for his recklessness.

Louisville’s top criminal prosecutor, who recused himself from the Taylor investigation, has pointed to the confusion over whether Taylor and Walker knew the police were at the door. Tom Wine dropped an attempted murder charge against Walker in May and has said he believes the police announced themselves at least three times before knocking down the door.

At a news conference in late May, Wine played sections of testimony from Walker and Mattingly, who said he and the other officers were called in that night for extra manpower in a large-scale drug operation.

“It’s possible there was no criminal activity on either side of that door because no one could hear what the other party is saying,” Wine said.

Since Wine made those statements, the city’s police chief has been fired, the FBI’s Louisville office called the case their “top priority” and Taylor’s name has spread to protests against racial injustice around the world. 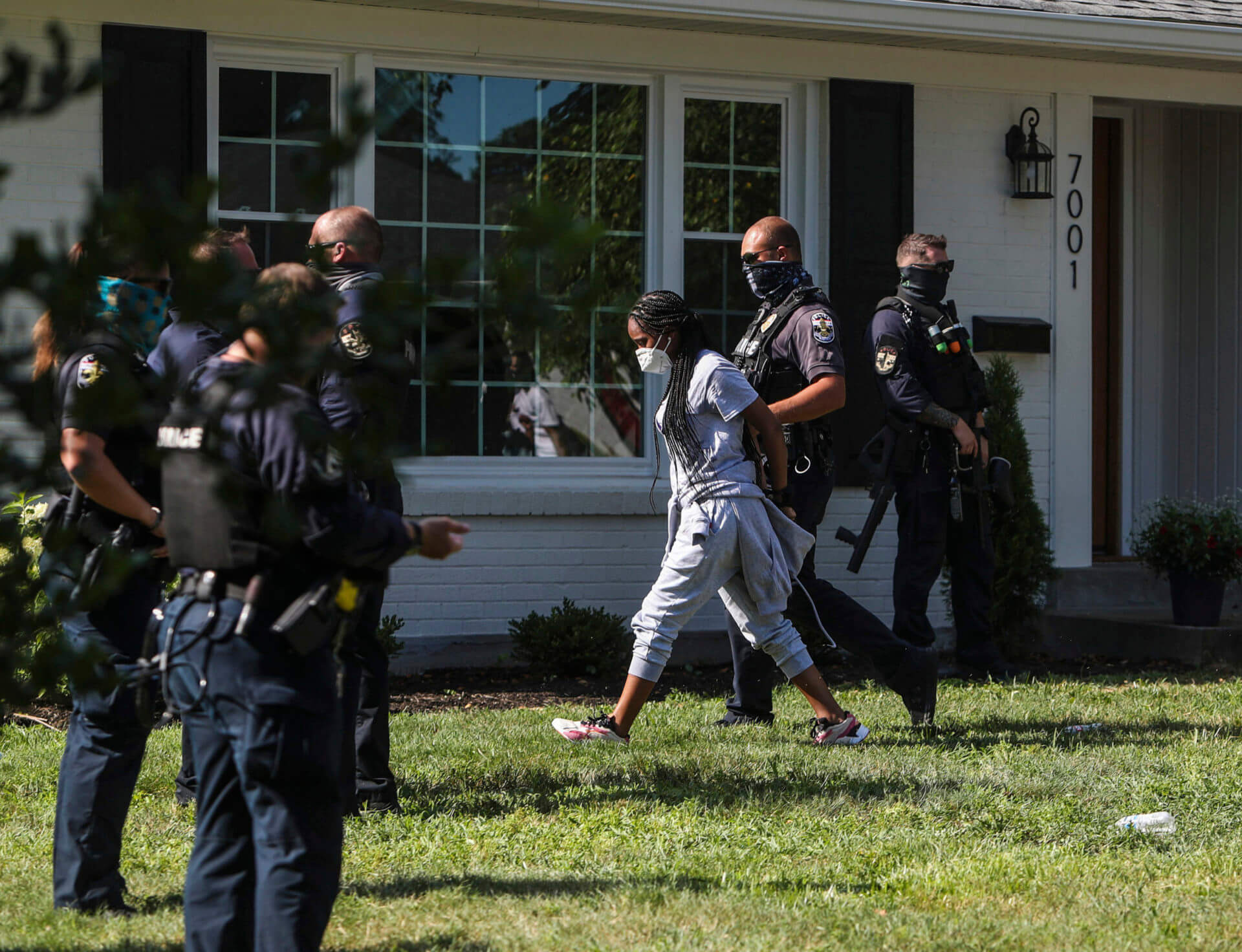 A protester is arrested Wednesday, July 15, 2020 after sitting in the front yard of Kentucky Attorney General Daniel Cameron's home in Louisville, Kentucky, chanting Breonna Taylor's name as well as calling for justice for her killing by Louisville Metro Police Department. Cameron said he still has no timeline for when his office will conclude its investigation of the case.About two dozen protestors were arrested. (Mary Ann Gerth/Courier Journal via AP)
MORE NEWS