MADISON, Wis. (AP) — Prosecutors working to convict Kyle Rittenhouse in the shootings of three people during a protest against police brutality in Wisconsin have introduced as evidence surveillance video taken from an FBI airplane circling thousands of feet above the chaos.

Rittenhouse killed Joseph Rosenbaum and Anthony Huber and wounded Gaige Grosskreutz during the demonstration in Kenosha in August 2020. His trial began Monday. Rittenhouse argues that he fired in self-defense after the men attacked him; prosecutors say he inserted himself into a volatile situation and that video from the plane will show he chased Rosenbaum. 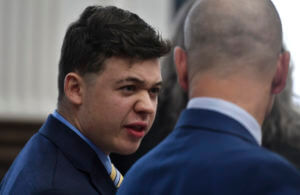 Kyle Rittenhouse talks with his attorney Corey Chirafisi before a break during his trial at the Kenosha County Courthouse in Kenosha, Wis., on Wednesday, Nov. 3 2021. Rittenhouse is accused of killing two people and wounding a third during a protest over police brutality in Kenosha, last year. (Sean Krajacic/The Kenosha News via AP, Pool)

Here’s a look at government efforts to track people’s activities from the air:

HAS THE GOVERNMENT USED PLANES TO MONITOR PAST PROTESTS?

Yes. Aerial surveillance of protests is actually very common. According to an August 2020 Air Force inspector general report, the National Guard used surveillance planes to watch over demonstrations in Washington, D.C., Minnesota, Arizona and California after George Floyd’s death in Minneapolis that May.

The FBI used aircraft to monitor protests in Ferguson, Missouri, following the 2014 police shooting of Michael Brown and in Baltimore to track protests following Freddie Gray’s death in police custody in 2015.

Democrat Barack Obama was president during both of those events. Law enforcement also used aerial surveillance to monitor a white nationalist rally in Charlottesville, Virginia, in 2017 that turned deadly.
Republican Donald Trump was president at that time.

An Associated Press investigation in 2015 found that the FBI had built a fleet of at least 50 surveillance planes that flew more than 100 flights over 11 states during a one-month span in the spring of that year under the Obama administration. The AP traced the planes to at least 13 fake companies designed to obscure the identity of the aircraft and the pilots.

“The result here was particularly aggressive,” she said. “It does seem the response was unusual and unprecedented.”

WHAT KIND OF TECHNOLOGY DO THE PLANES USE?

Pilots can shoot video of the scenes below them using standard cameras, infrared sensors that pick up body heat and light sensors with enough resolution to show building features, basic vehicle features and movements such as people walking or riding bicycles. The planes also can carry technology that mimics cellphone towers, enabling agencies to track people’s cellphones even if they’re not making a call or in public. Much of the technology was developed for use by the U.S. military in Iraq as part of a project dubbed Gorgon Stare after the mythical Greek monster that could turn men to stone with a glance.

Even if the video images are blurry, agencies can still use them in combination with other data to discover people’s identities.

Generally, yes. Aerial surveillance of people in public places is legal and is no different than a video camera mounted on a light pole, said William McGeveren, a University of Minnesota law professor who specializes in data privacy and free speech. Government agencies do not need a warrant to conduct such surveillance, he said.

However, the U.S. Supreme Court ruled in 2018 that extended surveillance of an individual over a large area is illegal. And the 4th U.S. Circuit Court of Appeals ruled in June that the Baltimore Police Department’s six-month trial aerial surveillance program was unconstitutional because the planes’ wide-angle cameras put virtually all city residents under surveillance for 12 hours a day. The ruling came after Black activists sued the city.

Government agencies can impose limitations on their own programs as well. The Air Force report found that the National Guard never got the required authorization from the secretary of defense or the secretary of the Army to launch aerial surveillance of the Floyd protests. A spokesman for the FBI’s Milwaukee field office, which is responsible for Kenosha, didn’t immediately respond to a message seeking comment. The FBI’s national press office also didn’t reply to a email.

IF AERIAL SURVEILLANCE IS LEGAL, WHAT’S THE PROBLEM?

Such surveillance can help police respond in real time to demonstrations that turn violent and identify and arrest bad actors after the fact, protecting public safety.

But civil rights advocates fear that such surveillance leads to government agencies tracking people’s every move, making people afraid to leave their homes or be seen associating with others at political functions and amounting to violations of constitutional freedom of speech and association guarantees. The mere presence of government aircraft can intimidate those on the ground; two military helicopters buzzed protesters at a Floyd protest in Washington last summer, blasting protesters with high-speed wind from their rotors.

And the programs’ very existence can erode trust in the government, especially among Black leaders. One of the Black plaintiffs in the Baltimore case, for example, argued that she routinely visits murder scenes and was afraid that the surveillance program would result in police gathering specific information about her.

WHAT SORT OF IMPACT COULD THE AERIAL VIDEO HAVE ON RITTENHOUSE?

It’s too early to tell. Prosecutors contend that the video will show Rittenhouse chased Rosenbaum before the situation reversed itself and Rosenbaum chased Rittenhouse, chipping away at Rittenhouse’s self-defense claims. Portions of the infrared video prosecutors played in court on Tuesday — shot from 8,500 feet — showed dozens of small, fuzzy and indistinct images of people standing or moving along the streets and sidewalks. No one seemed recognizable by facial features, although investigators could use the video in combination with other information to place certain people there.

The person who shot the video for the FBI was expected to return later in the trial, suggesting the jury will see more of it.
___
Associated Press reporter Michael Tarm in Kenosha and Gary Fields in Washington contributed to this report.