Anti-abortion lawmakers are hopeful the conservative-leaning U.S. Supreme Court, which already indicated in arguments it would uphold Mississippi’s ban on abortion after 15 weeks of pregnancy, might even overturn the nationwide right that has existed for nearly 50 years. A decision isn’t expected before June. 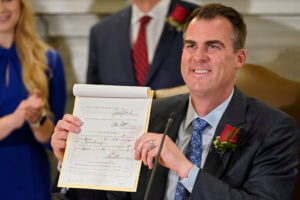 Oklahoma Gov. Kevin Stitt holds up the bill he signed, making it a felony to perform an abortion, punishable by up to 10 years in prison, Tuesday, April 12, 2022, in Oklahoma City. (AP Photo/Sue Ogrocki)

Meanwhile, a new Texas law that bans most abortions and was designed to evade court challenges has been in effect nearly eight months, resulting in a major spike in abortions in Oklahoma as women in Texas head to surrounding states to receive services.

Here’s a look at what’s happening in Oklahoma and what experts say is expected in the coming months:

The first anti-abortion bill signed into law this year by Oklahoma Gov. Kevin Stitt would make performing an abortion a felony crime, punishable by up to 10 years in prison. That bill is scheduled to take effect in August, but it’s likely to be struck down by the courts because the Roe v. Wade decision that legalized abortion “remains the law of the land and a state cannot make a felony something that SCOTUS says is a constitutional right,” said Carl Tobias, a professor at the University of Richmond School of Law.

A lawsuit seeking to halt that measure was filed Thursday in district court, adding the challenge to an existing case in which five anti-abortion measures approved by lawmakers last year have been blocked from taking effect.

Abortion providers in Oklahoma say they are more concerned with two anti-abortion bills in the state that, like the Texas law, allow private citizens to sue doctors or anyone who helps a woman obtain an abortion for up to $10,000. Because that law empowers private parties, not the state, to enforce the ban, so far the U.S. Supreme Court has not determined that it is unconstitutional.

One Texas-style bill that prohibits abortions after about six weeks of pregnancy already is awaiting the governor’s signature; another that bans essentially all abortions is still working through the Legislature.

“We are more concerned at this point about these Texas-style bans because they have, at least recently, been able to continue and remain in effect,” said Emily Wales, interim president and CEO at Planned Parenthood Great Plains, which operates two abortion clinics in Oklahoma.

Even though Oklahoma’s governor has yet to sign the Texas-style ban, abortion rights activists are optimistic it could be halted by the Oklahoma Supreme Court, which has blocked dozens of proposed anti-abortion laws in recent years.

HOW MANY ABORTIONS ARE PERFORMED IN OKLAHOMA?

The number of abortions performed each year in Oklahoma, which now has four abortion clinics, has declined steadily over the last two decades, from more than 6,200 in 2002 to 3,737 in 2020, the fewest in more than 20 years, according to data from the Oklahoma State Department of Health. In 2020, before the Texas law was passed, about 9% of the abortions performed in Oklahoma were women from Texas.

Those numbers are expected to spike dramatically because of the influx of Texas residents seeking abortions in Oklahoma. Before the Texas ban took effect on Sept. 1, about 40 women from Texas had abortions performed in Oklahoma each month, the data shows. That number jumped to 222 Texas women in September and 243 in October.

“We’re serving as many Texans as Oklahomans right now, in some cases more Texans than Oklahomans,” Wales said.

WHAT’S HAPPENING ON THE GROUND IN OKLAHOMA?

Even though abortions are still legal in Oklahoma, Wales said many patients are uncertain because they’ve seen news stories about efforts to outlaw the practice. She said operators of the two clinics are slowing down scheduling appointments over concerns that there could be delays because of the new laws.

“At this point we are being really cautious about opening new schedules, because we don’t want patients to make travel arrangements, schedule time off work, get to Oklahoma and then find out the governor signed a bill and you can no longer access care here,” she said.

It’s not clear how soon the courts in Oklahoma might act, although judges in the past have issued temporary injunctions within weeks of legal challenges being filed.

Meanwhile, Republican lawmakers in Oklahoma who have sought to restrict or outlaw abortion for decades are buoyed by the possibility that the U.S. Supreme Court may allow states to regulate or ban the practice.

“Combined with other Oklahoma statutes now on the books, it is hoped the practice of abortion will cease in our state for all time,” said Rep. Todd Russ, a Republican from Cordell who wrote Oklahoma’s Texas-style bill. “We will continue our work until that is accomplished.”

Oklahoma is one of 22 states that have laws in place that would immediately ban abortions if the high court were to overturn or fundamentally weaken its Roe v. Wade decision, according to the Guttmacher Institute in New York, a think tank that supports abortion rights.