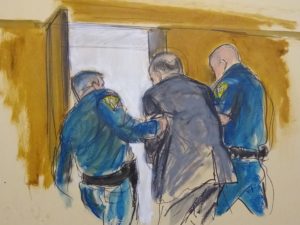 In this courtroom sketch, Harvey Weinstein, center, is led out of Manhattan Supreme Court by court officers after a jury convicted him of rape and sexual assault, Monday, Feb. 24, 2020 in New York. The jury found him not guilty of the most serious charge, predatory sexual assault, which could have resulted in a life sentence in New York. (Elizabeth Williams via AP)

Weinstein, who is serving a 23-year prison sentence on convictions for rape and sexual assault against two women, made a brief appearance Friday in a Buffalo courtroom via video conference from prison. The extradition hearing was postponed to Dec. 11.

The Los Angeles County District Attorney’s Office agreed to the delay because of the pandemic, a spokesman said. Weinstein, 68, survived a bout with the coronavirus earlier this year while serving time in a maximum-security prison near Buffalo.

He is facing similar sexual assault charges in Los Angeles, as well as lawsuits by multiple women who accuse him of sexual abuse. He has denied all the allegations against him.

Weinstein is imprisoned at the maximum-security Wende Correctional Facility east of Buffalo.