The nation’s top aviation regulator is suggesting that local police around the country should file charges more often against unruly airline passengers and that airports should clamp down on alcohol sales.

Federal Aviation Administration chief Stephen Dickson said that every week, police are asked to be there when a flight lands after an incident involving passengers, including cases in which they assault flight attendants. 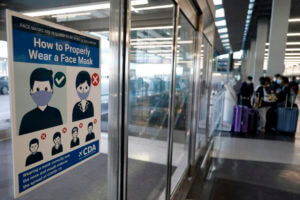 “Nevertheless, many of these passengers were interviewed by local police and released without criminal charges of any kind,” Dickson said in letters to airport officials. “When this occurs, we miss a key opportunity to hold unruly passengers accountable for their unacceptable and dangerous behavior.”

Dickson noted in the letters dated Wednesday that the FAA has proposed civil fines against dozens of passengers in recent months, but the agency has no authority to file criminal charges.

Dickson also asked airports to work with concessionaires to limit alcohol-related incidents. He said some concessionaires sell alcohol to go and passengers get drunk before the flight or believe they can carry their drinks on to the plane.

The letter went to more than 500 airports and two airport trade groups.

This week, the FAA said airlines have reported 3,715 incidents involving unruly passengers since Jan. 1, with about three-fourths of the events involving people who refuse to wear face masks, as the federal government requires on airline flights. The FAA said it started investigating more than 600 incidents — nearly double the numbers for 2019 and 2020 combined — and has proposed fines in 99 of them.

The Association of Flight Attendants has pushed for more criminal prosecutions. The union said last week that nearly one in five members who responded to a survey reported witnessing or being involved in physical incidents involving passengers this year.

The surge in incidents of bad behavior on planes has been attributed to many factors including opposition to the mask rule, stress brought on by the coronavirus pandemic, and the easy availability of alcohol in airports. Planes have been packed this summer with vacation travelers, and flight delays and cancellations have soared for reasons including thunderstorms, staffing shortages and technology outages.

Longtime flight attendants can’t recall a similar level of tension. They say it is worse than an increase in unruly passengers in the 1990s that led Congress to make it a crime to interfere with airline crews. Some have reported being harassed, followed through terminals, and assaulted.

Reports of arrests have been rare, although they were made in two of the more notable recent incidents.

A 22-year-old Ohio man was arrested last week in Miami after allegedly groping two female flight attendants and punching their male colleague on a Frontier Airlines flight. He spent the end of the flight duct-taped to a seat. In late May, a 28-year-old California woman was charged with felony battery after allegedly slugging a Southwest flight attendant in the face. The attendant lost two teeth, according to her union president.