ALEXANDRIA, Va. (AP) — The family of a Kansas woman charged with joining the Islamic State group and leading an all-female battalion says they want nothing to do with her, a prosecutor said Monday.

Allison Ekren, 42, made an initial appearance on Monday afternoon in U.S. District Court in Alexandria. The hearing lasted only minutes; she was ordered to remain in jail pending a detention hearing set for Thursday afternoon, and an attorney was appointed to represent her. 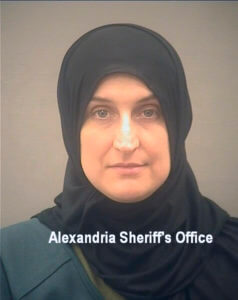 This undated photo provided by the Alexandria, Va., Sheriff’s Office in January 2022 shows Allison Fluke-Ekren. Fluke-Ekren, 42, who once lived in Kansas, has been arrested after federal prosecutors charged her with joining the Islamic State group and leading an all-female battalion of AK-47 wielding militants. The U.S. Attorney in Alexandria announced Saturday, Jan. 29, 2022, that she has been charged with providing material support to a terrorist organization. (Alexandria Sheriff’s Office via AP)

At the end of the hearing, though, First Assistant U.S. Attorney Raj Parekh told the judge that he had been in contact with Ekren’s parents and her adult children, and all had said they wanted no contact with her.

The magistrate judge, Ivan Davis, said he had little ability to keep her from reaching out to her family from jail, but told Ekren he would take it into account at Thursday’s hearing if she contacted her family against their wishes.

Ekren, speaking in a soft-spoken voice and wearing an inmate jumpsuit and headscarf, said she understood the restriction. She also told the judge, in response to his question, that she preferred to be addressed as Ekren. The Justice Department used her full name, Allison Fluke-Ekren, when it announced charges against her Saturday.

Prosecutors say Ekren wanted to recruit operatives to attack a college campus in the U.S. and discussed the idea of attacking a shopping mall. She told one witness that “she considered any attack that did not kill a large number of individuals to be a waste of resources,” according to an FBI affidavit.

The affidavit also alleges Ekren became leader of an Islamic State unit called “Khatiba Nusaybah” in the Syrian city of Raqqa in late 2016. The all-female unit was trained in the use of AK-47 rifles, grenades and suicide belts.

According to court papers, Ekren moved to Egypt in 2008 and traveled frequently between Egypt and the U.S. over the next three years. She has not been in the U.S. since 2011. Prosecutors believe she moved to Syria around 2012.