DeSantis, a Republican, has signaled his support for the proposal, which was approved in the GOP-controlled statehouse Thursday night after emotional debate that often veered into painful, personal stories. The governor’s office did not immediately return an email seeking comment. 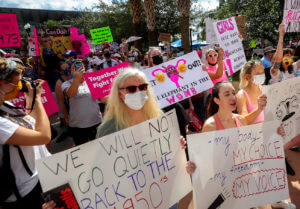 FILE – Participants wave signs as they walk back to Orlando City Hall during the March for Abortion Access on Saturday, Oct. 2, 2021, in Orlando, Fla. Abortions after 15 weeks would be banned in Florida under a proposal Republican senators have given final passage and sent to Gov. Ron DeSantis for his expected signature. The GOP-controlled Senate passed the bill late Thursday, March 3, 2022. (Chasity Maynard/Orlando Sentinel via AP)

President Joe Biden, a Democrat, responded in a tweet Friday: “Last night, the Republican-controlled Florida legislature passed a dangerous bill that will severely restrict women’s access to reproductive health care. My administration will not stand for the continued erosion of women’s constitutional rights.”

Republicans across the country are moving to replicate a 15-week abortion ban in Mississippi that the Supreme Court seems poised to uphold, potentially weakening or overturning Roe v. Wade, in a case expected to be decided this summer. If so, Florida’s legislation could weaken the state’s place as as a destination for women throughout the South whose states have more restrictive abortion laws.

“Access to care in the South is being decimated,” said Laura Goodhue, executive director of the Florida Alliance of Planned Parenthood Affiliates, adding that the passage of the bill signals that “your right to bodily autonomy depends on where you live.”

The state currently allows abortions up to 24 weeks of pregnancy, with no exceptions thereafter for victims of rape or incest, according to the Guttmacher Institute.

The Florida bill contains exceptions if the abortion is necessary to save a mother’s life or prevent serious injury to the mother, or if the fetus has a fatal abnormality confirmed by two doctors. It would go into effect July 1, 2022.

Republicans rejected several attempts by Democrats to add exceptions for rape, incest or human trafficking. Supporters said it’s not a total ban and still gives women enough time to consider whether to get an abortion. They also called it reasonably limited, saying state statistics show only 6% of Florida’s abortions last year occurred after the first trimester, or after the 11th week. Of these, 17 women and girls had been impregnated through rape or incest.

“The only thing that we’re asking in this bill is that whatever decision you make, you do it before the 15 weeks,” said Republican Sen. Ileana Garcia.

Some lawmakers revealed their own abortions and experiences with sexual assault as the measure moved through the GOP-controlled statehouse.

Sen. Lauren Book, a Democrat who turned the pain of being sexually abused by her nanny into a career of helping other survivors, tearfully revealed she was also drugged and raped by multiple men when she was a young teenager. She implored senators to allow exemptions for rape, incest or human trafficking.

“It’s not OK to force someone who’s been sexually assaulted and impregnated to carry that pregnancy to term if they don’t want too, it’s just not,” Book said. “And if a woman or a girl needs more than 15 weeks to decide, we should be able to give that to her.”

When the bill passed the GOP-controlled House last month, Republican Rep. Dana Trabulsy told lawmakers she previously had an abortion but has “regretted it everyday since.”

“This is the right to life and to give up life is unconscionable to me,” she said.

GOP lawmakers in West Virginia and Arizona have introduced 15-week abortion bans similar to the Mississippi law. Republicans in other states have modeled legislation after a Texas law, which the Supreme Court allowed to stand pending appeals, that effectively bans abortions after six weeks.

White House officials hosted a roundtable discussion with abortion rights advocates and Democratic state lawmakers on Thursday about the Florida bill as well as Republican restrictions in other states, expressing a commitment to “exploring every option to protect reproductive health care.”