SOUTHFIELD, Mich. (AP) — A University of Michigan wrestler from the 1970s said Thursday that he was kicked off the team and lost his financial aid after complaining he had been physically abused by a sports doctor.

Tad Deluca appeared at a news conference as the whistleblower whose 2018 complaint about Dr. Robert E. Anderson, now deceased, led to a police investigation.

He turned to the university two years ago, writing to the athletic director about what happened decades earlier at the hands of Anderson. Deluca said he was inspired by a news report about the outspoken victims of former Michigan State University sports doctor Larry Nassar.

“Once again, the University of Michigan ignored me. I will not be ignored again,” said Deluca, a retired teacher in northern Michigan. “Everybody who was abused by this doctor — the doctor everyone knew was doing this, abusing athletes and students — should speak up. It has to stop.” 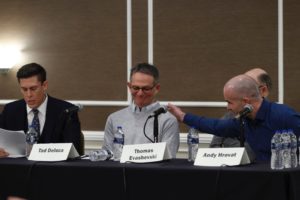 Officials have acknowledged some university employees were aware of accusations against Anderson prior to Deluca’s 2018 complaint.

Last week, the university’s president apologized to “anyone who was harmed” by Anderson and offered counseling services. The school said it launched an investigation into the doctor’s behavior following abuse allegations from five people.

Deluca said he complained to his coach, Bill Johannesen, in 1975. He said Anderson touched his genitals while seeing him for injuries.

“You can’t call him a coach,” Deluca said, when asked about his views of Johannesen. “A coach is a term of endearment.”

Deluca lost his spot on the wrestling team, and Johannesen read Deluca’s letter about Anderson to his teammates in an effort to humiliate him, Stinar said.

Johannesen has denied being told by any wrestlers that Anderson touched them inappropriately.