To date, 13 states have passed so-called trigger laws that were designed to outlaw most abortions if the high court threw out the constitutional right to end a pregnancy. The majority of those states began enforcing their bans soon after the June 24 decision, but Idaho, Tennessee and Texas had to wait 30 days beyond when the justices formally entered the judgment, which happened several weeks after the ruling was announced. 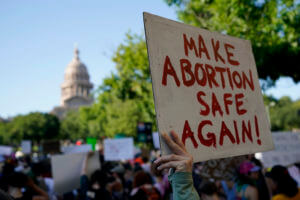 FILE – Demonstrators march and gather near the state capitol following the Supreme Court’s decision to overturn Roe v. Wade, Friday, June 24, 2022, in Austin, Texas. In Texas, the country’s second largest state has banned most abortions after about six weeks of pregnancy since September. While clinics were severely limited in what services they could provide during that time, they officially stopped offering abortions on June 24 after the attorney general argued that state laws banning abortion put into place before Roe v. Wade was established in 1973 could now be enforced ahead of the implementation of the trigger law. (AP Photo/Eric Gay, File)

That deadline is up Thursday. North Dakota’s trigger law is scheduled to take effect Friday.

The change will not be dramatic. All of these states except North Dakota already had anti-abortion laws in place that largely blocked patients from accessing the procedure. And the majority of the clinics that provided abortions in those areas have either stopped offering those services or moved to other states where abortion remains legal.

Texas, the country’s second-largest state, has banned most abortions once fetal cardiac activity has been detected, which can be as early as six weeks into pregnancy, before many women know they’re pregnant. The ban has been in place for almost a year, since courts refused to stop the law last September.

While clinics were severely limited in the services they could provide during that time, they officially stopped offering abortions on the day of the Supreme Court ruling. Republican Attorney General Ken Paxton argued that state laws that banned abortion before Roe v. Wade could be enforced ahead of the implementation of the trigger law.

Much like Texas’ current abortion ban, the trigger law does not include exceptions for rape or incest. Instead it has a loophole if a woman’s life or health is in danger.

The political response to the change was swift: Democrat Beto O’Rourke chose Thursday to unveil the first TV ads in his campaign against Republican Gov. Greg Abbott, who signed off on the statute.

One of the ads includes a voice-over saying some women will die because of the law. 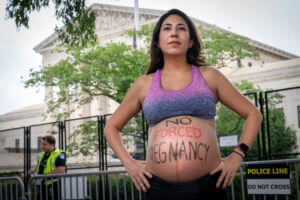 FILE – Julia Bradley-Cook, of Washington, who is 7 months pregnant, poses for a portrait as she protests for abortion rights, Saturday, May 14, 2022, outside the Supreme Court in Washington. A handful of Republican-led states will soon implement near-total bans on abortion, marking yet another slate of laws severely limiting the procedure to be allowed to go into effect after the U.S. Supreme Court’s overturned Roe v. Wade on June 24, 2022. (AP Photo/Jacquelyn Martin, File)

“From this day forward,” the ad begins, “women all across Texas are no longer free to make decisions about our own body.”

Meanwhile, Texas has challenged a legal interpretation put forth by the federal government that was aimed at requiring Texas hospitals to provide abortion services if the life of the mother is at risk. On Wednesday, a federal judge temporarily blocked the government from enforcing that interpretation.

Texas argued that the federal guidance would have required hospitals to provide abortions before the mother’s life is clearly at risk, which would have violated the state’s trigger law.

A similar situation played out in Idaho, but there a federal judge ruled Wednesday that the state’s abortion ban violated federal law.

U.S. District Judge B. Lynn Winmill said the state could not enforce its abortion ban in cases where pregnant patients were experiencing a medical emergency that seriously threatened their lives or health. Idaho’s abortion ban makes all abortions felonies, but allows physicians to defend themselves in court by arguing that the procedure was necessary to save the life of the mother or done in cases of rape or incest.

Over in Tennessee, just two of the six clinics that provide abortions continued to offer the service after Roe was overturned. They did so even as Tennessee enacted a “heartbeat law” similar to the one passed in Texas. Under both the new trigger law and the previous heartbeat law, doctors who violate the law risk felony convictions and up to 15 years in prison. 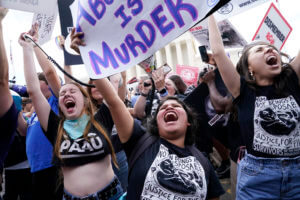 FILE – People celebrate following the Supreme Court’s decision to overturn Roe v. Wade in Washington, Friday, June 24, 2022. A handful of Republican-led states will soon implement near-total bans on abortion, marking yet another slate of laws severely limiting the procedure to be allowed to go into effect since the June 24 decision. (AP Photo/Jacquelyn Martin, File)

Operating after the high court’s abortion ruling has been at times a “painful” experience, said Melissa Grant, chief operations officer of carafem, which has had a Nashville clinic since 2019. The legal environment has required difficult conversations between staffers and patients who may be unaware how early in pregnancy cardiac activity can be detected.

Because Tennessee requires patients to wait 48 hours before getting an abortion, Grant says her staff has seen some patients qualify for the procedure during an initial visit only to be turned away two days later because an ultrasound picked up fetal cardiac activity.

“When we find that we do ultimately have to turn somebody away, whether it’s the first visit, the second visit, the conversations can be very emotional. Primarily anger, fear, grief, sometimes disbelief, and it’s difficult for the staff,” she said.

The situation is similar in Memphis, where abortion providers at the region’s lone operating clinic say they turned away nearly 100 patients who did not qualify for an abortion during their second visit, said Jennifer Pepper, chief executive officer of CHOICES: Memphis Center for Reproductive Health.

That stress compounded in the days leading up to the trigger law deadline. As the last appointments took place, the staff had to weigh each patient’s situation against the likelihood that they will qualify under Tennessee’s already sharp restrictions and their ability to travel out of state.

CHOICES was the first abortion clinic to open in Memphis in 1974, and on Thursday it will become the last. The clinic is bracing for the change by increasing its midwife resources, expanding the birth center and offering gender-affirming care. It is also opening a second location in Carbondale, Illinois, a three-hour drive to the north.

The staff planned to gather Friday to “celebrate how we’ve served thousands of our patients. We’re starting a new chapter, but it is not our last chapter,” Pepper said.

In Idaho, the federal government argued that Medicaid-funded hospitals must provide “stabilizing treatment” to patients experiencing medical emergencies despite its trigger law.

Much of Idaho’s law went into effect Thursday, but due to the federal judge’s ruling Wednesday, the state cannot prosecute anyone who is performing an abortion in a medical emergency.

Most abortions in Idaho were effectively banned on Aug. 12, when the Idaho Supreme Court allowed a different law to go into effect allowing potential relatives of an embryo or fetus to sue abortion providers.

North Dakota is also waiting to see if its trigger law will be implemented. Lawyers for the state’s only abortion clinic, which recently moved a few miles to Minnesota, have asked for a delay as they pursue a lawsuit challenging the ban. A judge has promised to make a decision on the request by the end of this week. 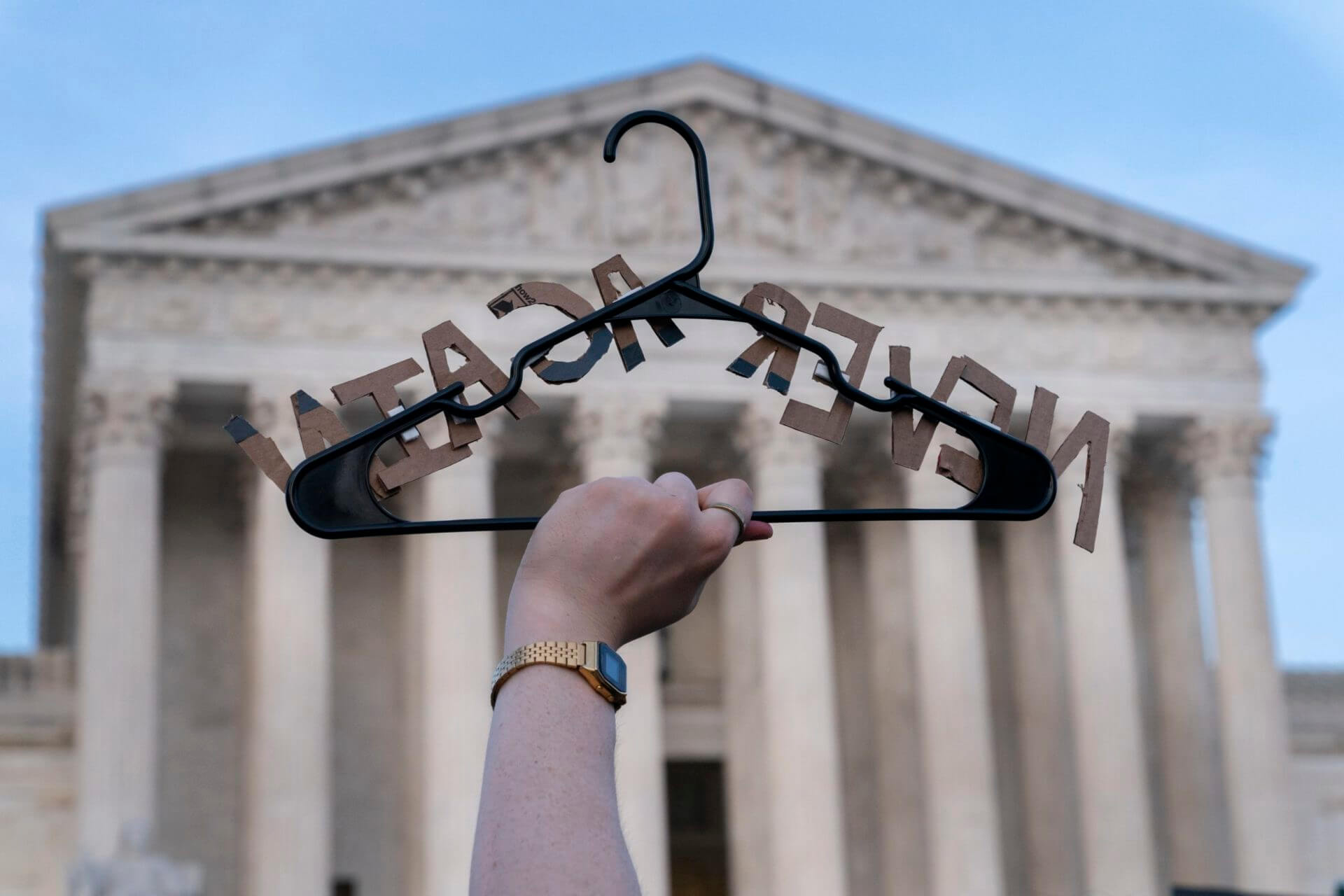 FILE - Isaac Parham, left, holds up a coat hanger with "never again" spelled out on it, as demonstrators protest about abortion outside of the U.S. Supreme Court Tuesday, May 3, 2022, in Washington. A handful of Republican-led states will soon implement near-total bans on abortion, marking yet another slate of laws severely limiting the procedure to be allowed to go into effect after the U.S. Supreme Court's overturned Roe v. Wade on June 24, 2022. (AP Photo/Jacquelyn Martin, File)
MORE NEWS