WASHINGTON (AP) — Justice Neil Gorsuch appeared Monday to be a pivotal vote for the proposition that a large chunk of eastern Oklahoma remains an American Indian reservation, a question the Supreme Court failed to resolve a year ago. 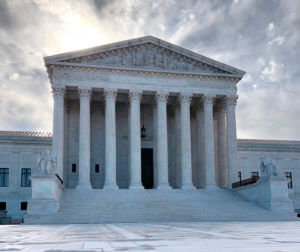 The rising sun shines over the Supreme Court building on Capitol Hill in Washington, Monday morning, May 11, 2020. (AP Photos/Mark Sherman)

The justices heard arguments by phone in an appeal by a Native American man who claims state courts have no authority to try him for a crime committed on reservation land that belongs to the Muscogee (Creek) Nation.

The reservation once encompassed 3 million acres (12,100 square kilometers), including most of Tulsa, the state’s second-largest city. In a separate case, a federal appeals court threw out a state murder conviction because the crime occurred on land assigned to the tribe before Oklahoma became a state and Congress never clearly eliminated the Creek Nation reservation it created in 1866.

Gorsuch didn’t participate in the earlier case because he took part in it when he served on the appeals court in Denver before becoming a justice in 2017. The other eight justices were apparently evenly divided, and they took up a different case so the full complement of nine justices could rule.

Monday’s case involved 71-year-old Jimcy McGirt, who is serving a 500-year prison sentence for molesting a child. Oklahoma state courts rejected his argument that his case does not belong in Oklahoma courts and that federal prosecutors should instead handle his case.

Several justices voiced concerns that a ruling for the tribe could have big consequences for criminal cases, but also tax and other regulatory issues.

But Gorsuch suggested that what he called a “parade of horribles” has not materialized since the federal court ruling in the murder case.

If he wins at the Supreme Court, McGirt could potentially be retried in federal court.