SAN DIEGO (AP) — Prosecutors began presenting evidence Thursday to a judge who will decide whether a man should face trial on charges of opening fire in a Southern California synagogue on the last day of Passover, killing a woman and injuring three other people. 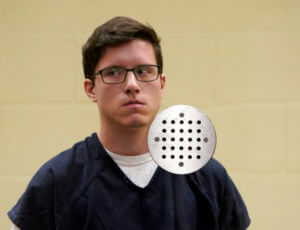 John T. Earnest, 20, entered court in blue jail garb and sat next to his public defender, showing no facial expressions as he looked at the first witness.

Dr. Steven Campman, the San Diego County chief deputy medical examiner, testified about the autopsy of Lori Gilbert-Kaye, 60, who was struck and killed by two shots from a rifle.

The preliminary hearing is expected to last up to two days. Among evidence, prosecutors have a recording of Earnest’s call to an emergency dispatcher and his online posts.

Earnest has pleaded not guilty to murder, attempted murder and an unrelated arson charge at a mosque. The murder charge, classified as a hate crime, would make him eligible for the death penalty if convicted, but prosecutors have not said what punishment they will seek. 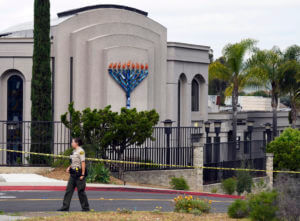 The San Diego college student called 911 as he sped away from the Chabad of Poway synagogue on April 27, saying, “I just shot up a synagogue,” according to an affidavit filed in a separate case against him in federal court. He told the dispatcher he thought he killed some people and that he did it “because Jewish people are destroying the white race.”

Earnest told the dispatcher where he was, that he would surrender to authorities and leave his semi-automatic rifle in the car. Police arrested him without a struggle.

Earnest had tried weeks earlier to burn down a mosque in Escondido, where seven people on a spiritual retreat were sleeping, according to the affidavit. They awoke to flames and managed to extinguish the fire.

Outside the mosque, the suspect had allegedly scrawled the name of the man accused of carrying out shootings at two mosques in New Zealand that killed 51 people earlier this year.

In online postings, Earnest said he was inspired by the New Zealand attack and one last fall at a synagogue in Pittsburgh and boasted about how “easy” it is to burn down or shoot up a mosque, synagogue, immigration center, or “traitorous” politicians, according to court documents. 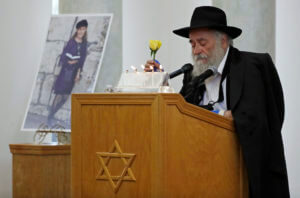 FILE – In this April 29, 2019 file photo, Yisroel Goldstein, Rabbi of Chabad of Poway, holds a yellow rose as he speaks at the funeral for Lori Kaye, who is pictured at left, in Poway, Calif.  (AP Photo/Gregory Bull, File)

Authorities said Earnest frequented dark corners of the web that often post extremist, racist and violent views. In one posting, he said, “As an individual, I can only kill so many Jews.”

On March 19, four days after that massacre, Earnest sent a text message to a person, whose name was redacted from the documents, complaining none of the links to the livestream video of the massacre were working and said of the suspect’s online screeds, “I’ve only read a little but so far he’s spot on with everything.”

The day before the synagogue shooting, Earnest bought a Smith & Wesson AR-15 rifle from a San Diego gun shop, according to federal charges. Officials have said he bought the gun legally.