WASHINGTON (AP) — Adding to the country’s ongoing discussion of the extent of police powers, the Supreme Court on Wednesday put limits on when police officers pursuing a fleeing suspect can enter a home without a warrant.

The high court ruled that when officers are pursuing someone suspected of a misdemeanor, a less serious crime, they cannot always enter a home without a warrant if a suspect enters.

The court had previously given police greater freedom to enter homes in cases involving more serious crimes. In a 1976 case, the justices said that police in “hot pursuit” of a suspect believed to have committed a felony can enter a home without a warrant. 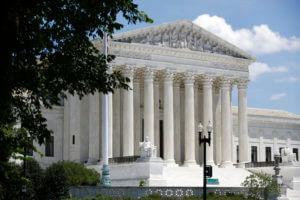 In this June 29, 2020 file photo, the Supreme Court is seen on Capitol Hill in Washington. (AP Photo/Patrick Semansky)

The case the justices decided Wednesday is important both to law enforcement and to groups concerned about privacy. But it doesn’t give police a bright line for when they can and cannot enter a home to pursue someone suspected of committing a misdemeanor.

“The flight of a suspected misdemeanant does not always justify a warrantless entry into a home. An officer must consider all the circumstances in a pursuit case to determine whether there is a law enforcement emergency. On many occasions, the officer will have good reason to enter — to prevent imminent harms of violence, destruction of evidence, or escape from the home. But when the officer has time to get a warrant, he must do so — even though the misdemeanant fled,” Justice Elena Kagan wrote in a majority opinion for seven members of the court that included both liberals and conservatives.

Chief Justice John Roberts and Justice Samuel Alito said that, in their view, a suspect’s choice to flee alone should give police the ability to pursue that person into a home. They suggested the majority’s opinion leaves too much for officers in the field to consider in the midst of a chase, providing “no guidance at all.”

“The Constitution does not demand this absurd and dangerous result,” Roberts wrote.

Elizabeth Wydra, president of the liberal Constitutional Accountability Center, said it remains to be seen how the decision will play out in the real world. The decision does not bar police from homes when they are chasing a misdemeanor suspect, but it does not give them free reign to enter either.

“As our country continues to grapple with the limits and problems associated with law enforcement’s powers, the Court’s refusal to allow police unfettered entry into the home is welcome,” she wrote in a statement.

Larry H. James, general counsel for the National Fraternal Order of Police, which filed a brief in the case, said he does not see much changing for police as a result of the ruling. The decision tells police to do what they always do, he said, which is “use your common sense, use your training.” He said the guidance for police from the ruling is: “When the situation warrants immediate action, take it. When it doesn’t, get a warrant.”

The case before the justices involved California resident Arthur Lange. One evening in 2016, an officer saw Lange driving his station wagon in Sonoma County, playing music loudly and honking his horn several times. The officer believed those were noise violations punishable by small fines and followed Lange. The officer later turned on his car’s lights to get Lange to stop. But Lange continued driving for about four seconds, turned into his driveway and entered his garage without stopping.

The officer got out of his car and, as Lange’s garage door was closing, stuck his foot under the door so it would re-open. Lange was ultimately arrested after the officer smelled alcohol on his breath, and he was charged with driving under the influence as well as an excessive noise offense.

Lange argued that the officer’s entry into the garage without a warrant violated his Fourth Amendment right to be free of “unreasonable searches and seizures.” The justices sent his case back to lower courts to be reevaluated in light of their decision.