WASHINGTON (AP) — The Supreme Court has agreed to hear a new clash involving religion and the rights of LGBTQ people in the case of a Colorado web designer who says her religious beliefs prevent her from offering wedding website designs to gay couples. 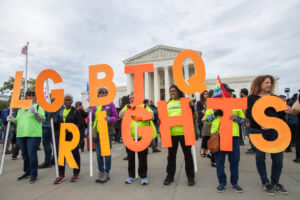 FILE – In this Oct. 8, 2019, file photo, supporters of LGBTQ rights hold placards in front of the U.S. Supreme Court in Washington. The Supreme Court has ruled that a landmark civil rights law protects gay, lesbian and transgender people from discrimination in employment. It’s a resounding victory for LGBT rights from a conservative court. (AP Photo/Manuel Balce Ceneta, File)

The high court said Tuesday it would hear the case of Lorie Smith. The Denver-area designer offers graphic and website design services and wants to expand to wedding website services, but she says her Christian beliefs would lead her to decline any request from a same-sex couple to design a wedding website. She also wants to post a statement on her website about her beliefs. Doing those things, however, would run afoul of a Colorado anti-discrimination law. Smith had argued the law violates her free speech and religious rights.

The Supreme Court said in taking the case that it would look only at the free speech issue. It said it would decide whether a law that requires an artist to speak or stay silent violates the free speech clause of the First Amendment. The case is expected to be argued in the fall.

Smith’s attorney, Kristen Waggoner, said in a statement after the court agreed to hear the case that “Colorado has weaponized its law to silence speech it disagrees with, to compel speech it approves of, and to punish anyone who dares to dissent.”

Colorado Attorney General Phil Weiser said the Supreme Court has consistently held that anti-discrimination laws like the one in his state apply to all businesses selling goods and services.

“Companies cannot turn away LGBT customers just because of who they are,” Weiser said in an emailed statement. “We will vigorously defend Colorado’s laws, which protect all Coloradans by preventing discrimination and upholding free speech.”

In a 2-1 ruling last year, the Denver-based 10th U.S. Circuit Court of Appeals denied Smith’s attempt to overturn a lower court ruling throwing out her legal challenge. The panel said Colorado had a compelling interest in protecting the “dignity interests” of members of marginalized groups through its law, the Colorado Anti-Discrimination Act.

The law, which prohibits discrimination on the basis of sexual orientation, is the same one at issue in the case of Colorado baker Jack Phillips that was decided in 2018 by the U.S. Supreme Court.

The high court said at the time that the Colorado Civil Rights Commission had acted with anti-religious bias against Phillips after he refused to bake a cake for two men who were getting married. But it did not rule on the larger issue of whether a business can invoke religious objections to refuse service to LGBTQ people.