WASHINGTON (AP) — Jed Leiber was an adult before he learned that his family was once part-owner of a collection of centuries-old religious artworks now said to be worth at least $250 million.

Over a steak dinner at a New York City restaurant in the 1990s he had asked his mother about his grandfather, a prominent art dealer who fled Germany after Adolf Hitler came to power. “What was grandpa most proud of in his business?” he asked. 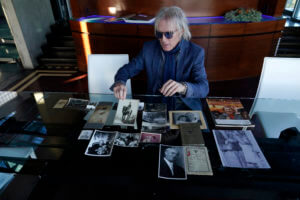 “He was very, very proud to have acquired the Guelph Treasure, and then was forced to sell it to the Nazis,” she told him.

That conversation set Leiber, of West Hollywood, California, on a decadeslong mission to reclaim some 40 pieces of the Guelph Treasure on display in a Berlin museum. It’s a pursuit that has now landed him at the Supreme Court, in a case to be argued Monday.

For centuries, the collection, called the Welfenschatz in German, was owned by German royalty. It includes elaborate containers used to store Christian relics; small, intricate altars and ornate crosses. Many are silver or gold and decorated with gems.

Now, the Supreme Court, which has been hearing arguments by telephone because of the coronavirus pandemic, will weigh in. A separate case involving Hungarian Holocaust victims is being heard the same day.

At this point, the Guelph Treasure case is not about whether Leiber’s grandfather and the two other Frankfurt art dealer firms that joined to purchase the collection in 1929 were forced to sell it, a claim Germany and the foundation dispute. It’s just about whether Leiber and two other heirs of those dealers, New Mexico resident Alan Philipp and London resident Gerald Stiebel, can continue seeking the objects’ return in U.S. courts. 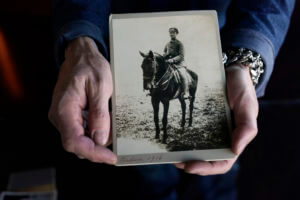 Jed Leiber shows a photo of his grandfather Saemy Rosenberg as a cavalry officer with the German army during WWI at home Thursday, Dec. 3, 2020, in Los Angeles. (AP Photo/Marcio Jose Sanchez)

In a statement, Hermann Parzinger, president of the Prussian Cultural Heritage Foundation, argued that the suit should be dismissed. The foundation and Germany have the Trump administration’s support.

“Our view is that Germany is the proper jurisdiction for a case which involves a sale of a collection of medieval German art by German art dealers to a German state,” Parzinger said.

The suit’s claim that the Guelph Treasure was sold under Nazi pressure was also diligently investigated in Germany, he said. The foundation found that the sale was made voluntarily and for fair market value. A German commission dedicated to investigating claims of property stolen by the Nazis agreed.

Parzinger said records “clearly show that there were long and tough negotiations on the price and that the two sides met exactly in the middle of their initial starting prices.”

The art dealers’ heirs, however, say the purchase price, 4.25 million Reichsmark, was about one-third of what the collection was worth. Under international law principles, sales of property by Jews in Nazi Germany are also presumed to have been done under pressure and therefore invalid, said the heirs’ attorney, Nicholas O’Donnell.

Leiber’s grandfather, Saemy Rosenberg, and the two other Frankfurt art dealer firms he joined with to purchase the Guelph Treasure did sell other pieces of the collection outside of Germany. But their timing was unfortunate. The Great Depression hit soon after they purchased the collection. Some of the pieces were sold to The Cleveland Museum of Art or private collectors. The Nazi-controlled state of Prussia bought the remaining pieces in 1935. The two sides disagree on whether the collection was ultimately presented to Hitler as a gift. 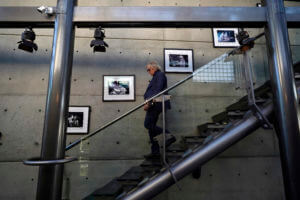 Leiber says his grandfather never said anything to him about the collection, though the two played chess together on Sundays from the time he was 5 to when he was 11.

Rosenberg reestablished his art business in New York. When he died in 1971, The New York Times called him a “leading international art dealer,” noting that his clients had included oil tycoon Paul Getty, CBS Chairman William S. Paley and the Metropolitan Museum of Art.

In the nearly 50 years since his grandfather’s death, Leiber has had his own star-studded career. In 1992, he founded NightBird Recording Studios at the Sunset Marquis Hotel in West Hollywood, where his clients have included Madonna, U2, Miley Cyrus and Justin Bieber. He’s particularly proud of his work with guitarist Jeff Beck and the late Aretha Franklin. But his grandfather was a singular influence on him.

“He’s a super-human figure in my life,” Leiber said. “And I decided that I had to do whatever it took to have returned what was taken from him.”