An heir to the Hot Pockets fortune who was sentenced to five months in prison in the college admissions bribery scheme asked a judge Wednesday to allow her to serve her punishment at home because of the coronavirus pandemic. 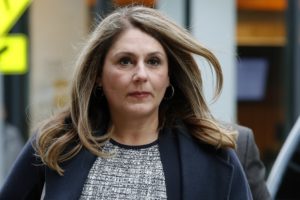 FILE – In this Feb. 25, 2020, file photo, Michelle Janavs arrives at federal court in Boston for sentencing in a nationwide college admissions bribery scandal. Lawyers for Janavs, who is supposed to report to prison in May, said in a legal filing Wednesday, April 22, 2020, that she should spend five months in home confinement instead of prison because she has an underlying health condition that makes her particularly vulnerable if she were to contract the coronavirus. (AP Photo/Elise Amendola, File)

Lawyers for Michelle Janavs, who is supposed to report to prison next month, said in a legal filing that she has a health condition that makes her particularly vulnerable if she were to get the virus behind bars. Instead, she should spend five months in home confinement, her attorneys said.

“If Ms. Janavs were to surrender to (Bureau of Prisons) custody, she is highly likely to become infected with COVID-19. And because of her underlying health condition, she faces a much higher risk than others of serious complications, hospitalization, or death from the virus,” her lawyers wrote.

Details about her health condition were blacked out in the filing. Her lawyers noted that Attorney General William Barr has instructed officials to consider moving nonviolent and vulnerable inmates to home confinement to help limit the spread of the virus behind bars.

As of Wednesday, no cases of COVID-19 were reported at FPC Bryan, the minimum-security prison camp where she’s supposed to serve, according to online records. More than 560 inmates and 340 Bureau of Prisons staff nationwide have tested positive for the virus, the agency says. Twenty four inmates have died.

Janavs, whose father and uncle invented the microwaveable Hot Pockets turnovers before selling their company, was sentenced in February after the judge said prison time was needed to deter others who might use their wealth to break the law. She apologized for her actions and for hurting her family and friends.

Janavs admitted to paying the consultant at the center of the scheme, Rick Singer, $100,000 to have a proctor correct her two daughters’ ACT exam answers. She also agreed to pay $200,000 to have one of her daughters labeled as a fake beach volleyball recruit at the University of Southern California but was arrested before she was formally admitted, prosecutors said.

Last week, Judge Nathaniel Gorton ordered that another parent who admitted to participating in the bribery scheme be freed from prison early because of the pandemic.

Toby Macfarlane, a former real estate executive from Del Mar, California, was released Tuesday to home confinement after his lawyers argued the conditions behind bars put him at serious risk of contracting the virus.