If the Supreme Court decides to overturn or gut the decision that legalized abortion, some fear that it could undermine other precedent-setting cases, including civil rights and LGBTQ protections.

Overturning Roe v. Wade would have a bigger effect than most cases because it was reaffirmed by a second decision, Planned Parenthood v. Casey, three decades later, legal scholars and advocates said. The Supreme Court’s conservative majority signaled in arguments last week they would allow states to ban abortion much earlier in pregnancy and may even overturn the nationwide right that has existed for nearly 50 years. A decision is expected next summer. 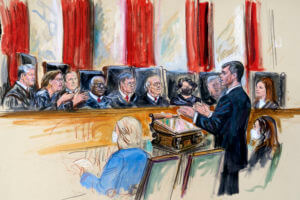 “If a case like Roe, which has this double precedent value, is overturned simply because there’s a change in the composition of the court, there’s really no way that we can have confidence in any of those precedents going forward,” said Samuel Spital, director of litigation at the NAACP’s Legal Defense Fund.

Anti-abortion advocates and legal scholars, meanwhile, argue that the Roe decision was unique, both in its legal reasoning and effects, and so overturning it wouldn’t affect other landmark cases.

“In Roe, I think you have really just a particularly bad decision,” said Erin Hawley, senior appellate counsel for Alliance Defending Freedom, a conservative legal group. She did not expect a Supreme Court decision against Roe to affect landmark cases that legalized same-sex marriage and LGBTQ intimacy.

Other experts disagree. Alison Gash, a professor at the University of Oregon, said Obergefell v. Hodges, which made same-sex marriage legal, and Lawrence v. Texas, which overturned laws which criminalized same-sex intimate relationships, rest on the same legal precedent.

Justice Brett Kavanaugh mentioned those two landmark cases for the LGBTQ community during the Supreme Court arguments last week, along with Brown v. Board of Education, which ended race-based school separation and Gideon V. Wainwright, which said indigent defendants must have representation.

All of those, Kavanaugh said, were cases where the high court overturned precedent. If they had not “the country would be a much different place.”

Those cases, though, are distinctly different, said Melissa Murray, a law professor at New York University. By overturning those precedents, the court expanded civil rights for more Americans. Overturning Roe, by contrast, would take rights from women.

“We have never had significant overturning of precedent for the purpose of withdrawing rights. It’s always worked the other way, to expand rights. Not to withdraw them,” she said.

The reference to Brown v. Board of Education, meanwhile, was “offensive and disturbing,” Spital said. While justices often pose hypotheticals, comparing Roe to an 1896 court decision that “facilitated the legal dehumanization of Black people” crossed a line, he said.

For anti-abortion advocates, though, the Roe decision allows for “the purposeful termination of a human life,” as Mississippi Solicitor General Scott Stewart put it during arguments. “Nowhere else does this court recognize the right to end a human life,” he said.

A decision in favor of Mississippi wouldn’t call into question any of those other civil rights cases, he argued.

The Obergefell case that gave LGBTQ people the legal right to marriage would also be safe because thousands of same-sex couples have relied on it to wed, and reliance like that makes courts less likely to make a major change, said Teresa Collett, a University of St. Thomas School of Law and director of its Prolife Center. “In short, I think overruling Roe and Casey will have zero impact on Lawrence and Obergefell as binding legal precedent,” she wrote in an email.

At least some conservative attorneys have a different point of view. The lawyer who conceived Texas’ strict new abortion ban also suggested that same-sex intimacy and marriage are “court-invented rights” in a brief filed in support of the Mississippi law. Jonathan Mitchell argued for the Supreme Court to not only overturn Roe and Casey, but to “write an opinion that leaves those decisions hanging by a thread.”

“Lawrence and Obergefell, while far less hazardous to human life, are as lawless as Roe,” he wrote.

That line of thinking has some LGBTQ advocates deeply concerned.

The Obergefell decision, she said, came after decades of LGBTQ people all over the country coming out, ensuring that millions of people knew they had a gay loved one. By contrast, abortion is often still considered a private matter between a patient and doctor.

“It is possible for people walking around today to believe that they don’t know anyone who’s had an abortion,” said Taylor, adding that she herself had an abortion at age 40. The pregnancy would have been medically risky, and more importantly for her, she didn’t have the resources to care for a third child. “Coming out played a big role in securing civil rights for LGBTQ people … that’s the only way we can achieve an acknowledgement that the people who get abortions are humans, equally human, with lives and dreams that deserve some modicum of respect.”

Sarah Warbelow, legal director with the Human Rights Campaign, said she doesn’t necessarily see a direct effect on LGBTQ cases from a Roe decision. But after a “historically bad state legislative session” for LGBTQ rights it could “encourage state lawmakers that are pandering to the base to test the limits of court-recognized LGBTQ equality.”