SAN DIEGO (KGTV) – Nearly a month after California eased restrictions related to COVID-19, the California Highway Patrol says they see a “noticeable uptick” in incidents of Road Rage on the state’s freeways.

Official numbers won’t come out until the end of the year, but CHP Officer Sal Castro told ABC 10News his officers in San Diego had received a higher volume of calls for highway violence in the last month. 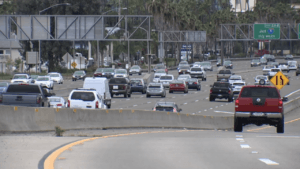 CHP has seen ‘noticeable uptick’ in cases In the month since California eased restrictions related to COVID-19, CHP officers say they’ve seen a “noticeable uptick” in the number of incidents of road rage. (Photo by: ABC 10News)

“People are getting impatient,” Castro says. He pointed out that drivers got used to wide-open freeways during the pandemic, and the rise in traffic is causing more stress.

“We’ve had reports of drivers following others for several miles. We’ve heard of people trying to cut people off or run them off the road. Some people are actually pointing firearms at them, and we’ve had shootings,” he says.

One shooting took place on June 25 on Interstate 15 near state Route 56. A man says he flashed his brights at another driver who cut him off. The other driver then shot at his car twice. No one was injured.

In another instance, one man was stabbed to death in downtown San Diego after a fight resulting from an alleged road rage case on June 26.

In Mission Bay, a woman told police she was chased and hit by another driver, which led to a three-car pileup on June 23.

On June 28, two people were injured in a crash on Interstate 5 in the South Bay. The driver of one car says he honked at another driver who almost hit him while merging into his lane. He says the other driver then slammed on his breaks, causing a chain-reaction crash with a third car.

Those are just a few of the incidents Castro says his colleagues have seen in the past month.

“You can never anticipate another driver’s actions or what they’re going to do,” he says.

Psychologists have already called incidents like this “COV-Rage,” and say they’re a result of more than a year’s worth of stress from the Pandemic.

“There has been such a roller coaster of change,” says Dr. Michelle Carcel, a clinical psychologist in San Diego. “As humans, we’re just not built for quick change. We need gradual change.”

Carcel says the rapid return to normalcy, with commutes and traffic and stress suddenly returning to people’s lives, has Americans on edge. That, coupled with the confusion and uncertainty of the pandemic, variants, and new rules, leads to anger.

“If you’re feeling rage, it’s probably an indication that there’s more going on in your life. There’s more under the hood, so to speak,” she says. “Underneath all that anger, underneath the rage is usually pain and hurt. People need to do a check-in emotionally and just say, ‘How am I feeling right now,’ before they get behind the wheel.”

She advises simple breathing or mindfulness exercises to make sure you’re in the right frame of mind to drive. Dr. Carcel also says listening to music or a podcast you enjoy can help de-stress the drive.

Meanwhile, if you find yourself on the receiving end of a road rage incident, Castro says it’s best to pull over in a safe, well-lit space and call 911. He says never try to follow another driver.

This story was originally published July 8, 2021, by KGTV in San Diego.