INDIANAPOLIS (AP) — Lawyers for an Indianapolis doctor who provided an abortion to a 10-year-old rape victim from Ohio told a judge Friday that Indiana’s attorney general should not be allowed to access patient medical records for an investigation into undisclosed complaints. 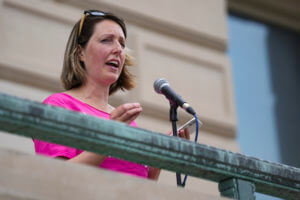 Dr. Caitlin Bernard; her medical partner, Dr. Amy Caldwell; and their patients sued Republican Attorney General Todd Rokita on Nov. 3 to try to stop him from accessing the records. The doctors claim Rokita’s conduct “violates numerous Indiana statutes,” including a state requirement that his office first determine consumer complaints have “merit” before he can investigate physicians and other licensed professionals.

The state argued it is allowed to access the records to investigate three consumer complaints that accuse Bernard of improper care.

“The consumer complaints were 100% filed by people who had never met Dr. Bernard, had never gotten medical care from Dr. Bernard, were not involved in the care of this patient in any way shape or form,” attorney Kathleen DeLaney refuted in a press conference after the hearing. “They’re complaining about something that they saw on television or heard about on social media.”

Bernard first received national attention after she told The Indianapolis Star about a 10-year-old girl who traveled to Indiana from Ohio for an abortion in June, shortly after Ohio’s “fetal heartbeat” law took effect following the U.S. Supreme Court’s decision to overturn Roe v. Wade. Such laws ban abortions from the time cardiac activity can be detected in an embryo, which is typically around the sixth week of pregnancy.

Rokita told Fox News in July that he would look into whether Bernard violated child abuse notification or abortion reporting laws. He offered no specific allegations of wrongdoing, and court records from Thursday indicate he is no longer investigating Bernard “for failing to comply” with the abortion reporting law.

Records obtained by The Associated Press and other news outlets show Bernard submitted her report about the girl’s abortion July 2, which is within Indiana’s required three-day reporting period for an abortion performed on a girl younger than 16.

A 27-year-old man was charged that month in Columbus, Ohio, with raping the girl, confirming the existence of the case, which initially was met with skepticism by some media outlets and Republican politicians. President Joe Biden expressed empathy for the child while signing of an executive order protecting some abortion access.

Kelly Stevenson, a spokesperson for the attorney general’s office, said in an email that “our team always follows the law and pursues the truth — as that is the role of the Attorney General.”

“We put the highest value on patient privacy and ethical standards in medicine. We will continue to push forward in this legal battle to ensure every patient’s privacy is protected in Indiana,” she added.

But DeLaney said that because of the 27-year-old man’s arrest, “the notion that Dr. Barnard didn’t cooperate with law enforcement is simply not true.”

State lawyer Caryn Nieman-Szyper on Friday also questioned whether anything Bernard said to The Indianapolis Star violated federal medical privacy laws. Nieman-Szyper honed in specifically on rules under the federal privacy law known as HIPAA, for Health Insurance Portability and Accountability Act, that prohibit a physician from divulging certain dates associated with their patients.

At the court hearing, the doctors’ lawyers called three physicians — two bioethicists and an obstetrician-gynecologist — who described before Marion County judge Heather Welch that honoring the doctor-patient relationship is a cornerstone of medical care.

Dr. Kyle Brothers, a pediatrician from Louisville, described the link as “an agreement, a promise” and that if the government were to seize a patient’s medical records, the patient’s trust in their doctor could be broken and dissuade them from seeking care.

“This kind of disclosure, especially for a minor, is heartbreaking, or something like that,” he said. “Something really horrible.”

Welch plans to rule over the weekend whether Bernard, who was out of the country Friday, will testify.

“Every patient needs to know that their medical records will not be handed over to any politician who decides to open an unfounded investigation based on their own political agenda,” Bernard said in a statement.