CHICAGO (AP) — A federal judge in Chicago Thursday ordered one of the nation’s largest jails to take prompt action to stem the potentially catastrophic spread of the coronavirus, including by ensuring that its more than 4,000 detainees have access to adequate soap and sanitizer. 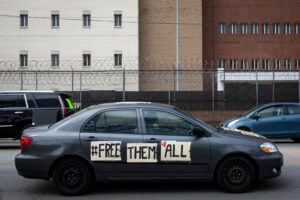 FILE – In this April 7, 2020 file photo, amid fears of the coronavirus pandemic, dozens of protesters drive around Cook County Jail and the Leighton Criminal Courthouse in Chicago, honking their horns and chanting to demand the “mass release” of detainees at the jail. A federal judge has ordered Cook County Jail on Thursday, April, 9, 2020, to take steps to protect inmates from coronavirus. (Ashlee Rezin Garcia/Chicago Sun-Times via AP File)

U.S. District Judge Matthew Kennelly also mandated that Chicago’s Cook County Jail test all inmates as soon as they show signs of COVID-19, the disease caused by the virus, and that it suspend the use of small holding pens to process new inmates.

Kennelly said in his 37-page order that he appreciates the challenges of managing such a large, diverse inmate population, many of whom are dangerous. And that task is all the more difficult during a pandemic.

“This does not mean, however, that constitutional protections fall by the wayside,” he said. “Persons accused of crimes who are detained pending trial do not shed their constitutional rights at the jailhouse door.”

His order says the jail must start dispensing soap, sanitizer or both to all inmates by Friday.

The order came in response to a lawsuit filed on April 3 on behalf of two inmates. Cook County Sheriff Tom Dart, who oversees the jail, is named as the defendant. 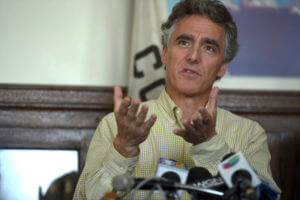 Dart said the main reason so many detainees have tested positive — 276 at last count — is that the jail has been testing anyone who shows symptoms.

“I have been doing more testing than anybody,” he said.

One inmate died of complications from the virus this week. Some 150 jail staff have tested positive, according to Kennelly’s order.

For most people, the coronavirus causes mild or moderate symptoms, such as fever and cough that clear up in two to three weeks. For some, especially older adults and people with existing health problems, it can cause more severe illness, including pneumonia.

A 25-year-old detainee who was released Monday said the facility was in “complete chaos” as inmates and officers struggled to deal with the virus.

“You’re a little bit less than a human being when you’re locked up,” said Charles Woodhouse, who has asthma. He has moved into a youth house that is part of the Inner-City Muslim Action Network’s Green ReEntry program.

House manager Steven Hawthorne has been in touch with detainees. He said they feel “truly helpless.”

“When you’re in a room that’s 9 feet by 6 feet, and 6 feet is across, not apart, how do you socially distance in that kind of situation?” Hawthorne said.

FILE – In this June 26, 2014, file photo inmates at the Cook County jail head off to bond court after their arrested the night before in Chicago. A federal judge has ordered Cook County Jail to take steps to protect inmates from coronavirus. (AP Photo/Charles Rex Arbogast File)

Dozens of inmates live in crowded tier rooms, making social distancing impossible, Kennelly said. He cited allegations that the staff does not always thoroughly clean rooms where an inmate who tested positive stayed.

But Dart called the judge’s ruling a “victory for us” because, he insisted, the jail was already doing all but one of the things the judge said to do — provide masks to all inmates who are quarantined.

He said he would look for more masks although they may be hard to find as they are in short supply for everyone.

To slow the spread of the virus in the jail, another judge in late March ordered bail reduction hearings to bring down the jail population by releasing detainees not considered a threat. As a result, the jail population has dropped by nearly 1,000 to under 4,500, sheriff’s department statistics indicate.

Kennelly said he wants the jail to report on the implementation of his order by April 13.

The U.S. District Court in Chicago, like courts nationwide, is largely closed due to the coronavirus and nearly all civil cases are on hold. Kennelly was designated “an emergency judge,” who can take up urgent matters.