YUMA, Ariz. (AP) — A Yuma couple have been sentenced to time behind bars on convictions stemming from a 2020 incident in which they fought with police after coughing on Walmart employees who asked them to wear masks during early months of the pandemic.

A judge on Thursday sentenced Frank Robert Montoya, 39, to 18 months in state prison minus 113 days of time served, while Victoria Parra-Carranza, 25, was given a three-year probation term that includes 30 days in the county jail. 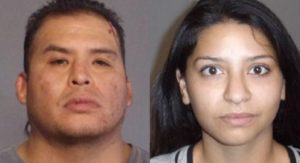 Both were convicted in April of aggravated assault on a police officer, resisting arrest and other crimes, the Yuma Sun reported.

The convictions stemmed from an incident in which police said officers responded to a report of disorderly conduct after Montoya and Parra Carranza refused to wear masks and started coughing on store employees who asked them to leave.

The couple tried to leave and fought with officers after an officer tried to speak with them to give them an official trespass notice, police said.

Saying she has financial responsibilities and may lose her job, Parra Carranza asked Superior Court Judge Roger Nelson to not impose the jail sentence.

Nelson refused, saying he considered sending her to prison but didn’t because she hadn’t previously had trouble with the law.

“You are going to jail. You probably deserve more,” Nelson said. “Criminal actions have consequences.”

The incident occurred during the 2020 surge that saw Arizona become a national hot spot.

Virus-related hospitalizations remained over 2,000 for the 18th straight day, with 2,034 virus patients occupying hospital beds as of Thursday, according to the state’s coronavirus dashboard.

The state’s seven-day rolling averages of daily new cases and daily deaths both decreased over the past two weeks, according to Johns Hopkins University data.