JACKSON, Miss. (AP) — As attorneys argued about abortion laws across the South on Tuesday, a Mississippi judge rejected a request by the state’s only abortion clinic to temporarily block a law that would ban most abortions.

Without other developments in the Mississippi lawsuit, the clinic will close at the end of business Wednesday and the state law will take effect Thursday. 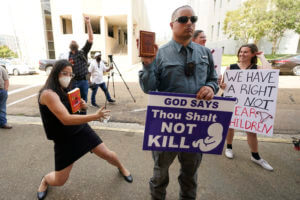 Anti-abortion activist Gabriel Olivier, center, holds his Bible and a message sign while abortion rights supporters hold counter signs and dance around him, as he and other anti-abortion supporters call out to people leaving the Hinds County Chancery Court, Tuesday, July 5, 2022, in Jackson, Miss., after a hearing in a lawsuit brought by the state’s only abortion clinic that seeks to block a law that would ban most abortions. (AP Photo/Rogelio V. Solis)

One of the clinic’s attorneys, Hillary Schneller of the Center for Reproductive Rights, said the judge should have blocked the law.

“People in Mississippi who need abortions right now are in a state of panic, trying to get into the clinic before it’s too late,” Schneller said. “No one should be forced to live in fear like that.”

Mississippi legislators passed the “trigger” law before the U.S. Supreme Court recently overturned the 1973 Roe v. Wade ruling that legalized abortion nationwide. The clinic, Jackson Women’s Health Organization, sought a temporary restraining order that would have allowed it to remain open while the lawsuit played out in court.

“This law has the potential to save the lives of thousands of unborn Mississippi children,” Republican Gov. Tate Reeves said after the judge’s ruling. “It is a great victory for life. I also believe it is critical that we showcase to every mother and child that they are loved and that their communities will support them.”

The closely watched lawsuit was part of a flurry of activity nationwide since the Supreme Court ruled. Conservative states have moved to halt or limit abortions while others have sought to ensure abortion rights, all as some women try to obtain the medical procedure against the changing legal landscape. 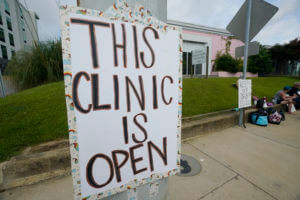 A posted sign outside the Jackson Women’s Health Organization clinic assures potential patients that is open, Sunday, July 3, 2022, in Jackson, Miss. The clinic is the only facility that performs abortions in the state. On June 24, the U.S. Supreme Court overturned Roe v. Wade, ending constitutional protections for abortion. However, a Mississippi judge has set a hearing for Tuesday, in a lawsuit by the state’s only abortion clinic that seeks to block a law that would ban most abortions. (AP Photo/Rogelio V. Solis)

Elsewhere in the South, Florida’s new 15-week abortion ban was blocked but then quickly reinstated Tuesday after an appeal from the state attorney general in a lawsuit challenging the restriction. Judge John C. Cooper issued the order temporarily halting the law after reproductive health providers argued that the state constitution guarantees a right to the procedure. The state quickly appealed his order, automatically putting the law back into effect.

The Florida law makes exceptions if the procedure is necessary to save the pregnant woman’s life, prevent serious injury or if the fetus has a fatal abnormality. It does not allow for exemptions for pregnancies caused by rape, incest or human trafficking.

The law, which went into effect Friday, was passed by the GOP-controlled legislature and signed by Republican Gov. Ron DeSantis this spring.

In Louisiana, the state attorney general has asked the state Supreme Court to allow enforcement of a ban on most abortions. Louisiana’s anti-abortion statutes include so-called triggers that were designed to instantly take effect if the U.S. Supreme Court were to reverse abortion rights. But a state judge in New Orleans last week blocked enforcement of the law pending a court hearing on a lawsuit filed by a north Louisiana abortion clinic and others.

The Louisiana suit says the law is unclear on when the ban takes effect and on medical exceptions. The attorney general’s application to the Supreme Court, filed over the holiday weekend and announced Tuesday, says the order blocking enforcement should be dissolved.

The north Louisiana clinic’s attorneys argued in a Tuesday afternoon brief that it’s premature for the high court to get the case before the district judge and an appellate court have had a chance to more fully consider the issues.

Mississippi was one of several states with a trigger law contingent on the Supreme Court overturning Roe v. Wade. The law passed in 2007 and has never been challenged in court. It says abortion will be legal only if the pregnant woman’s life is in danger or if a pregnancy is caused by a rape reported to law enforcement. It does not have an exception for pregnancies caused by incest.

The clinic’s lawsuit cited a 1998 Mississippi Supreme Court ruling that said the state constitution invokes a right to privacy that “includes an implied right to choose whether or not to have an abortion.”

The state attorney general’s office argued that the 1998 ruling was rooted in U.S. Supreme Court decisions in 1973 and 1992 that established or protected abortion rights but were overturned on June 24. But Rob McDuff, a Mississippi Center for Justice attorney representing the clinic, argued that state justices never said their ruling was made because of the federal Constitution.

“They never said it would evaporate if Roe was ever overruled,” McDuff said in court Tuesday.

The state attorney general’s office said the Mississippi Constitution does not recognize a right to abortion and the state has a long history of restricting the procedure.

“In the past two weeks, the state of the law has changed dramatically,” the state solicitor general, Scott Stewart, argued Tuesday in court.

The lawsuit was filed three days after the Supreme Court overturned Roe v. Wade in a case that originated in Mississippi. The clinic had continued to see patients, but owner Diane Derzis said it will close if the near-ban on abortions takes effect.

In rejecting the clinic’s request hours after the hearing, Halford wrote, “The plain wording of the Mississippi Constitution does not mention abortion.” She added that it is “more than doubtful” that the Mississippi Supreme Court would continue to uphold its 1998 ruling now that the U.S. Supreme Court has overturned its own previous abortion rulings.

McDuff told The Associated Press that clinic attorneys will review Halford’s decision and consider whether to appeal it to the state Supreme Court.

An abortion-rights supporter performed an improvised dance in front of Siders to mock him, and several women laughed. 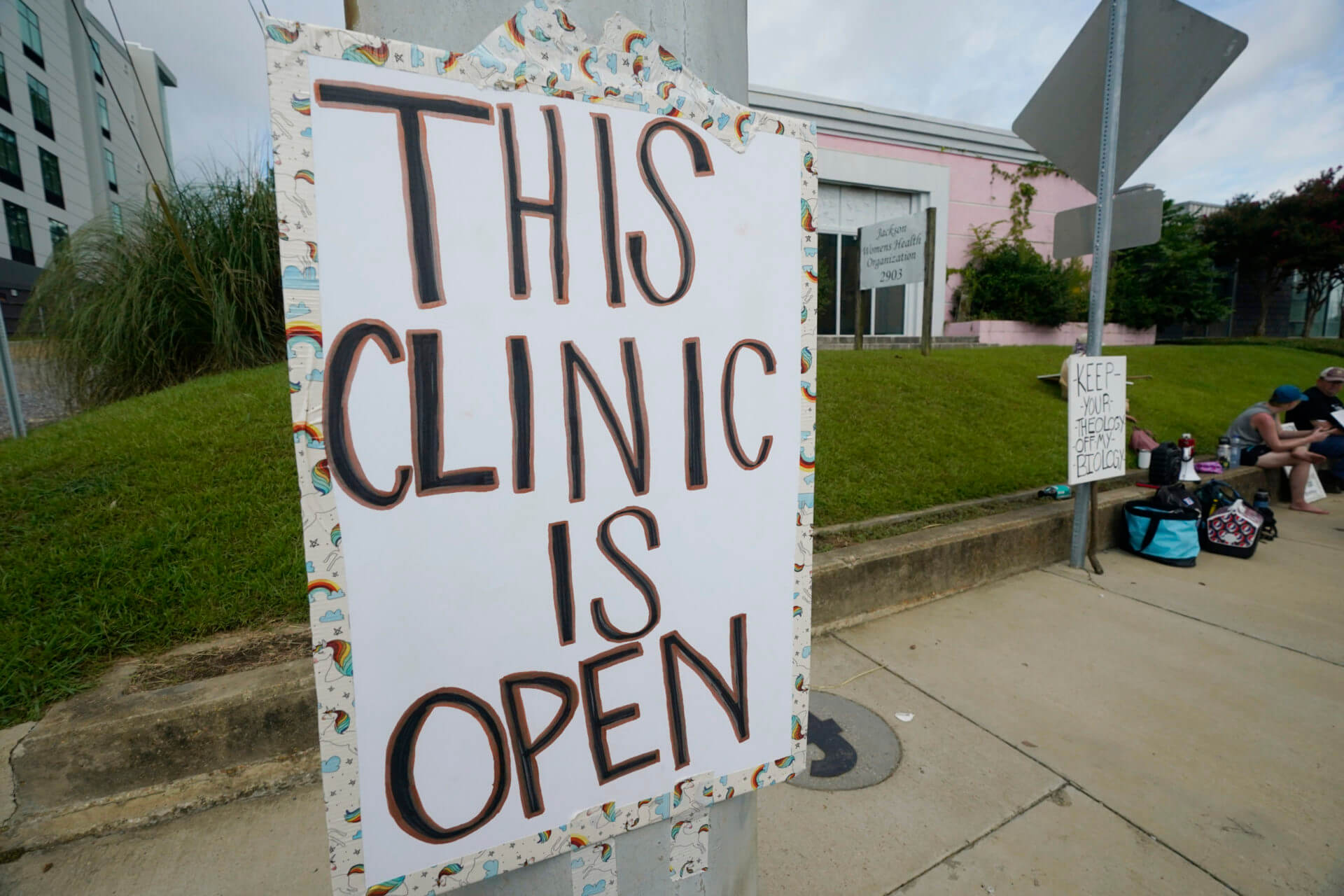 A posted sign outside the Jackson Women's Health Organization clinic assures potential patients that is open, Sunday, July 3, 2022, in Jackson, Miss. The clinic is the only facility that performs abortions in the state. On June 24, the U.S. Supreme Court overturned Roe v. Wade, ending constitutional protections for abortion. However, a Mississippi judge has set a hearing for Tuesday, in a lawsuit by the state's only abortion clinic that seeks to block a law that would ban most abortions. (AP Photo/Rogelio V. Solis)
MORE NEWS