KANSAS CITY, Mo. (AP) — A Kansas City, Missouri, police officer who kneed a Black 15-year-old in the neck and pushed his face into the ground pleaded guilty Thursday to third-degree assault and lost his law enforcement license.

Sgt. Matthew Neal was sentenced to four years of probation for his actions against the juvenile, who was a passenger in a vehicle police pursued on Nov. 14, 2019. 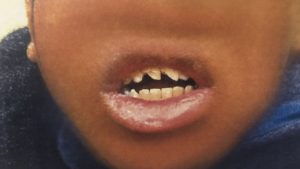 Prosecutors said the teenager was handcuffed and on his stomach on the ground when Neal pressed his knee into the teen’s head and neck, pinning his face into the pavement while the victim said “I can’t breathe.”

The teen suffered bruising, broken teeth and a gash on his head. He was not arrested or charged with a crime.

As part of his probation, Neal was required to give up his law enforcement license, prohibited from carrying a firearm, ordered to take an anger management course and to write a letter of apology to the victim.

“We are thankful to have resolved this case favorably,” said Neal’s attorney, Molly Hastings.

The victim’s attorney, Tom Porto, said he and his client were pleased with the outcome of the case. “It’s significant that a sergeant voluntarily pleaded guilty,” Porto said.

The victim did not appear in court Thursday because he wants to protect his privacy, the Jackson County Prosecutor’s office said.

In January 2021, the Kansas City Board of Police Commissioners agreed to a $725,000 settlement of an excessive use of force claim filed by the teenager.

Police spokeswoman Capt. Leslie Foreman said in a statement the incident was reviewed and discussed at all levels of the department.

“We expect Department members to treat all citizens with dignity and respect at all times, and it did not happen in this case.” Foreman said.

A grand jury indicted Neal in August 2020. At the time, Jackson County Prosecutor Jean Peters Baker said she was disturbed the incident occurred in November 2019 but her office was not made aware of it until the next spring.

Lora McDonald, executive director of MORE2, the Metro Organization for Racial and Economic Equity, said the guilty plea on Thursday shows the criticism was valid.

“He (Neal) should have been fired years ago. How long does it take them to complete an assault investigation of their own?” McDonald said, noting that over 10 officers witnessed the confrontation but Smith was unaware of it for months.