A coalition of abortion providers and advocates filed a federal lawsuit Tuesday challenging a Texas law that would allow private citizens to sue anyone for helping a woman get an abortion. 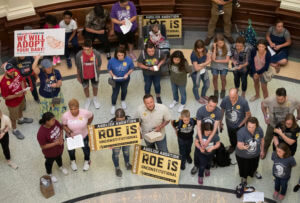 FILE – In this March 30, 2021 file photo, anti-abortion rights demonstrators gather in the rotunda at the Capitol while the Senate debated anti-abortion bills in Austin, Texas. Abortion-rights groups are challenging a new Texas law that bans abortions after six weeks of pregnancy and allows private citizens to file their own lawsuits as a way to enforce the ban. Texas is among several states passing abortion restrictions as the U.S. Supreme Court prepares to hear a case that could undo decades of abortion rights. (Jay Janner/Austin American-Statesman via AP, File)

In addition to asking the U.S. district court in Austin to overturn the law, the plaintiffs asked for an injunction that would stop it from taking effect in September.

The law would ban abortion in the nation’s second-biggest state after six weeks of pregnancy, which is before many women even know they are pregnant, and ask private citizens to enforce the ban by suing doctors or anyone who helps a woman get an abortion. Among other situations, that would include anyone who drives a woman to a clinic to get an abortion. Under the law, anyone who successfully sues another person would be entitled to at least $10,000.

The plaintiffs include clergy, physicians and clinics. They are represented by Planned Parenthood and the Center for Reproductive Rights, among others, who say the law could saddle abortion providers with lawsuits that consume their time and resources and ultimately force them to shut down.

Texas “has put a bounty on the head of anyone who so much as gives a patient money for an abortion after six weeks,” Nancy Northup, president of the Center for Reproductive Rights, said in a statement.

Opponents of the law also say its enforcement scheme makes it particularly difficult to challenge in court. In other states, six-week abortion bans are enforced by government officials, allowing plaintiffs to sue state officials responsible for enforcing the law.

Defendants in the lawsuit include every state court trial judge and county clerk in Texas, the Texas Medical Board, the Texas Board of Nursing, the Texas Board of Pharmacy, the state attorney general, and the director of Right to Life East Texas, Mark Lee Dickson, who has already called for people to sue their local abortion providers under the law.

“The only thing more ridiculous than this lawsuit is the fact that we have people, right here in Texas, who are fighting to end the lives of innocent unborn children,” Dickson wrote in a Facebook post Tuesday. Right to Life East Texas did not immediately reply to a phone message seeking comment about the lawsuit.

The law signed by Texas Republican Gov. Greg Abbott in May put Texas in line with more than a dozen other states that have laws that would ban abortions after a fetal heartbeat can be detected, which is typically around the sixth week. But federal courts have mostly blocked states from enforcing such measures.

The Supreme Court’s 1973 Roe v. Wade decision established a nationwide right to abortion at any point before a fetus can survive outside the womb, roughly 24 weeks. But the Supreme Court has agreed to consider allowing the enforcement of a Mississippi law that would ban abortion after 15 weeks of pregnancy, which could dramatically alter nearly 50 years of court precedent on abortion rights.

The case is about whether states can ban abortions before a fetus could viably survive outside the womb, and abortion rights activists worry that a ruling favorable to the state could lay the groundwork for allowing even more restrictions, including so-called fetal heartbeat bills.

Iris Samuels is a corps member for the Associated Press/Report for America Statehouse News Initiative. Report for America is a nonprofit national service program that places journalists in local newsrooms to report on undercovered issues.