ANNAPOLIS, Md. (AP) — The man who killed five people at a Maryland newspaper was delusional and believed the state’s judicial system was conspiring with the Capital Gazette to persecute him and ruin his life, his attorney told a jury Tuesday, trying to make the case that Jarrod Ramos is not criminally responsible for the crimes due to mental illness. 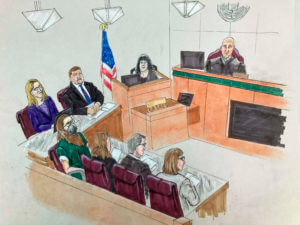 Hours after hearing that, jurors saw photographs of the dead from shotgun blasts in their own newsroom. They saw Wendi Winters collapsed in a hallway after she had just charged at Ramos with a trash can. They saw Gerald Fischman crumpled under his desk. They saw Rob Hiaasen dead in his cubicle. They also saw John McNamara dead at the back of the newsroom. Rebecca Smith died later at a hospital.

They also saw an officer’s body camera video, showing Ramos emerging from under a desk in the newsroom and police officers later leading him out.

Three years and a day after the attack on the newspaper, the second phase of a trial started for Ramos, who pleaded guilty — but not criminally responsible — to the June 28, 2018 slayings. The plea is Maryland’s version of an insanity defense.

Katy O’Donnell, Ramos’ lawyer, told jurors her client “is guilty of having committed these offenses, and his act was willful, deliberate and premeditated.” But, she said, mental health experts for the defense will tell them he is not criminally responsible under the law due to mental illness.

“Mr. Ramos is guilty, and he is also not criminally responsible,” O’Donnell said.

Ramos believed that he was being intentionally persecuted, O’Donnell said, after the newspaper wrote about a case in which he pleaded guilty to harassing a former high school classmate. Ramos also thought the courts were unfairly rejecting his defamation case against the newspaper, she said.

O’Donnell told the jury it will hear testimony about Ramos’ own description of the events as they unfolded on the day of the shooting, as well as “an eight-year backstory” that led up to the attack.

“We want you to understand the years leading up to this day,” O’Donnell said. “It’s chilling because Mr. Ramos does not believe what he did was wrong.”

O’Donnell said jurors also will hear from mental health experts who have evaluated Ramos and determined he is mentally ill, and doctors who will testify that Ramos is autistic. He also has obsessive compulsive disorder, delusional disorder and narcissistic personality disorder, she said.

O’Donnell explained Maryland’s insanity defense law to the jury: The state says a defendant is not criminally responsible for criminal conduct if — because of a mental disorder or developmental disabilities — he lacked substantial capacity to appreciate the criminality of his conduct.

Under the law, a defendant has the burden to show by a preponderance of the evidence that he is not criminally responsible for his actions.

Anne Colt Leitess, the Anne Arundel County state’s attorney, deferred her opening statement until after the defense presents its case.
In the afternoon, while cross-examining a county detective who investigated the case, Leitess started delving into the depth of planning that Ramos put into planning the attack.

She asked the detective to show jurors a device known as a barracuda that Ramos used to barricade a back door so that the victims could not escape from the newsroom.

Leitess also asked Anne Arundel County Det. Jason DiPietro about a CD that Ramos sent to the author of the article about him in the newspaper that angered him. It included his plans to attack the newsroom on a day when he believed a community meeting including people from outside the newsroom would be present and his plans to make “orphans” of a woman’s children. The meeting had been canceled that day.

Leitess also asked about Ramos’ purchase of a lifetime membership to the U.S. Chess Federation, four days before the shooting, in preparation for long incarceration. Police intercepted a letter he wrote to the federation in hopes of having chess materials sent to the detention center where he was confined.

The prosecution also has mental health witnesses who will be testifying.

Dr. Sameer Patel, a psychiatrist with the state Health Department who evaluated Ramos, determined that Ramos was legally sane. Prosecutors also plan to call Dr. Gregory Saathoff, a forensic psychiatrist and a chief consultant for the FBI who also has found Ramos to be legally sane.

Opening statements began one day after the third anniversary of the killings. This trial phase has been postponed repeatedly, in part due to the coronavirus pandemic.

If Ramos is found not criminally responsible, he will be committed to a maximum-security psychiatric hospital instead of prison. Prosecutors are seeking life in prison without possibility of parole.

Ramos, 41, had a well-documented history of harassing the newspaper’s journalists. His 2012 lawsuit, which alleged that the paper defamed him by writing about his conviction in the harassment case, was dismissed as groundless.