A Florida man who was part of a white supremacist prison gang when he served time for attempted murder pleaded guilty Monday to joining the mob that stormed the U.S. Capitol, and will be released from jail this week after serving six months for his role in the Jan. 6 riot.

Michael Curzio, who has been locked up since Jan. 14, is the first of more than 500 people charged with federal crimes in the Capitol attack to be sentenced to time behind bars. He was sentenced to six months after pleading guilty to a misdemeanor charge, but gets credit for the time already served and will be released on Wednesday. 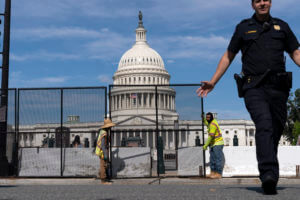 U.S. Capitol police officer push back people who are watching workers remove the fence surrounding the U.S. Capitol building, after six months was erected, following the Jan. 6 riot at the Capitol, on Saturday, July 10, 2021, in Washington. (AP Photo/Jose Luis Magana)

Curzio was arrested in Summerfield, Florida, for the Jan. 6 riot less than two years after he was released from a Florida prison in 2019 after serving an eight-year sentence for attempted murder. Court records from Florida show that he shot the boyfriend of his former girlfriend in a fight at her home.

Prosecutors pointed to his criminal record to keep him behind bars after his January arrest even though he faced only misdemeanor charges in the riot. Authorities wrote in court documents that Curzio was part of a violent white supremacist gang called the Unforgiven when he was behind bars in Florida and has tattoos with Nazi imagery.

On Jan. 6, Curzio was part of a crowd near the door to the House atrium that refused orders to leave, authorities say. His attorney said Monday that his sentence was “harsher than it should have been” because of his criminal record.

“He didn’t attack anybody. He didn’t break anything. He was just walking around the building like a lot of other people were,” attorney A. Eduardo Balarezo said in an interview.

Curzio’s lawyer wrote in court documents arguing for his release from jail that his client joined the Unforgiven “in order to survive in prison” after being attacked several times by other inmates. His lawyer wrote that Curzio is no longer associated with the gang but doesn’t have the funds to remove the tattoos.

“It is notable that on January 6, 2021, Mr. Curzio did not go to the Capitol in the company of any gang members; he did not wear any gang colors; he did not give a Nazi salute; he did not have any posters with Nazi insignias. In short, his presence at the Capitol had nothing to do with his prior gang affiliation,” Balarezo wrote in April.

Curzio is the second defendant to be sentenced for the Jan. 6 riot. The first person to be sentenced is an Indiana woman who pleaded guilty to a misdemeanor charge of parading, demonstrating or picketing in a Capitol building. She was ordered to serve three years of probation, perform 120 hours of community service and pay $500 in restitution.

More than a dozen defendants have pleaded guilty, including two members of the Oath Keepers militia group who admitted conspiring with other extremists to block the certification of Joe Biden’s victory.