DOUGLAS COUNTY, Colo. (KMGH) – A man wanted for the killing of two people in Douglas County, Colorado earlier this week was arrested in Kansas Wednesday. 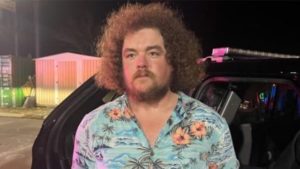 Once at the scene, deputies found a man and a woman, who were described as people in their 30s, inside a garage that was adjacent to the home. The woman was the suspect’s sister, according to an informed source close to the investigation who spoke with Denver7 chief investigative reporter Tony Kovaleski. The suspect also shot a dog on the property, the source said.

A manhunt was initiated for the suspect, identified as 29-year-old Casey Michael Devol. In a press conference, Spurlock said he should be considered armed and dangerous.

The suspect is an employee of the Town of Castle Rock, Colorado and has been working as a plant mechanic for the city since May 19, 2011.

Detectives tracked Devol to Salina, Kansas, where he was arrested without incident, according to the sheriff’s office. He is currently waiting extradition.

UPDATE: Suspect, Casey Devol has been located and taken into custody. Detectives were able to track him down to Salina, Kansas. With the assistance of state and local authorities he was taken into custody without incident. He will be taken to local jail awaiting extradition. https://t.co/JIEDGJdpdg pic.twitter.com/AKlNt5PACL

The sheriff told reporters at the briefing that the suspect is known to the two victims but could not elaborate further, only saying detectives were still working through the investigation.

“With the evidence we have at the scene and what we could see on cameras, we believe his behavior is very volatile,” Spurlock said in response to a question from a reporter at the news conference, adding the sheriff’s office does not believe Devol is seeking anyone else at this point.

The sheriff said the suspect could be seen taking several trips to his vehicle which had multiple firearms, according to detectives.

No known motive for the double-murder was immediately released.

This story was originally published Feb. 9, 2022 by KMGH-TV in Denver, an E.W. Scripps Company.