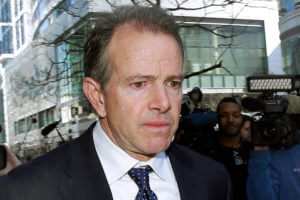 BOSTON (AP) — Another wealthy parent was charged Wednesday with trying to bribe his child’s way into an elite university as a fake athletic recruit, a day after two former college coaches caught up in the nationwide admissions bribery scandal were hit with additional charges.

Amin Khoury, 54, of Palm Beach, Florida, and Mashpee, Massachusetts, in May 2014 paid $200,000 to get former Georgetown University tennis coach Gordon Ernst to designate his daughter as a tennis recruit even though her “tennis skills were below that of a typical Georgetown tennis recruit,” the U.S. attorney’s office in Boston said in a statement.

Khoury is the 57th person charged in the nationwide investigation. He;s charged with mail fraud and bribery. No defense attorney was listed in court records.

The charges against Khoury were announced the day after Ernst was charged in a superseding indictment with three counts of federal programs bribery and three counts of filing false tax returns, according to a statement Tuesday from the office of Andrew Lelling, the U.S. attorney for Massachusetts.

In addition, Jovan Vavic, the former water polo coach at the University of Southern California, was charged Tuesday with conspiracy to commit federal programs bribery, the statement said.

Ernst pleaded not guilty last year to a series of charges, including wire fraud and money laundering, for allegedly accepting $2.7 million in bribes from the scheme’s leader to designate at least 12 Georgetown applicants as tennis recruits.

The new charges say he solicited and received bribes from three other prospective Georgetown applicants, then failed to report a significant portion of those payments on his federal tax returns, prosecutors said.

Voicemail and email messages seeking comment were left with Ernst’s attorney on Wednesday. 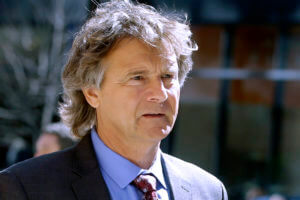 The new charges allege he conspired to commit federal programs bribery by soliciting and accepting bribes to get more applicants into USC.

An arraignment date on the new charges has not yet been scheduled.

The alleged bribes came from William “Rick” Singer, the college admissions consultant at the center of the scheme.

Singer previously pleaded guilty and is cooperating with the government’s investigation.

Dozens of famous and wealthy parents, as well as about a dozen college coaches and athletic administrators, have been ensnared in the investigation dubbed Operation Varsity Blues, which involved large bribes to get undeserving children into elite U.S. universities with rigged test scores or bogus athletic accomplishments.

About 30 parents and eight coaches and administrators have already admitted to the charges, including actress Lori Loughlin and her husband, fashion designer Mossimo Giannulli, who were sentenced to prison last month.