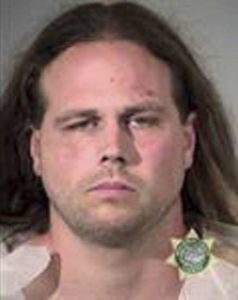 PORTLAND, Ore. (AP) — A man charged with fatally stabbing two men who authorities say confronted him during a racist rant on a Portland, Oregon, light-rail train goes to trial Tuesday, two years after the killings in a liberal city.

Jeremy Christian has pleaded not guilty to charges of murder, attempted murder, assault and other crimes in connection with the 2017 stabbings. Prosecutors say Christian had shouted racist and anti-Muslim slurs at two young, black female passengers, including one who wore a Muslim headscarf.

Christian, 37, is also charged with assault and menacing for shouting slurs and throwing a bottle at a black woman on another light-rail train the day before the stabbings. A judge last year dismissed charges of aggravated murder, a potential death penalty offense, because of a new Oregon law that narrows the definition of aggravated murder.

The stabbings’ racially charged context was a blow for Portland, which prides itself on its liberal and progressive reputation but also grapples with a racist past that included limits on where black families could live and a neo-Nazi community so entrenched that Portland was once nicknamed “Skinhead City.” The deaths were also weeks after a black teen was run down and killed by a white supremacist in a Portland suburb convenience store parking lot — a case that also grabbed headlines.

“The stabbings were felt deeply around Portland because so many people could imagine themselves on that train,” said Lindsay Schubiner, program director at Western States Center, which tracks hate groups. “It felt like an attack on the entire city.”

In the days after the stabbing, photos and video surfaced showing that Christian had recently attended — and spoken at — a rally hosted by a far-right group called Patriot Prayer, whose periodic political events were already causing tension in the city. He was captured on camera making the Nazi salute while wearing an American flag around his neck and holding a baseball bat.

On Facebook, his prolific posts slammed Portland as a place so politically correct that his right to free speech was constantly under assault.

According to court documents, Christian boarded the train during the evening commute on May 26, 2017, and began shouting racist, anti-Muslim and xenophobic slurs at the two young women, one of whom was Muslim.

As his outburst continued, Christian moved toward passenger Taliesin Namkai-Meche, grabbed his cell phone and threw it to the ground. Authorities say another passenger, Micah Fletcher, stood up to intervene and got into a shoving match with Christian, who was taunting the men to “do something” to stop him.

Christian then took out a folding knife and stabbed Fletcher and Namkai-Meche, prosecutors said. Authorities say he also stabbed a third passenger, Ricky Best, who tried to intervene. Namkai-Meche and Best died at the scene of stab wounds to the neck. Fletcher was seriously injured but survived.

Christian stabbed the men 11 times in 11 seconds; he would later tell a court-appointed psychologist during mental health evaluation that he felt like he was on “auto-pilot,” according to court records.

He was arrested a few blocks away.

Christian’s defense attorneys Gregory Scholl and Dean Smith did not return calls or emails seeking comment. Court papers raise the possibility that they may raise self defense in court, arguing that Christian feared for his safety when Fletcher began pushing him towards the light-trail train’s doors.

The defense team may also raise questions about Christian’s mental health. A mental health evaluation unsealed by a judge six months after the attack said he showed signs of post-traumatic stress disorder, anxiety and social dysfunction that had been made worse by stints in prison.

In his interview with the mental health evaluator, Christian said he wasn’t a white supremacist and that he barely noticed the two women. He said he reacted violently because he felt he was about to be beaten up, just as he had been attacked in prison, the document says.

Prosecutors are expected to argue his intent by presenting to jurors evidence from the night before the stabbings, when they say Christian shouted similar insults at a black woman on a different light-rail train and threatened to stab her and a light-rail supervisor who responded to the scene. The woman Maced him and Christian threw a glass Gatorade bottle at her, blackening her eye.

Scholl and Smith dismissed that argument in court motions and pointed out that Christian’s angry rhetoric that night was directed at just about every religious affiliation that exists — and therefore can’t be considered as a motive for what prosecutors say came later.

“In fact, only 3.1 percent of the United States population who claim a religious affiliation are not encompassed by Mr. Christian’s comments,” the attorneys wrote in a pre-trial motion. “As such, they are not indicative of motive, intent or plan/preparation.”

Opening statements in the trial are expected Jan. 28.