LINCOLN, Neb. (AP) — A Nebraska attorney general’s office investigation identified 258 victims who made credible allegations of sexual abuse against 57 Catholic church officials in the state going back decades, including many that high-ranking church leaders knew about and didn’t report to the authorities, according to a report released Thursday.

Prosecutors can’t charge against any current or former church officials with a crime because the statutes of limitations have expired in the vast majority of cases, Attorney General Doug Peterson said at a news conference announcing the findings. In one case where charges are still possible, Peterson said the accuser declined to participate in a prosecution. 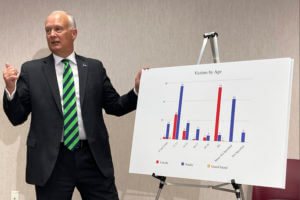 Nebraska Attorney General Doug Peterson discusses the findings of a statewide Catholic church sex abuse investigation on Thursday, Nov. 4, 2021, at a Nebraska Department of Justice office in Lincoln, Neb. The investigation identified 258 victims who made credible allegations of sexual abuse against 57 Catholic church officials in the state going back decades. (AP Photo/Grant Schulte)

The report outlines each known case in graphic detail, stretching from the 1930s to the 2010s. More than 90% of the victims were boys, usually young teenagers who served as altar servers.

“The extent of the physical and psychological harm caused by the perpetrators and the failure of the church to safeguard so many victims is gut-wrenching,” said Peterson, fighting back tears at several points during a news conference.

The investigation identified 57 church officials from Nebraska’s three dioceses who were credibly accused, including 51 priests, four deacons and two teachers. There were 97 documented victims from the Lincoln Diocese, 158 from the Omaha Archdiocese and and three from the Grand Island Diocese.

Peterson said he was frustrated that prosecutors couldn’t file charges against anyone in the church, and would support efforts to loosen or eliminate old statutes of limitation for such crimes. Nebraska has since eliminated statutes of limitation for child sex assaults, but the change didn’t apply retroactively to old cases and the old law prevents those victims from filing lawsuits.

“This has in effect denied these victims justice and I am committed to setting this right,” said state Sen. Rich Pahls, of Omaha.

Pahls promised to introduce a bill during next year’s legislative session “to address this egregious and unacceptable state of affairs.”

In a joint statement, the bishops of all three Nebraska dioceses apologized to the victims and said they had taken steps to try to protect children and vulnerable adults.

“This report also points out mistakes made in the way dioceses received, reported and responded to allegations of sexual abuse in the past,” the bishops said. “We have been committed in recent years to comprehensive measures to protect young people and vulnerable adults, preventing abuse, offering healing for past victims of abuse and fully cooperating with civil authorities in these matters.”

Nebraska authorities launched the investigation and created a victim hotline in 2018 after several accusers came forward with allegations against the conservative Lincoln Diocese, which for years was the only U.S. diocese that refused to participate in annual reviews of sexual misconduct. The reviews were a key reform enacted in response to the 2002 Boston clergy abuse scandal.

Some of the allegations in Lincoln were against the Rev. James Benton, an elderly priest who only retired in 2017 even though church leaders had known about abuse accusations against him for at least 15 years.

Benton’s nephew, Lincoln chiropractor Stan Schulte, said his uncle molested him at a rectory sleepover in the early 1990s when he was a boy.

Another Lincoln man, Jeffrey Hoover, reported a similar experience with Benton during a camping trip in the early 1980s while he and the priest slept in the same bed. Schulte has said he probably never would have been molested if church officials had handled Hoover’s allegations against Benton properly.

Schulte, who attended Thursday’s news conference and has pushed for accountability in the church, said he doesn’t believe the church’s current leaders have done enough to protect the public and that they should be removed from their posts. He said one credibly accused priest has been allowed to live in the Bonacum House in Lincoln, a home for retired priests that’s a short walk from both a public and a private elementary school.

He said another credibly accused priest was assigned to a home in Cedar Bluffs, Nebraska, next to a Boy Scout camp, and that the church isn’t monitoring him and didn’t tell the public.

“If this were to happen in the public school system, and a principal knew for decades that there were teachers abusing children and refused to act, that principal would be asked to step down immediately,” Schulte said. “If the current leadership doesn’t step down, we’re very naive to think that there will ever be any real change.”