SANTA FE, N.M. (AP) — A federal judge on Thursday sought to evaluate the mental health of a woman charged with kidnapping, firearms and terrorism-related counts — nearly four years after authorities arrested her and four other adults from an extended family at a squalid New Mexico compound and recovered the remains of a 3-year-old boy.

Courtroom deliberations about Haitian national Jany Leveille’s mental health took place in Albuquerque at a hearing closed from public view, on the request of her lawyers, to consider whether she understand the criminal charges against her, which she has denied. No updates were provided by the court. 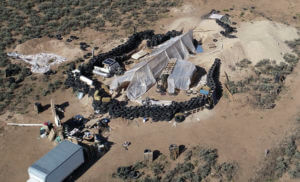 FILE – This Aug. 10, 2018, photo, shows a ramshackle compound in the desert area of Amalia, N.M. A U.S. district court on Thursday, March 10, 2022, is evaluating the mental health of a woman charged with kidnapping, firearms and terrorism-related counts nearly four years after authorities arrested her and four other adults from an extended family at a squalid New Mexico compound while recovered the remains of a 3-year-old boy. (AP Photo/Brian Skoloff, File)

An FBI agent previously testified in a preliminary hearing that Leveille’s two teenage sons told authorities they were trained on how to use firearms and defensive tactics by adult relatives at the compound near the tiny community of Amalia not far from the Colorado state line.

The teens also reportedly said the training was taking place in preparation to launch attacks, linked to a future religious resurrection, against government institutions including federal law enforcement and schools, the agent testified.

A grand jury indictment alleges Leveille and her partner instructed people at the compound to be prepared to engage in jihad and die as martyrs, and that one more relative was invited to bring money and firearms.

Defense attorneys have said their clients would not be facing terrorism-related charges if they were not Muslim.

The deliberations about Leveille’s mental competency took place more than three years after sheriff’s officials and state agents raided the ramshackle encampment in the remote desert surrounded by berms of used tires with an adjacent firing range. They were searching for a sickly 3-year-old who had been reported missing by his mother in Georgia.

Sheriff’s deputies and state agents initially found 11 hungry children and a small arsenal of ammunition and guns. After days of searching, they recovered the decomposed remains of the 3-year-old in an underground tunnel.

Mental health concerns about Leveille and three other defendants have contributed to the delay in preparations for their trials, along with disruptions caused by the coronavirus pandemic.

Leveille’s lawyer, Aric Elsenheimer, declined comment on Thursday. But the lawyer for Siraj Ibn Wahhaj, Leveille’s partner and the father of the deceased child, said her client’s right to a speedy trial has been violated because he has been incarcerated since his arrest in August 2018,

“Our client is innocent of the charges that have been filed against him and the law presumes his innocence,” said the lawyer, Erlinda Johnson. “We are looking for to our day in court and the day that we actually proceed to trial.”

Prosecutors for the case at the U.S. attorney’s office declined to comment on recent developments, though they opposed the motion to prevent members of the public from attending Leveille’s competency hearing.

She has been described in court documents as a leader of the group of extended family members who settled at the compound in late 2017, including her six children. Leveille has resided in the U.S. for more than 20 years after overstaying her nonimmigrant visitor visa, authorities have said.

She was arrested with four other adult defendants in the raid, days before the child’s body was recovered. All except the deceased boy’s father are charged in the child’s kidnapping. U.S. law generally does not allow authorities to charge parents with kidnapping their own children, except in international cases. 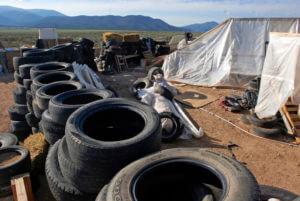 FILE – This Aug. 10, 2018, photo, shows a makeshift living compound in Amalia, N.M. A U.S. district court on Thursday, March 10, 2022, is evaluating the mental health of a woman charged with kidnapping, firearms and terrorism-related counts nearly four years after authorities arrested her and four other adults from an extended family at a squalid New Mexico compound while recovered the remains of a 3-year-old boy. (AP Photo/Morgan Lee, File)

Authorities said the deceased child, Abdul-Ghani Wahhaj, suffered from untreated disabilities as Leveille and Siraj Ibn Wahhaj performed daily prayer rituals over him — even as he cried and foamed at the mouth.

The FBI agent who interviewed Leveille’s two teenage sons also testified that Leveille expected Abdul-Ghani Wahhaj to be resurrected and provide instruction to get rid of institutions that involve teachers, law enforcement and banks.

Leveille is charged with possessing a firearm while living in the country illegally, while the other suspects have been accused of conspiring to provide her with firearms and ammunition.

A brother of Leveille, living in Haiti, has said the group sought to retreat from mainstream U.S. society and that its use of firearms has been misconstrued.

All five defendants are charged with conspiracy to commit an offense against the United States and providing material support to each other as potential terrorists by crossing state lines with firearms and training at the New Mexico compound.

The defendants have denied all charges.

“The defendant’s interest in keeping these medical and personal matters private and confidential outweigh the public’s interest” in having an open hearing, the judge wrote.

Johnson initially ordered Leveille hospitalized in October 2019 for mental health treatment for up to four months in response to concerns about mental illness.