ALBANY, N.Y. (AP) — Former Gov. Andrew Cuomo was ordered by New York’s ethics commission Tuesday to give up millions of dollars a publisher paid him to write a book about his response to the coronavirus pandemic.

An attorney for Cuomo immediately called the action unconstitutional and promised a fight. 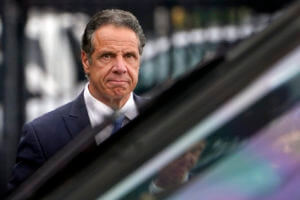 Cuomo was directed to turn over proceeds earned from “American Crisis: Leadership Lessons from the COVID-19 Pandemic” within 30 days under a resolution approved 12-1 by the Joint Commission on Public Ethics.

The order came a month after the commission voted to rescind the ethics approval it had given Cuomo as he entered into the $5.1 million book deal.

“American Crisis” was published in October 2020, months before Cuomo resigned amid allegations he sexually harassed at least 11 women. It was published by Crown Publishing Group, a division of Penguin Random House.

The staff of the commission granted approval of the deal in July 2020, when his counsel told the commission Cuomo agreed to not use any state personnel or resources to produce his book and that he would write it “entirely on his own time.” But complaints later surfaced that state property, resources and personnel were used to prepare, write, edit and publish the book.

Cuomo has acknowledged that state employees helped with tasks including editing the manuscript. But he’s claimed that those employees were volunteering their private time.

Cuomo’s camp promptly challenged the commission’s authority, setting up what could be a lengthy legal battle.

“JCOPE’s actions today are unconstitutional, exceed its own authority and appear to be driven by political interests rather than the facts and the law,” Cuomo attorney Jim McGuire said in a prepared statement. “Should they seek to enforce this action, we’ll see them in court.”

A spokesperson for the attorney general’s office, which would enforce the order, said they are reviewing the commission’s vote “and determining how best to move forward.”

The commission’s order hinges partly on a declaration that its retroactive revocation of its prior approval for the book deal means that Cuomo “is not legally entitled to retain compensation paid to him, in any form, for his outside activities related to the book.”

It doesn’t specify an amount, but says he owes the state an amount equal to whatever compensation he received.

Efforts to claw back the money could be complicated, in part because Cuomo already disbursed $1.5 million to a charity and a trust for his three daughters.

Cuomo disclosed in May that he was paid a $3.1 million advance to write the book and that he was to make another $2 million on it over the next two years under the publishing contract. Cuomo spokesperson Richard Azzopardi had said then that after taxes and expenses, Cuomo netted $1.5 million on the book last year, with $500,000 of the profits donated to the United Way of New York State. The rest was being put in a trust for his daughters.

Spokespeople for Cuomo and Crown Publishing Group did not respond to questions Tuesday about whether Cuomo had received money for the book beyond the initial $3.1 million.

A separate state Assembly investigation released last month found evidence that Cuomo, who resigned in August, had his staff spend copious amounts of time on the project.

Junior and senior staff members told investigators they were asked to perform book tasks during their work day, including transcribing dictations, printing and delivering documents, and attending meetings with agents and publishers. One senior state official sent and received 1,000 emails about the book, the legislative report said.

Azzopardi said those allegations are false.

“This is political hypocrisy and duplicity at its worst. Governor Cuomo received a JCOPE opinion and advice of counsel stating that government resources could not be used — and they weren’t — and any staffer who assisted in this project did so on their own time, which was reflected on their timesheets,” the spokesperson said.