BUFFALO, N.Y. (AP) — Prosecutors were investigating Friday after a video captured police in Buffalo shoving a 75-year-old man who then fell and cracked his head, a confrontation that resulted in the suspension of two officers.

Video from public radio station WBFO of Thursday night’s encounter, which happened near the conclusion of protests over the death of George Floyd in Minnesota, quickly sparked outrage.

It shows a man identified as Martin Gugino approaching a line of helmeted officers holding batons as they clear demonstrators from Niagara Square around the time of an 8 p.m. curfew. Two officers push Gugino backward, and he hits his head on the pavement. Blood spills as officers walk past. One officer leans down to check on the injured man before he is urged along by another officer. Gugino and the officers all appear to be white, but details of their backgrounds were not released. 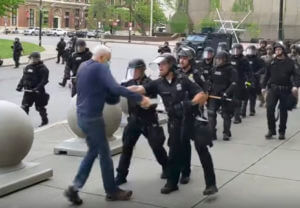 In this image from video provided by WBFO, a Buffalo police officer appears to shove a man who walked up to police Thursday, June 4, 2020, in Buffalo, N.Y. Video from WBFO shows the man appearing to hit his head on the pavement, with blood leaking out as officers walk past to clear Niagara Square. Buffalo police initially said in a statement that a person “was injured when he tripped & fell,” WIVB-TV reported, but Capt. Jeff Rinaldo later told the TV station that an internal affairs investigation was opened. Police Commissioner Byron Lockwood suspended two officers late Thursday, the mayor’s statement said. (Mike Desmond/WBFO via AP)

“Why? Why was that necessary? Where was the threat?” asked Gov. Andrew Cuomo at his daily briefing Friday. The governor said he spoke to Gugino, who had been hospitalized in serious condition. “It’s just fundamentally offensive and frightening. How did we get to this place?”

A hospital official said the man was “alert and oriented,” according to a Friday morning tweet by Erie County Executive Mark Poloncarz.

The video immediately generated outrage, including among elected officials, in the wake of the death of Floyd — a black man who died after a white police officer pressed a knee on his neck for several minutes.

The district attorney’s office “continues to investigate the incident,” officials said in a news release, but the victim could not talk to investigators Thursday night.

Gugino is a veteran peace activist involved with the Western New York Peace Center and Latin American Solidarity Committee, said Vicki Ross, the center’s executive director. His Twitter timeline includes tweets and retweets supportive of progressive causes and critical of police. One tweet from Wednesday read: “The cops should not have clubs. And should not be in riot gear. The National Guard should arrest the police.”

“I can assure you, Martin is a peaceable person,” Ross said. “There is no way that he was doing anything to accost or hurt. He made a judgment to stay out after the curfew because he feels that our civil liberties are so in danger, which they most certainly are.”

Ross said Gugino has been undergoing chemotherapy for cancer.

Buffalo police initially said in a statement that a person “was injured when he tripped & fell,” WIVB-TV reported, but Capt. Jeff Rinaldo later told the TV station an internal investigation was opened.

“When I saw the video, certainly, it was incredibly distressing and very disappointing. You don’t want to see anything like that,” Brown, the mayor, told WIVB-TV on Friday.

The office of state Attorney General Letitia James tweeted that officials there were aware of the video. U.S. Sen. Charles Schumer called for an investigation, according to a statement reported by WIVB-TV.

“The casual cruelty demonstrated by Buffalo police officers tonight is gut-wrenching and unacceptable,” John Curr, the Buffalo chapter director for the New York Civil Liberties Union, said in a statement, adding that it should be a “wake-up call” for city leaders to address police violence.

This story has been updated to correct that the source of the video was WBFO, not WFBO.