COLUMBUS, Ohio (AP) — Ohio’s attorney general says he laments the pain that ensued after he suggested in a nationally televised interview that an account of a 10-year-old rape victim who sought an abortion in Indiana might have been a fabrication.

In a year-end interview last week with The Associated Press, Republican Attorney General Dave Yost maintained that his comments pertained to “ a one-source newspaper story ” and not “a crime report or crime victim, because that didn’t exist to the best of anyone’s knowledge at the time that I spoke.” 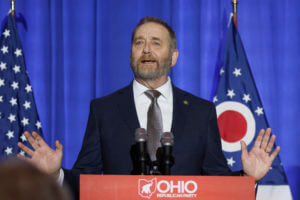 FILE – Republican Ohio Attorney General Dave Yost speaks during an election night watch party on Nov. 8, 2022, in Columbus, Ohio. In an interview with the Associated Press Wednesday, Dec. 14, Yost says he laments suffering he caused by suggesting in a nationally-televised interview that a 10-year-old rape victim from Ohio who had sought an abortion in Indiana might have been a fabrication. (AP Photo/Jay LaPrete, File)

“But as I’m looking back here with some distance, I realize that what I said was not what people heard, and what people heard created a lot of pain — and I regret that deeply,” Yost said Wednesday. “Now, I’m delighted that that guy is in the dock and her rapist looks like he’s headed for a well-deserved life sentence in prison, where he belongs. But I’ve got nothing in my heart but compassion and grief for what that little girl went through.”

What Yost said in a July 11 Fox News interview was that he hadn’t heard a “whisper” about such a case from the law enforcement agencies he oversees as Ohio’s top cop. He went on to say, “This young girl, if she exists and if this horrible thing happened to her — it breaks my heart to think about it — she did not have to leave Ohio to find treatment.”

Police arrested a man two days later on charges of raping the girl.

Yost and other Ohio Republicans were at the time defending upheaval surrounding reinstatement of Ohio’s restrictive 2019 near-ban on abortions after the U.S. Supreme Court’s decision to overturn Roe v. Wade. President Joe Biden had highlighted the 10-year-old’s case that Friday, at the signing of an executive order aimed at protecting access to abortion as restrictive state laws began to kick in.

Reelected last month to a second four-year term, Yost is set to become president of the National Attorneys General Association in January. He said he doesn’t see the era’s hyperpartisanship as a deterrent to Republican and Democratic attorneys general working together on important issues — as they have a history of doing on national opioid litigation, data privacy breaches and medical devices.

Yost also said that he doesn’t see it as alarming when attorneys general — who often are seen as less partisan than other offices, even if elected — from the same political party band together to use their offices to act on particular issues.

“Most of them are elected, and I think you typically see elected officers that reflect their constituencies,” he said. “It’s not surprising to me that, as we see increasing division and disagreements nationally with the citizens, that those arguments spill over into law and into attorneys general’s offices.”

Yost said he does not anticipate the national association wading into the debate over whether one state should sue another over its election results, or over other election-related issues sparking legal challenges across the nation.

“Remember, the Constitution provides original jurisdiction for one state to sue another, so the founders clearly thought that there would be times when states had conflicts with each other that had to be resolved by a national authority,” he said. “Now, that being said, it’s hard for me to imagine a realistic set of facts that would justify that kind of intervention in another state’s election results.”

Yost’s presidential initiative as head of the national attorneys general group will involve mustering attorney general resources and ideas across all 50 states to help military veterans, including with pro bono legal services. He said developing “new rules of the road” for Big Tech companies also appears to be a shared priority among the offices for the coming year.