The Justice Department under Attorney General William Barr improperly withheld portions of an internal memorandum Barr cited in publicly announcing that then-President Donald Trump had not committed obstruction of justice in the Russia investigation, a federal appeals panel said Friday.

The department had argued that the 2019 memo represented the private deliberations of its own lawyers before any decision had been formalized, and was therefore exempt from disclosure. A federal judge previously disagreed, ordering the Justice Department to provide it to a government transparency group that had sued for it, prompting an appeal last year by the Biden administration to a higher court. 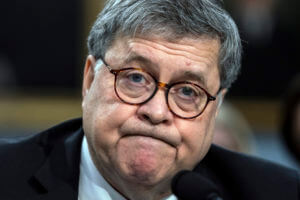 Attorneys for the Justice Department didn’t immediately respond to an email message seeking comment on the ruling. The department can appeal the ruling to the full court.

At issue in the case is a March 24, 2019, memorandum from the head of the Justice Department’s Office of Legal Counsel, or OLC, and another senior department official that was prepared for Barr to evaluate whether evidence in special counsel Robert Mueller’s investigation could support an obstruction of justice prosecution of the president.

Barr has said that he looked to that opinion in concluding that Trump did not illegally obstruct the Russia probe.

The Justice Department turned over other documents to Citizens for Responsibility and Ethics in Washington as part of the group’s lawsuit, but declined to give it the memo. Government lawyers said they were entitled under public records law to withhold the memo because it reflected internal deliberations among lawyers before any formal decision had been reached on what Mueller’s evidence showed.

But U.S. District Judge Amy Berman Jackson said last year that those arguments were disingenuous because the memo was prepared for Barr at about the same time as a separate Justice Department letter informing Congress and the public that Barr and other senior department leaders concluded that Trump had not obstructed justice.

She said the memo could therefore not have been “predecisional” in nature if the Justice Department had already decided that there would be no obstruction case.

The government said it had indeed already concluded that there would be no obstruction prosecution since Justice Department legal opinions say a sitting president cannot be indicted. But it said the memo concerned a separate issue: whether the evidence Mueller had collected could support a conclusion that Trump had obstructed justice.

In its ruling Friday, the appellate panel wrote that, had Justice Department officials made clear to the court that the memo related to Barr’s decision on making a public statement about the report, rulings in the case may have been different.

“Because the Department did not tie the memorandum to deliberations about the relevant decision, the Department failed to justify its reliance on the deliberative-process privilege,” according to the ruling, by an unsigned panel of judges from the U.S. Court of Appeals for the District of Columbia Circuit.

Barr and other senior officials concluded that Trump’s actions didn’t amount to obstruction, and the attorney general shared that assessment with Congress soon after the memo was complete. Mueller’s team did not reach a conclusion on whether Trump had obstructed justice.

Appellate judges also noted that their ruling was “narrow,” saying that it should not be interpreted to “call into question any of our precedents permitting agencies to withhold draft documents related to public messaging.”

Woman convicted of killing a woman to take her unborn baby