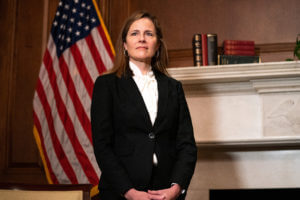 WASHINGTON (AP) — A scant two weeks after her nomination, Judge Amy Coney Barrett goes before a Senate committee that’s bitterly split along partisan lines over whether the Supreme Court vacancy created by Justice Ruth Bader Ginsburg’s death should be filled now or should await the winner of the Nov. 3 presidential election. The Senate Judiciary Committee’s hearings are taking place on an accelerated timeline because President Donald Trump and Senate Republicans want her on the bench by Election Day. Adding to the swirl of politics around the nomination is the coronavirus pandemic and the role it might play. Barrett was introduced as the nominee at a Rose Garden ceremony linked to a cluster of virus cases, including those of Trump and his wife, Melania.

Viewers should expect to see the 48-year-old Barrett portrayed by Republicans as a principled jurist and person of faith in the mode of her mentor, conservative Justice Antonin Scalia, and someone who will decide cases based on the law, not her policy preferences. Democrats will spend a lot of time talking about the unseemly rush to fill Ginsburg’s seat. But they also will label Barrett a results-oriented conservative whose ascension to the high court would entrench a conservative majority bent on undoing abortion rights, loosening gun restrictions and turning back the clock on environmental regulations and anti-discrimination laws.

Lawmakers know the public is watching, but as the hearing gets going and lawmakers seek to probe the nominee’s views, they often slip into using legal jargon and refer to past Supreme Court cases in shorthand. It can sound as though they’re talking in code. Expect senators to use these terms at Barrett’s hearing, starting Monday:

These cases from 1973 and 1992, respectively, are the two main decisions on abortion rights. Barrett is the most open anti-abortion nominee to the Supreme Court in decades. She is certain to be asked repeatedly whether the cases were decided correctly, and whether they should be overturned, She’s not likely to answer either question during the hearings. Barrett signed an anti-abortion newspaper ad in 2006, was a member of Notre Dame’s Faculty for Life and has cast two anti-abortion votes as an appellate judge.

In Latin, it means to stand by things decided. It’s the legal principle that judges use to base decisions on earlier ones. When it comes up at confirmation hearings, it’s often in reference to abortion rights and it’s usually a way of asking if a nominee will overturn certain decisions such as Roe. Nominees invariably invoke stare decisis, or refer to something as settled law, to try to reassure senators that they have great respect for Supreme Court precedents, without committing to preserve any specific one. Respect for precedent, however, has its limits. Almost every court opinion raising the issue of abiding by precedents or getting rid of them invokes a line from a 1991 Supreme Court opinion: “Stare decisis is not an inexorable command.”

The court’s 2015 decision declared a nationwide constitutional right of same-sex couples to marry. Barrett has spoken approvingly of the conservative dissenting voices in the case who argued that states should set the rules on marriage, not unelected judges. The issue became newly prominent last week when Justice Clarence Thomas, joined by Justice Samuel Alito, wrote that the 2015 decision “enables courts and governments to brand religious adherents who believe that marriage is between one man and one woman as bigots.” Thomas suggested the court needs to revisit the issue because it has “created a problem that only it can fix.” Until then, he said, the case will continue to have “ruinous consequences for religious liberty.”

That’s the shorthanded reference to the Obama-era health law, the Affordable Care Act, otherwise known as “Obamacare.” The Supreme Court will hear a Trump administration-backed challenge to get rid of the law a week after the election. A lot of talk will focus on the law’s now-toothless mandate to require people to have health insurance or pay a penalty. In 2017, Congress got rid of the penalty, a decision that gave rise to the latest court challenge. The bigger concern is that if the court says the mandate as it now stands is unconstitutional, it will strike down the rest of the law with it. So Democratic senators in all likelihood will talk a lot about the threat to another provision of the law prohibiting discrimination against people with preexisting health conditions. Barrett has been critical of Chief Justice John Roberts’ 2012 opinion upholding the law and his 2015 opinion that preserved subsidies for millions of people to pay for health insurance. “I think the dissent has the better of the legal argument,” she said in 2015.

It refers to a judge’s decision to not take part in a case, usually because that judge participated in it at an earlier stage, or has a financial or personal conflict. Democrats are going to press Barrett to pledge to withdraw from any election-related cases, and perhaps from any involving abortion. She is not likely to commit to do so.

A 1984 Supreme Court ruling, in a case involving the Chevron oil company, says that when laws aren’t crystal clear, federal agencies should be allowed to fill in the details. That’s what agencies do — on environmental regulations, workplace standards, consumer protections and even immigration law. But a growing conservative legal movement has questioned the Chevron decision. Several conservative justices have expressed some support for limiting agencies’ discretion. If a future Supreme Court were to limit the Chevron ruling, it would mark a big change in the law that would potentially make it harder to sustain governmental regulations.

OK, that’s not a legal term, but it will come up anyway. Roberts famously compared judges to umpires during his 2005 confirmation hearing, saying neither makes the rules, but rather both just apply them. He said he would remember, if confirmed, that his job is “to call balls and strikes.” Lawmakers love to ask nominees about this analogy.

“LET HER ANSWER THE QUESTION”

Again, it’s not a legal term. Expect the committee chairman, Sen. Lindsey Graham, R-S.C., or the Republican sitting in his place, to interject when Democrats’ questioning of Barrett gets especially heated or they try to cut in if they feel Barrett is trying to filibuster. Question time is limited and senators often feel free to jump in to move the questioning along.