Moved by the videotaped shooting of Jacob Blake, many professional athletes — some who had previously donned Black Lives Matter T-Shirts and knelt for the national anthem to protest racial injustice — made a more dramatic statement.

They refused to play.

NBA players led the way Wednesday and Thursday by sitting out of scheduled playoff games in the “bubble” in Florida, the league’s answer to finishing up the season amid the coronavirus pandemic. The movement quickly spread to the other professional sports.

“We are scared as Black people in America,” LeBron James said. “Black men, Black women, Black kids. We are terrified.”

Athletes similarly came together after the death of George Floyd, another Black man who died when an officer pressed his knee into his neck for more than seven minutes. Some players knelt during the national anthem or stood in silence, fists raised, while others wore Black Lives Matter T-shirts or had names of Black people killed by police on their jerseys.

But then the cellphone video of Blake getting shot in the back seven times by police in Kenosha, Wisconsin, about 40 miles south of Milwaukee, emerged.

Athletes say the moment has forced them to act. Here’s a look at what they are doing across the major professional sports to call for an end to racial injustice: 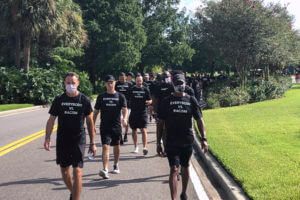 NBA: The Milwaukee Bucks set off a wave of postponements in professional sports Wednesday, when players refused to take the court for a playoff game against Orlando. The two other playoff games for that day were also postponed, as were the three games set for Thursday.

NBA Executive Vice President Mike Bass issued a statement that said: “We are hopeful to resume games either Friday or Saturday,” and added that a group of players and representatives from the teams in the bubble were going to hold a video conference call with the league’s front office and union officials about the next step.

MAJOR LEAGUE BASEBALL: Seven games were postponed Thursday, a day after three games were called off.

“In this world, I’ve always believed, there’s two things you can’t live without. It has nothing to do with food and water. It’s love and hope. And I don’t think we’re doing a good job in our country giving that to everyone and I think that needs to be the focus here,” Philadelphia Phillies manager Joe Girardi said.

NFL: Nine teams canceled practice Thursday. The league is set to start its season on Sept. 10.

NHL: Announced Thursday that it postponed two days of playoff games. The league’s games went on as scheduled Wednesday. San Jose Sharks forward Evander Kane, who is Black, was vocal about the issue on Twitter, saying it would send “a clear message that human rights take priority over sports.”

GOLF: The PGA Tour event at Olympia Fields outside Chicago — less than 100 miles from Kenosha, Wisconsin — went on as scheduled Thursday. Cameron Champ, who has a Black father and a white mother, wore a black shoe and a white shoe. On the white shoe he wrote: “Jacob Blake BLM.” The LPGA Tour is set to begin play Friday in Rogers, Arkansas.

TENNIS: Naomi Osaka will play in the Western & Southern Open semifinals, after all. A day after saying she would withdraw from the hard-court event to protest the “continued genocide of Black people at the hand of the police” — prompting the tournament to call off all of Thursday’s matches — the two-time Grand Slam champion and former No. 1-ranked player changed course. Her agent confirmed that Osaka will face No. 14 Elise Mertens when play resumes at the tournament Friday with the semifinals. The finals were shifted from Friday to Saturday. 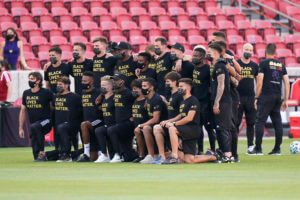 Players from Los Angeles FC pose for a group photo on the field prior to the announcement that their game against Real Salt Lake was called off Wednesday, Aug. 26, 2020, in Sandy, Utah. (AP Photo/Rick Bowmer)

WNBA: The six WNBA games set for Wednesday and Thursday were postponed in the league’s bubble in Bradenton, Florida. Players from the Washington Mystics wore T-shirts that had Blake’s name on the front and seven holes in the back. Later, players held a candlelight vigil. The league had just passed its halfway mark of the 22-game season.

MLS: Five of six scheduled matches Wednesday were postponed. Players for the other game, between Nashville SC and Orlando City, said they had already taken the field in preparation for their game before a collective decision was made. The MLS had no games scheduled for Thursday.

“We don’t want lip service anymore,” said San Jose’s Chris Wondolowski, who is of Native American descent. “It’s time for actual actions to be made, and time for a change.” 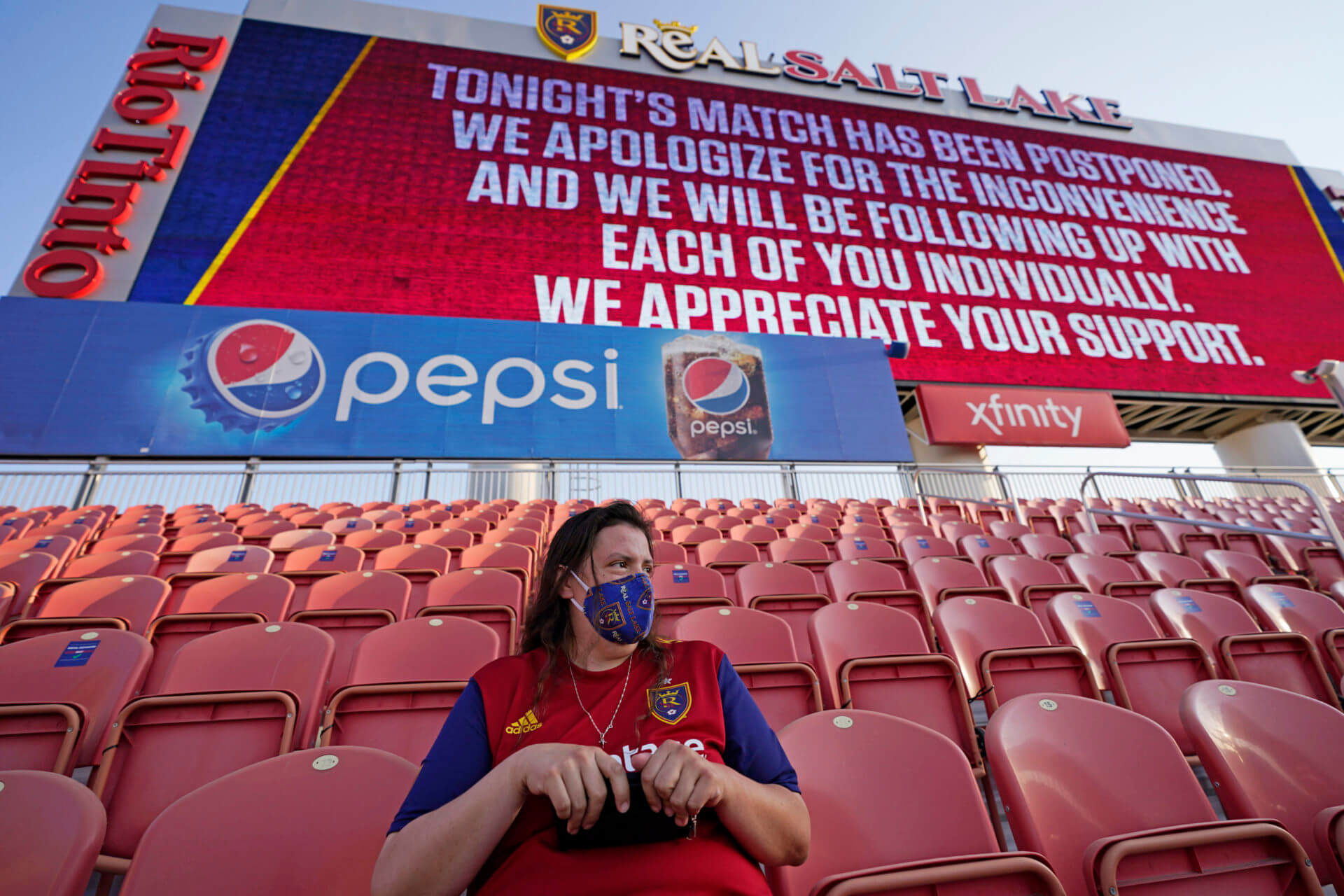 A fan sits in the stands after the scheduled game between Real Salt Lake and Los Angeles FC was postponed Wednesday, Aug. 26, 2020, in Sandy, Utah. Major League Soccer players boycotted five games Wednesday night in a collective statement against racial injustice. The players' action came after all three NBA playoff games were called off in a protest over the police shooting of Jacob Blake in Wisconsin on Sunday night. (AP Photo/Rick Bowmer)
MORE NEWS