WASHINGTON (AP) — Crack cocaine trafficking kingpins convicted more than a decade ago can ask courts to reduce their prison terms under a 2018 federal law. The Supreme Court on Tuesday sounded skeptical that people convicted of older low-level crack crimes can do the same.

VIDEO: There’s a disparity between the laws for crack cocaine and powder cocaine that have impacted African American communities especially hard. Now, the Supreme Court is determining the reach of those laws that were created back in the 1980s. Published May 5, 2020 (Court TV) 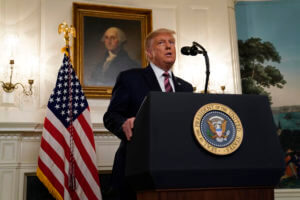 President Donald Trump speaks during an event on judicial appointments, in the Diplomatic Reception Room of the White House, Wednesday, Sept. 9, 2020, in Washington. (AP Photo/Evan Vucci)

But it specifically addresses crack possession only above 5 grams for one category of possession and above 50 grams for another category, leaving some justices doubtful that it’s meant to apply to everyone.

“You get me out of this. I’d love to get out of it. I mean, I think they were much too high. I understand that. But I can’t get away from this statute. So you convince me, I hope, that I’m wrong,” Justice Stephen Breyer said, pleading with Andrew Adler, a federal public defender from Florida.

The justices had an unusual case in front of them for their final arguments of the term — and perhaps the last, coronavirus-affected remote session if the justices can return to the courtroom in October.

Adler’s client, Tarahrick Terry was arrested with 3.9 grams of crack on him in 2008. He is in the final months of his prison term, no matter what the court decides. And he apparently is serving his remaining time on home confinement, according to the Biden administration.

There may be no more than 200 people like Terry still serving time, Justice Department lawyer Eric Feigin told the court Tuesday.

Still, the court agreed to decide Terry’s case and resolve a disagreement among lower courts over whether the law gives people who had less than 5 grams of crack on them the same opportunity open to those convicted of possessing more, or much more, crack. 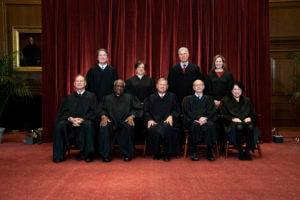 Chief Justice John Roberts said he couldn’t understand why Congress would want to deny that chance to “the least culpable offenders.”

The law, like the Fair Sentencing Act of 2010, was partly aimed at addressing disparities, which fell disproportionately hard on Black people, in the treatment of people convicted of crack and powder cocaine offenses.

The case only affects people whose crimes took place before August 2010 because the Fair Sentencing Act took effect then and covered crimes committed from that point forward.

The switch drew some pointed questions from the justices. A perplexed Breyer wondered “why did the government argue what it argued?”

Adam Mortara, a lawyer appointed by the court to argue against Terry’s position after the administration changed sides, replied: “Your Honor, I am here to explain many things. The behavior of the United States Government in this case is not one of them.”